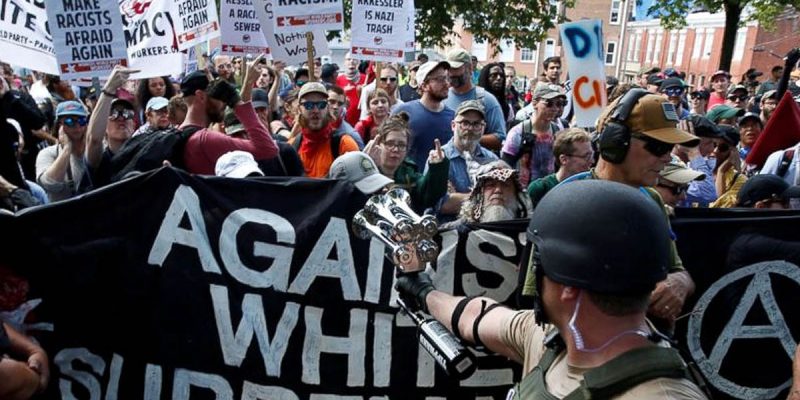 Let me open this by rejecting the premise the Left has presented through their domestic partners in the established media, particularly in the aftermath of the mess in Charlottesville over the weekend, that you must choose to sympathize with either the white supremacists or the Antifa protesters.

You don’t have to associate with either band of scoundrels.

We know the white supremacists represent the worst in society and many are very disturbed individuals who cling to a false sense of racial superiority to validate their self-worth.

These people are not conservatives.  They have played no role in the Republican Party or the conservative movement.  Donald Trump, both as a candidate and as president, has condemned BY NAME racist organizations and individuals, to say nothing of state parties and high profile Republican politicians.

It’s never enough for Trump’s critics because they have a false political narrative to disseminate and prop up.

Any claim by a white supremacist to represent the “Right” is absurd and is only advanced by a partisan and dishonest established media in their attempt to libel conservatives and vilify conservatism.

Not a single prominent conservative figure is associated with this bottom element of American society, but that has not stopped the media from feting the leaders of fringe racial identity groups with non-stop press coverage.

Funny how the media is so inclined to take a discredited racist at his word.

Nor are the white supremacists true Christians as they do not recognize all people as being equally created children of a loving God.

That conservatives must repeat these denunciations of bigots is not so much a reflection of us but of a media hellbent to taint any opposing voice to the progressive agenda.

The Antifa protestors are not peaceful people.

These are the same political goons who physically and verbally harassed Republicans attending campaign rallies, national conventions, and inaugural events.

They want to convey to their political opponents that they will never feel safe and then slander them with accusations of bigotry to justify their violent behavior.

The Antifa operation consists primarily of Marxists and anarchists.  These are not patriots but radicals who rally against the Confederate symbols while at the same time burning the US flag.  I’ve seen these activists engage in this behavior in New Orleans, at protests at Lee Circle and during the removal of the Beauregard statue outside of City Park.

Their opposition to the Confederate monuments is the beginning of a long march to delegitimize America’s Founding Fathers and the nation’s first principles represented in the Declaration of Independence, the Constitution, and the Bill of Rights.  President Trump to his credit has recognized the trend and has forcefully challenged the belligerent media on this count.

The media rarely reports on the Antifa’s bad behavior and often conceal the Communist insignia they proudly wave at their gatherings. It is truly amazing to see how the news cameras never capture these proud Bolshevik 2.0’s who are front and center about their political extremism.

But there was a third set of villains in Charlottesville that has thus far escaped criticism and well-deserved scrutiny: the local government of Charlottesville.

There was a similar situation in New Orleans a few months ago when the Antifa activists participated in a march on Lee Circle led by racialist political gadfly Malcolm Suber.

Despite the fact that there were white supremacists still holding up at the base of Lee Circle, the New Orleans Police Department managed to keep the two acrimonious groups separated.

Aside from a pepper spray attack by an Antifa activist on a woman who supported keeping the Lee statue in place and a lot of curse words and spittle hurled, there were no major incidents and thanks to the strategic placement of Louisiana State Police units, the Antifa activists were dissuaded from any inclination of storming on to the interstate.

The statues of Jefferson Davis, Robert E. Lee, and PGT Beauregard did not survive, but all of the participants in the protests did.

What happened in Charlottesville was sadly another story.

It was as if Mayor Mike Singer and the Charlottesville police wanted a full-scale reenactment of the street battles between extremists during the Weimar Republic.

But don’t just take my word for it, ask the anti-white supremacist protestors and ACLU.

Hawk Newsome of the New York wing of the BLM told CNN that the police were a block removed from the clash and “It’s almost as if they wanted us to fight each other.” That’s right, BLM even complained about the lack of engagement of law enforcement!

Other marchers expressed the same disbelief about local law enforcement’s “hands off” approach that allowed things to escalate until Heather Heyer was killed when white supremacist James Fields plowed through demonstrators with his car.

Singer and the city police department’s leadership should be investigated for their roles in preventing law enforcement from separating the battling factions.

Heather Heyer and her loved ones deserve justice. That includes a trial and all but certain conviction of the hate-filled man who was behind the wheel of the car that killed her, AND an investigation into what the city and police knowingly did to expose marchers to vulnerability.

There’s not a lot New Orleans does right but the Crescent City was better prepared for their contentious day than Charlottesville was.

And that speaks volumes about Charlottesville and its leadership.

Interested in more national news? We've got you covered! See More National News
Previous Article New Orleans Drainage Is So Bad It Is Hurting Jefferson Parish
Next Article Texas Special Session Has Come To An End – What Passed and Failed