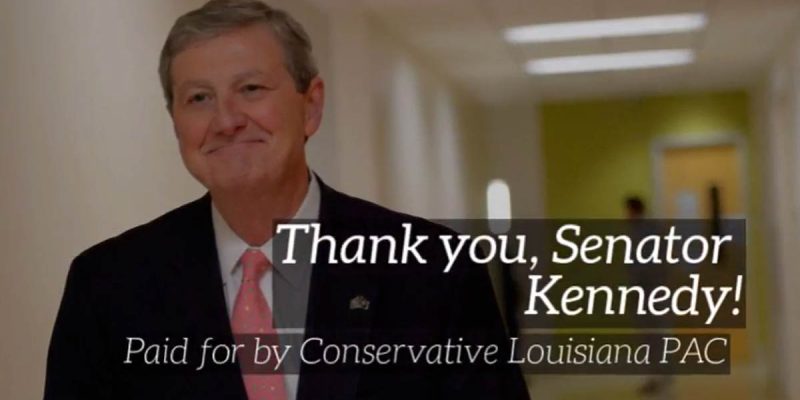 You can’t look at that ad without thinking, “So what’s he running for?”

John Kennedy has had his name associated with a run for Governor of Louisiana in almost every cycle where there has been a contested election for the last 25 years. He was widely thought to be one of the frontrunners for the 2015 race, until David Vitter decided to get in and foreclosed the opportunity for him (in retrospect, Kennedy should perhaps have stayed in the race in 2015; he might well have fared better than Vitter did). And for the past year or so, the political grapevine has been delivering rumors that Kennedy will inevitably enter the 2019 race.

He’s done nothing to dispel those rumors. In fact, Kennedy’s continuing focus on issues local to Louisiana has only fueled them. When he goes on KEEL Radio in Shreveport, as he did earlier this week, to trash Mitch Landrieu for a lack of focus on his day job running New Orleans, and when he wades waist-deep into the BRAVE controversy in Baton Rouge, for example, or when he persistently opines on the state’s budget situation to the detriment of current governor John Bel Edwards, it’s only natural that people assume Kennedy will be getting into the 2019 race.

In any other state but Louisiana it would be unthinkable for a sitting U.S. Senator to go back home and run for governor. Here, it could happen for two straight gubernatorial election cycles if the rumors about Kennedy are correct.

While that’s not a particularly salutary phenomenon for the state – what you want, after all, is for your congressional delegation to achieve seniority and gain influence in the House and Senate which can be used to deliver both a healthy share of resources and a set of national policies which reflect the values of the majority of your state’s voters, and having sitting Senators running for Governor is not a development which particularly moves the needle on gaining seniority for that delegation – it might be an asset in the Republican project of getting Edwards out of the governor’s mansion.

At the moment Edwards has, per a Morning Consult poll last month, a 58 percent approval rating. That number is down from an approval rating in the mid-60’s before the last regular legislative session, and it’s thought by many Edwards has only a “soft” 58 at that – in May, a Southern Media and Opinion Research poll had him at 54 percent. Most Louisiana governors lose popularity before leaving office; in fact, the majority start with stratospheric approval and have it nose-dive at some point in their tenure. Bobby Jindal went from the 70’s to the 20’s in his second term; Kathleen Blanco went from virtually unbeatable to not even bothering to run for re-election after Katrina hit in the middle of her term. Mike Foster’s popularity held up a little more than those who followed him, but there was a public perception he had disengaged from the job in his second term and he suffered for that. Edwin Edwards couldn’t even run for re-election in 2005.

In the case of Foster and Jindal their popularity lasted into a second term. It’s not invalid to suggest that had more to do with an ideological orientation matching that of the electorate in Louisiana than any loyal public approval. This is a red state, after all.

At the moment there isn’t anything on the horizon which would take Edwards out of the running for re-election – though you can never know if a Katrina might come along. We haven’t seen any clarifying developments to date on the federal investigation into Edwards’ brother Daniel, the sheriff in Tangipahoa Parish; one could conceive a scenario in which that investigation becomes an avalanche, but no one should count on it.

Meaning that the most likely forecast for 2019 is an incumbent Democrat governor who will have his party more or less uniformly behind him, with an intraparty challenger highly unlikely, and a popularity which could still be above 50 percent but probably not the 58 percent the Morning Consult poll found.

You can’t assume you’d beat that incumbent governor, though it’s certainly doable. You need a very formidable candidate to do so, and you’d need all the different Republican and independent factions to line up behind that candidate. Meaning you can’t afford to have multiple Republican hopefuls entering the fray and turning the 2019 race into a redux of the 2015 campaign, in which Edwards skated to an 18-point lead on the day of the jungle primary and subsequently walked into the governor’s mansion after Vitter, Scott Angelle and Jay Dardenne had cut each other to ribbons.

And because policy is not what wins state elections in Louisiana, you need someone who can own news cycles with a big megaphone and the skill to entertain the voting public.

Edwards has to go the way of Edwin Edwards and Blanco in order for a nasty intra-Republican jungle-primary fight to be affordable. Otherwise the GOP has to settle on one candidate who can move the electorate.

We’re going to have a new state party chairman next spring. Perhaps that new chairman will have the political stroke to sit all the potential candidates – whether that group includes a Jeff Landry, a Garret Graves, a Ralph Abraham, a Mike Strain, a Conrad Appel, a Scott Angelle or a Stephen Waguespack, all of whom being names thrown around as potential candidates at some point or another – down in a room and broker an agreement everyone can live with. But failing that, the only Republican figure in state politics with the popularity, stature and fundraising capacity to clear the field is probably Kennedy.

And maybe that’s what this web ad is all about.