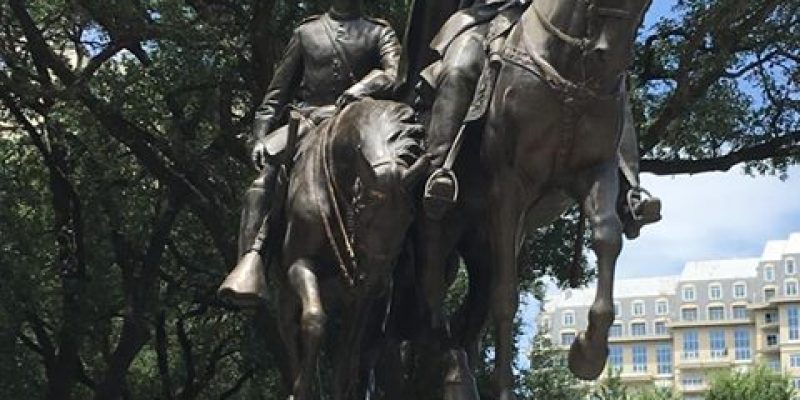 Even before the deadly protest in Charlottesville, the city of Dallas had begun looking into removing Confederate statues around town. Instead of removing them outright the city is hoping to move statues like the Robert E. Lee statue now in Oak Lawn’s Lee Park and the Confederate War Memorial in Pioneer Park Cemetery downtown to what they believe are more appropriate and less public venues.

“It’s easy to jump on the bandwagon and say tear them down,” said Mayor Mike Rawlings. “But I hesitate, and I do that because I realize that the City of Dallas is better is stronger when we are united.”

One potential spot for the relocation is a Confederate cemetery in south Dallas where 55 Confederate soldiers are buried.

According to historian Michael Phillips, author of White Metropolis: Race, Ethnicity, and Religion in Dallas, 1841-2001, who is gathering signatures for an open letter from scholars and religious leaders:

“Monuments in public spaces represent what the city, county, state or nation seeks to represent as its core beliefs. Monuments work to shape identity.”

Philips holds that every Confederate Monument “loudly proclaims… the enduring values of this place, this city, and this people is white supremacy.”

Joining the city of Dallas in this discussion is the Dallas Holocaust Museum who hopes to advise the council of options.

According to board member attorney Brian Lidji in an interview with WFAA, he believes the Jewish community can bring a lot to the discussion. But there is one aspect he believes he brings above all others.

“Empathy…you know, a little understanding about how it feels on the other side.”

Lidji believes he and others from the Dallas Holocaust Museum can place themselves in the shoes of descendants of slaves.

“Lee Park was a very fun park to go to when I was growing up,” he said. “I never associated it with anything ugly, but if one day I went there, and there was a statue of Adolf Hitler, I would say a picnic wouldn’t be quite as much fun or relaxing.”

The discussion is sure to ramp up quickly in light of recent violence.

Interested in more news from Texas? We've got you covered! See More Texas News
Previous Article Texas Rig Permitting Has Doubled Thanks to Permian Shale
Next Article Is The US Attorney’s Office In DC Trying To Throw The Awan Case?