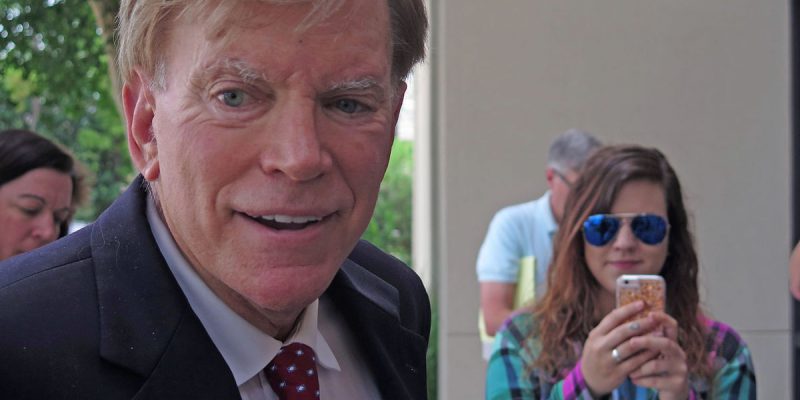 One of the nasty side-affects of deception is you don’t realize it when you’ve been deceived. No one intentionally believes something untrue. But we all suffer from differing degrees of deception. To believe otherwise is pure arrogance. We’ll connect this to David Duke shortly.

Truth is a force that brings clarity, wisdom, and freedom. Believing a lie does the opposite. It leads to bondage, bad decision making, and misery. One of the keys to discerning truth from lies is humility. You have to admit you don’t know it all. Secondly you have to believe there is such a thing as truth. That there are absolutes, right and wrong, real and counterfeit.

There’s an entire political movement based on the premise there is no such thing as truth. They believe we each have our own truth. What’s true for you might not be true for me. How foolish!

This political movement goes by many names but it is most commonly referred to as leftism. Most leftists reside in the Democrat Party and as Ronald Reagan once said about them they believe so many things that simply are not true. Which makes sense since leftists don’t believe in the existence of truth. It’s hard to find something you don’t even think exists.

One of the biggest lies the left promotes is that we are a nation of racists. This is demonstrably untrue. America is the least racist nation on the planet today regardless of what the media and Democrats tell you. Minorities do better economically here than any other country. We get along better despite race-baiting types like Mitch Landrieu, Silky Slim, and David Duke. We are more integrated than any other country. The fact that our melting pot country with so many different ethnicities works is nothing short of miraculous. I’ll admit it wasn’t always the case but it certainly is now. And now is what matters.

Millions have been deceived into believing the “we are a nation of racists” lie and that is now the oxygen that drives the left and fuels the Democratic Party. Their followers believe they are victims, living in an oppressive country flowing with the “White Privileged.” They’ve been convinced they must vote for Democrats to protect themselves from the evil, racists, conservative Republicans.

There are few things more debilitating than believing you are a victim. If the left is about anything it is about convincing people they are oppressed and victims. It’s all they got. They have no other ideas or solutions. But as long as millions of Americans believe we are a nation made up mostly of racists the left will continue to have power.

This is why David Duke matters. Duke was right in the middle of what happened in Virginia this past weekend. He is everything the left could ask for to boost their false narrative. He is misguided, disturbed, and an authentic racist. I wonder if the simple-minded Duke realizes he is nothing more than a useful idiot for the left. I doubt it. It’s difficult to see clearly when your heart is so full of hatred.

What Duke is not is typical. He is an anomaly and rare. Think about it. How many Nazis or white supremacists do you know personally? But the media loves the David Duke story and plays it up as though the half-witted loon is typical of conservatives and Republicans. This is why David Duke matters.

​Dan Fagan is a former television news reporter, journalism professor, newspaper columnist, and radio talk show host. He grew up in New Orleans and currently lives there. He is a regular contributor for The Hayride. If you have a news tip for Mr. Fagan you can reach him at [email protected]mail.com or 504-458-2542.