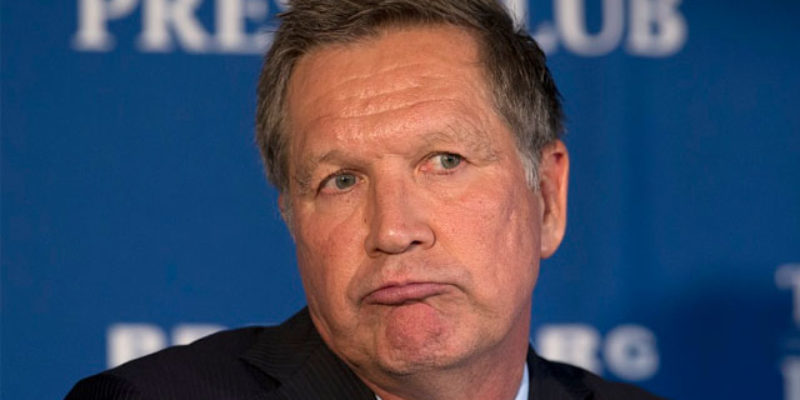 There is a scoop, of sorts, out there about the 2020 presidential election – it seems someone thinks John Kasich and John Hickenlooper, the Democrat governor of Colorado, are going to get together to offer some sort of No Labels/fusion independent ticket, and they’re touring the country now to set the foundation for it.

Ohio Gov. John Kasich (R) and Colorado Gov. John Hickenlooper (D) — “the Johns,” as insiders are calling them — have been making a flurry of joint appearances to talk about state-driven improvements to health care.

But Axios has learned that their duet is part of an alliance that’s gaining momentum toward a possible joint independent bid for president in 2020, likely with Kasich at the top of the ticket.

The piece, by Mike Allen, goes on to talk about all the issues a Kasich-Hickenlooper ticket would focus on, and then contains a little bit of reaction from both sides of the aisle over the possibility of an independent run…

Why it matters: National Dems so far haven’t capitalized on Trump’s record unpopularity and obsession with his base. But this is a creative coupling that’ll get a ton of airtime, and maybe even traction.

The pushback: Some establishment Dems are apoplectic about the idea of Hickenlooper teaming up with a Republican. One top strategist told me: “No Dem wants Kasich anywhere near our ticket. Sounds like a No Labels fantasy, but moderate Dems would hate it.”

One can imagine why establishment Democrats would be furious about Hickenlooper signing on to Kasich’s independent bid. Jim Geraghty of National Review breaks down why this could be the greatest gift to Donald Trump imaginable…

If you’re a vehement Trump foe, you want the anti-Trump vote split in as few ways as possible. Whether or not the Green Party re-nominates Jill Stein, there will be a Green Party nominee, and that nominee will almost certainly be insisting that the Democratic nominee is a sellout corporatist squish who will not bring about real change. The Libertarians will nominate someone touting limited government in the abstract, and some anti-Trump Republicans might drift in that direction. (Again, why would anti-Trump Republicans reward Kasich, one of the guys who played a key role in ensuring Trump won the nomination in 2016?)

So imagine a 2020 ballot that looks something like this:

It’s a lot easier for even a hobbled president with the advantages of incumbency to hold onto a plurality than a majority. Presume the Green and Libertarians amount to their usual 2 to 6 percent of the vote in most states. With Kasich and Hickenlooper running as an independent ticket, Trump and Pence just need to hold on to the largest slice of the remaining 95 percent or so, instead of needing close to half. The threshold of a win becomes the high 30s instead of close to 50 percent.

How confident should Democrats or the Kasich-Hickenlooper team be that they wouldn’t lose a bunch of 37-34-33 splits in key states? President Trump has had a really lousy run for a while, and his approval rating remains in the mid-to-upper 30s or low 40s. Assuming that’s his floor of support, that doesn’t look so bad in a three-way race. Let’s not forget: Donald Trump was wildly outspent, went through three campaign managers, had a lot of his party stay away from the national convention in Cleveland, outsourced his ground game to the Republican National Committee, kept having disastrous news cycle after another and faced the raging enmity of the national political press throughout the race. And he managed to win 304 electoral votes (with two faithless electors). Now give him the advantage of incumbency (a Rose Garden campaign, etcetera) and recall we’ve reelected four of the last five presidents.

It’s somewhat ironic that Kasich turned out to be the best friend Trump had in the primary, given all the constant whingeing he’s done about the president from the time the 2016 electoral process got started even to today. Unlike Scott Walker, who saw the writing on the wall and recognized the need to consolidate the GOP field in order to find a candidate who could beat Trump, and therefore pulled himself out of contention, Kasich never did get out until it was far too late – and by staying in the race he denied Ted Cruz the one-on-one fight with Trump and the opportunity to debate him one on one that Cruz was counting on. In that way Kasich was Trump’s best asset in 2016. Now, by spoiling for an independent run that would surely take more Democrat voters off the table than Republicans, Kasich would be aiding Trump again.

And by adding a purported centrist Democrat to his ticket – Hickenlooper is as liberal as the next guy, but he doesn’t fly his Antifa freak flag the way a Kamal Harris or Liz Warren does – Kasich would be opening the door for the Democrat Party to split, with its more rational voters giving up on it. That’s why the Democrats’ establishment crowd are terrified of this.

The piece does discuss the possibility of Kasich primarying Trump. Does anybody really believe Republican primary voters will jettison a sitting president for John Kasich? That’s so outlandish as to be comedic; if Trump is as damaged as he would need to be in order for Kasich to beat him, there would undoubtedly be somebody more respected within the party also running – whether a Ben Sasse, a Rand Paul, perhaps Cruz again, possibly Marco Rubio – with a better chance of winning. And if Kasich were to stay in the race under those circumstances, guess what the effect of that would be? It would be to deny the better Trump opponent an opportunity to consolidate anti-Trump votes, and therefore to insure Trump’s re-nomination.

You’d almost wonder if there isn’t money under the table somewhere keeping Kasich around. He’s the best thing Trump has going.