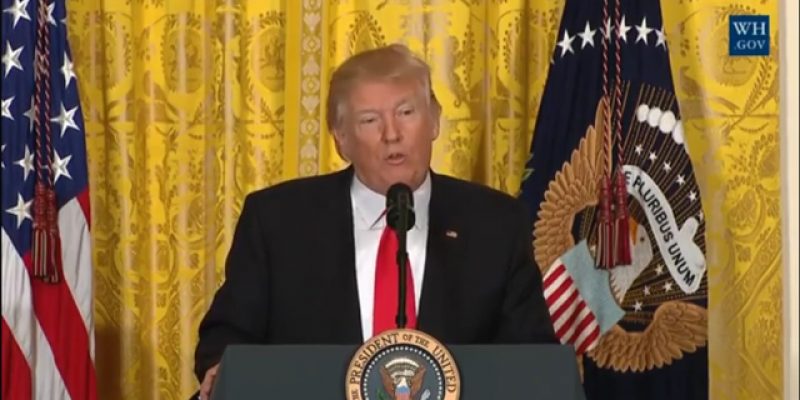 It’s not that President Trump has done anything affirmatively wrong leading to today’s mega-leak of a transcript of his phone call with the Mexican president, but what we’re talking about here is a sin of omission.

First, let’s identify the subject of the mess at hand…

A day before Attorney General Jeff Sessions is set to discuss a new leak crackdown, the transcripts of two heated January phone calls President Trump held with foreign leaders spilled into the headlines.

The Washington Post reported, based on those leaked documents, that Trump pressured Mexican President Enrique Peña Nieto on Jan. 27 to stop publicly saying his government would not pay for a border wall. The report also aired new details over the president’s infamously tense phone call the next day with Australian Prime Minister Malcolm Turnbull.

Both phone calls were widely reported in February, in one of the first major leaks out of the Trump administration that have since become a constant headache. But the Post claimed Thursday to have obtained the full transcripts, which reportedly were “produced by White House staff” and based on records kept by White House note-takers.

The transcripts are embarrassing, at least somewhat, because in it Trump talks about the political bind his campaign statement about how the Mexicans will pay for the wall has put him in. His statement about how awful it is to have to take the 2,000 jihadists from Australian detention centers that Barack Obama agreed to really doesn’t put him in a bad light at all with most of the American people.

But what’s unacceptable is the leak in the first place. The president of the United States is entitled to the presumption that things he says on private phone calls with foreign leaders will stay private.

He isn’t getting the substance of that presumption, which is terribly unjust, because of something he neglected to do – which is to fire everybody left over from the Obama administration that he could as soon as he took office.

The reason this wasn’t done was that to do so would mean lots of government agencies and the White House staff would be all but shut down without high and mid-level bureaucrats around to do the work. That’s not an invalid concern, but it’s a secondary concern. The reason Trump was elected was to “drain the swamp,” meaning to upend the comfortable statists in federal government and therefore bring about the transformational reform Washington desperately needs.

You simply can’t get that if you leave those people in place, particularly when you have Obama leftovers sitting in Washington and trying to run a stealth government with monsters like Ben Rhodes pulling pins on hand grenades and throwing them at Trump every day.

He’s had leaks coming out of the Executive Branch designed to destroy his credibility and render him ineffective every single day he’s been in office. And while Attorney General Jeff Sessions is actively investigating these leaks and it’s a certain thing someone will be put in a federal prison as an example intended to stop them, that’s only putting a bandage on the wound rather than preventing it from being suffered.

The prevention comes in firing everyone. Everyone.

Trump is six months late in cleaning out the federal bureaucracy and getting the Obama statists out. And if there’s progress in this regard we haven’t seen it – to the contrary, Trump’s national security advisor H.R. McMasters is actively purging Trump’s people from his staff and pushing a pro-Muslim Brotherhood foreign policy.

If one downside of being an iconoclastic political figure is that you struggle to find enough capable, qualified folks who’ll be loyal to you, we can sympathize with that. That’s a burden you carry. But it’s not an excuse to carry traitors in your midst who are doing everything they can to destroy you.

Interested in more national news? We've got you covered! See More National News
Previous Article Broome’s Office Says Most Of The BRAVE Contracts Are Not BRAVE Contracts
Next Article John Kennedy Wades Into The BRAVE Mess