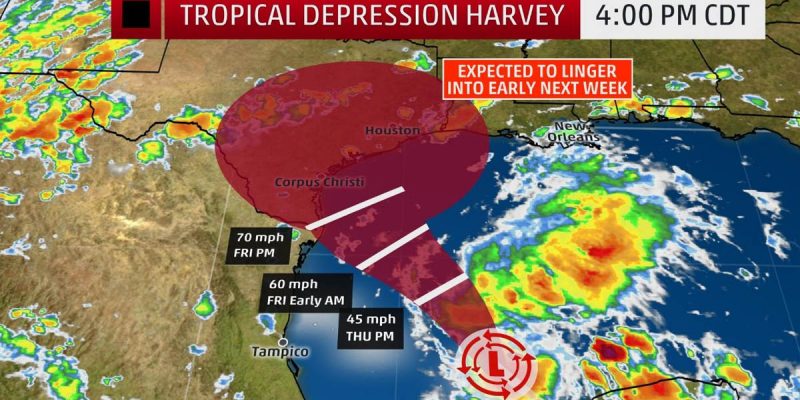 What’s unfortunate, if you’re a connoisseur of irony, is that it’s the “H” storm which appears to be poised to dump a large torrent of rain on New Orleans next week when Harvey makes its expected path east along the Gulf Coast from its landfall west of Houston, rather than the “L” on this year’s tropical storm chart.

That’s because the “L” storm this year is Lee, and after New Orleans’ mayor wasted two years of attention and better than a million dollars of taxpayer money on bowdlerizing historical monuments in his jurisdiction while overseeing a thoroughly corrupt and ruined Sewerage & Water Board, ignoring the explosion of violent crime infecting the city and practicing as much of a smash-and-grab operation to enrich his family and cronies as possible before his term in office finally, mercifully comes to an end.

Harvey is sitting near the southern end of the Gulf of Mexico now, but its forecast track has it making a northwest swing over the next few days, with a projected landfall somewhere between Brownsville and Corpus Christi in Texas – possibly as a Category 1 hurricane.

What’s expected is that the storm will bring a colossal amount of rain to the Texas coast, and then turn east and swing into Louisiana – meaning it will be a large-scale rain event in the southern part of the Sportsman’s Paradise. If the models which have it making a due east swing after its Texas landfall are correct, that rain will extend into New Orleans and pound the city with considerably more water than Landrieu’s busted drainage system can handle.

And New Orleans will flood for the second time in a month. If the Harvey scenario plays out as a worst-case.

New Orleans has suffered enough, one would have to conclude, from its poor political choices. Seven years into Landrieu’s time in office Gambit Weekly, which has been awfully friendly to the mayor, is now posting articles asking if the city is even worth it anymore. Its government isn’t capable of draining the city when there’s a hard rain, despite some $2.1 billion spent since Katrina on upgrading the pumping and drainage system. The Sewerage & Water Board is as understaffed as the police are, with dangerously poor morale for both.

Landrieu says he’s going to fix the problem by bringing in a third party to examine and study the Sewerage & Water Board. But that third party, Hayride sources tell us, isn’t exactly neutral or independent. That would be the Water Institute of the Gulf, which has this atop the “About” section on its website…

Founded in late 2011 through a collaborative effort involving the State of Louisiana, Senator Mary Landrieu, and the Baton Rouge Area Foundation (BRAF), the Institute connects academic, public, and private research providers and conducts applied research to serve communities and industry. In 2014, the Institute was selected as the Resources and Ecosystem Sustainability, Tourism Opportunities, and Revived Economy of the Gulf Coast (RESTORE) Act Center of Excellence for Louisiana. In all endeavors, our goal is to increase understanding of natural and human aspects of deltaic, coastal, and water systems; to develop tools that apply knowledge to restore coasts and ecosystems; and to reduce risk for people and infrastructure.

It’s not that the Water Institute doesn’t do good work, it’s that this is a Mary Landrieu creation. On its board sits Kevin Reilly, a major Mitch Landrieu donor. The public might be excused for expecting whatever might come from such an audit is likely to be a whitewash of the mayor’s role in the destruction of the Sewerage & Water Board.

And then there’s the new management team Landrieu is bringing in. It includes the admittedly perfectly-named Paul Rainwater, the former Jindal administration CEO who might literally have been born to supervise a public drainage agency, but also these others…

Other members of the team are:

— Terrence Ginn, a Baton Rouge-based deputy commissioner for finance & administration with the Louisiana Board of Regents.

— Renee Lapeyrolerie, a public relations and communications expert who now works at the engineering firm, CDM Smith, in addition to serving as a board member of Louisiana Stadium and Exposition District.

— Ehab Meselhe, an academic and engineer who now serves as Vice President for Science and Engineering at the Water Institute of the Gulf.

— Owen Monconduit, a retired Brigadier General from the Louisiana National Guard, who will provide engineering, contracting and procurement support for the emergency repairs.

— Robert “Bob” Turner, who serves as director of Engineering and Operations at the Southeast Louisiana Flood Protection Authority-East. He is a civil engineer with more than 35 years of experience.

Renee Lapeyrolerie is a former press secretary for the Louisiana Democrat Party. It’s like Landrieu’s Interim Emergency Management Team is a Soviet submarine – it can’t sail without a political officer on board.

We’re not hoping New Orleans floods if Harvey comes through. The people of that city have been through enough already. But if it should happen, at least the glaring, blatant, insultingly-obvious inadequacies of the incompetent bungler in charge of the place can finally be laid bare once and for all. It wouldn’t be much of a silver lining, but on the other hand it is long past time that this clownish, preposterous bully have his political career submerged under the waves.

Interested in more news from Louisiana? We've got you covered! See More Louisiana News
Previous Article WAGUESPACK: Time To Get Specific On Fiscal Policy
Next Article Kip Holden Is Explaining Why We Don’t Want Him Back As Baton Rouge’s Mayor