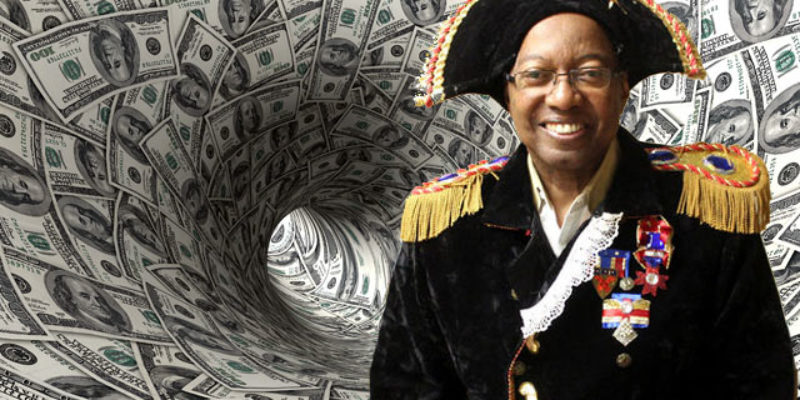 Don’t get me wrong – there is no question that Louisiana’s capitol city has undergone a decline in its leadership this year, as a below-average mayor has been traded in for one beyond help. You’d never want to descend from Kip Holden to Sharon Weston Broome; that kind of devolution is what can produce a Baltimore or Jackson in a shockingly short period of time.

But it’s starting to become obvious that Holden is spoiling for his old job back, and that’s not a good development for Baton Rouge.

Holden is violating the unwritten rule that the former holder of an office keeps quiet about the issues affecting the current holder of that office, and he’s doing it in such an outspoken fashion as to become a little bit obnoxious. Not that Broome’s performance on the job so far should put her beyond criticism; she’s a disaster. But it’s a bad look for the old mayor to snipe at the new mayor.

First, there was the retirement of former police chief Carl Dabadie – and Broome’s efforts to bring that about by hammering away at Dabadie throughout the initial months of her time in office. Holden publicly blasted Broome for those efforts, telling the Baton Rouge Advocate after Dabadie retired that “She made a decision on a good man, a good person, a good law enforcement officer, and it will come back to haunt her.”

It’s not that Holden is wrong. So far there is zero evidence that Broome’s permanent hire for police chief in Baton Rouge will be a good one. It’s even possible that interim chief Jonny Dunham may hold on to the job because she doesn’t make a hire at all – which many inside BRPD will quietly tell you is the best of all the likely scenarios at hand.

But having the former mayor rip the current mayor for forcing Dabadie out is about as destructive an occurrence as you can have for the prospect of hiring a replacement. Nobody wants to work for a loser, and Holden is making Broome look like one by questioning that decision. After all, Holden fired a police chief, too, and nobody was sniping at him from the sidelines when he did so.

But then there was more. We then had the BRAVE controversy, where Broome essentially looted a program aimed at fighting violent crime using detailed crime data supplied by LSU to surge police into gang-infested areas and stage interventions with gang members to steer them away from criminal behavior. The program was set to lose its federal funding in no small part because of poor recordkeeping by Holden’s administration, so Broome more or less decided to take the money that was left before BRAVE ended and drop it from helicopters on her political pals.

And when the current mayor tried to defend herself from the scandal that ensued when one of those vendors, Arthur “Silky Slim” Reed, who had a contract to teach kids respect for the police, went in front of the Metro Council and said that domestic terrorist and cop-killer Gavin Long brought “justice” when he shot six local law enforcement officers and killed three, by noting that Holden had set the program on a path to oblivion, Holden shot back with both barrels. He suggested that the FBI and US Attorney get involved and start prosecuting people for what Broome was doing with the program.

Again, Holden isn’t wrong. While there had always been an element of “community programming” involved in the BRAVE program – having vendors participate in it to show at-risk kids there was something else to life but to be a gang-banger is an essential piece to the interventions the program called for, Broome’s sin was to have canceled a contract with LSU to provide the crime data underlying the program, which turned BRAVE from a pretty well-conceived crimefighting effort to little more than a patronage factory masquerading as one. The crime rates in the neighborhoods targeted by BRAVE skyrocketed this year, which shows that what Broome did with the program doesn’t work.

And on this score we can give him a break, since Broome dragged him into the controversy by blaming him for the federal matching funds going away. But once again, Holden was still hanging around.

This week, though, it has started to become obvious Holden has more than just rabbit ears about criticism of his tenure in office.

At issue currently is an application for some $170 million in federal funds to pay for a tram along Nicholson Drive between LSU and downtown Baton Rouge, something that was Holden’s pride and joy but that Broome has abandoned. The latest installment of those funds, some $67.5 million, was deferred to next year by Broome, who says she isn’t pulling the plug on the project. That set Holden off on a public tirade which looked for all the world like an early announcement he was running for his old job in 2020.

“When federal money is available, are we so arrogant that we would choose to leave that money on the table, and say, ‘I may go back next year and apply for it then?’” Holden told the Baton Rouge Business Report. “That’s not how Congress works. That money may not be available next year.”

There are two things here. The first is the obvious, which is that Kip Holden isn’t the mayor of Baton Rouge anymore and Sharon Weston Broome is. If Sharon Weston Broome doesn’t think the tram is a priority, and if there isn’t a groundswell of public demand for it, then it’s inappropriate for Holden to run to the media to trash her for that decision. As mayor, he didn’t have his predecessor Bobby Simpson trashing him at every turn for decisions that were his to make; it’s more than a little arrogant for him to assume the right to act as Broome’s judge.

The other thing is he’s wrong about the tram.

There is no glaring need for a $170 million mass transit line between LSU and downtown. The city’s bus system didn’t find any particular ridership to be found along that route, and if demand won’t fill up a bus which costs considerably less to operate than a tram, then spending $170 million on a tram is completely unwarranted.

And no, the calculus doesn’t change if the $170 million turns out to be federal funds. Louisiana’s politicians have a real penchant for making stupid decisions based on the availability of federal bait money, and this is a prime example. Let’s say that $170 million would materialize and a tram gets built. Everybody knows nobody would ride the tram, because there isn’t much of anything between downtown and LSU and Nicholson Drive is a perfectly functional road connecting the two (so is Highland Road just to the east, by the way, and to a lesser extent that’s also true of River Road to the west). Traffic on Nicholson Drive between LSU and downtown is really not all that oppressive, other than perhaps on the days of LSU football games, and moreover Baton Rouge has not only Uber but Lyft as well as ridesharing companies servicing people who need rides along that corridor.

All of which means that sure, you can take Uncle Sam’s money and hire contractors to build the tram line, and perhaps that $170 million might make a small dent in the local economy for a time. But then once the tram is built, somebody has to pay to operate the thing. And since there is no demand for it, you can be guaranteed it won’t be ridership that pays the bills. No, those operating costs will get covered by taxpayer dollars – at least, until somebody steps up and admits it was a mistake to build the tram and pulls the plug.

Kip Holden never understood this. He collected as much swag for the city-parish government in Baton Rouge as he could, never caring whether any of it was a good idea. While he was mayor the city-parish budget doubled, and there was always a new tax on the ballot to support things Baton Rouge really didn’t need – usually at the expense of things it did need.

And when even somebody as dense as Sharon Weston Broome comes along and recognizes his tram as a boondoggle, Holden uses that as an opportunity to call her out.

The obvious answer here is “none of the above.” Broome is terrible and needs to be a one-term mayor. But the leader who can halt the city’s decline is not the old one who put Baton Rouge on this course in the first place, and his serial sniping is a good indication of it.

Interested in more national news? We've got you covered! See More National News
Previous Article New Orleans Might Not Deserve Tropical Storm Harvey, But Mitch Landrieu Sure Does
Next Article VIDEO: Tucker Carlson And Mark Steyn Yuk It Up Over Hillary’s New Book