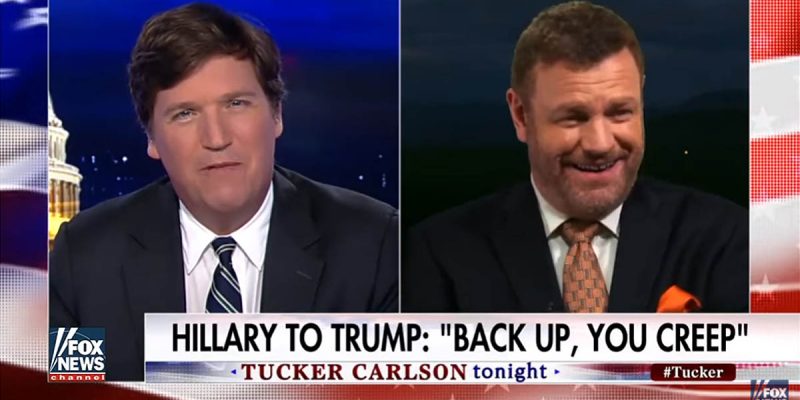 Last night on Tucker Carlson’s show, there was Mark Steyn – who’s having a busy week, as he guest-hosted Rush Limbaugh’s show yesterday as well – to discuss recently-released excerpts of Hillary Clinton’s book What Happened, which will be out next month.

Clinton’s memoir of the 2016 election, which is the third memoir book she has put out – it’s the height of vanity for someone to publish three different memoirs, is it not? – isn’t destined for particularly good sales. Clinton is, after all, one of the least likable political figures in American history, and one key reason for her lack of charisma is her stunningly underdeveloped sense of candor. Almost literally none of her utterances betray any sense of sincerity or humanity, and almost everyone within range recognizes that fact. That’s why Clinton had to steal the Democratic nomination away from the socialist monster and electoral cripple Bernie Sanders with a rigged nomination process, and it’s why she lost to Barack Obama for that nomination in 2008. Her husband Bill managed to get away with a torrent of lies even larger than Hillary’s, and be elected president twice, but Bill at least had a little bit of humility to offer – even though his humility was as fake as his sincerity was. He was just better at the grift.

So What Happened is destined for the bookstore discount pile, if not the landfill, but in the meantime it’ll get its publicity tour. And that has begun with an excerpt in which Clinton is recounting her revulsion at being so close to Donald Trump in the second presidential debate. She says her skin crawled during the experience, which is a patently dishonest statement – after all, wasn’t Hillary on hand for Trump’s wedding to Melania a few years back taking pictures with the man she now calls a “creep?” Trump, when hit over those pictures during the Republican primary, said he’d basically bribed Hillary to be there – which isn’t a particularly good look for him, but it certainly doesn’t lend much to Hillary’s representations, does it?

In any event, neither Carlson nor Steyn have much use for these revelations in a very entertaining segment – the best piece of which comes when Steyn says he thought Hillary was talking about her first date with Bill, not the presidential debate.

Interested in more national news? We've got you covered! See More National News
Previous Article Kip Holden Is Explaining Why We Don’t Want Him Back As Baton Rouge’s Mayor
Next Article What Will The Confederate Monuments Debate Look Like In 500 Years?