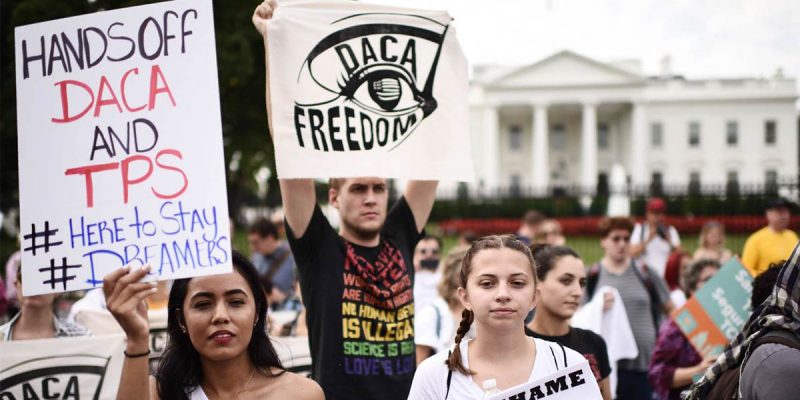 I’m not going to make a long post out of this, because frankly the whole debate over DACA is rather boring. We’re talking about an executive order that was illegally made, that has been panned by the courts and that has not been sanctified by Congressional action. It’s not law. So this week the Trump administration “rescinds” it, which is nothing more than a recognition that DACA is not law, and Washington is now on fire over such a “reckless” action.

This is a manufactured controversy. Everyone knows there will be some sort of congressional action put in place to keep illegal aliens brought here as small children by their illegal alien parents from being deported en masse. Most of these people aren’t problematic as permanent residents or even potential citizens, though it seems they do struggle mightily to find spokespeople for their cause who aren’t grossly obnoxious (a perfect example is the illegal Filipino filmmaker Jose Antonio Vargas, whose entitlement and nonstop accusations of racism were tiresome in 2014 and are unspeakably irritating now). There will be a bill to provide something for the DACA crowd.

So for President Trump to “rescind” DACA is for Trump to open the bidding to create that congressional deal.

The entire Democrat Party wants some form of DACA – when they attempted to pass an actual law they called it the DREAM Act – and a good chunk of the Republican Party wants it as well. There is a deal to be had.

The question is, what will the Democrats offer in pursuit of that deal?

We ask this question because the Obama era of simply forcing the Left’s policy agenda down the throats of the American people is over. The country tried to end it in 2010 when it gave Republicans control of the House, and that didn’t work overly well. The country then gave the Republicans control of the Senate in 2014, and still the Democrats attempted to force that agenda down our throats by use of illegal executive actions like DACA.

Well, now the Democrats don’t control much of anything, other than a rejectionist minority in the Senate they’re using to filibuster legislation and hold up executive and judicial branch nominations and a chunk of the federal bench abusing its power in an attempt to stop legal presidential action. So far they’ve shown themselves fairly capable of interfering with Trump’s agenda – they managed, with the help of a few Republican political bottom-feeders, to stop an Obamacare repeal for now and it looks like they’ll manage to kill whatever tax reform plan Trump attempts to get passed.

But with DACA, Trump has the power to upend the status quo and force the Democrats to participate in making law rather than obstructing the legislative process – and, smartly, he has used that power.

So the Democrats, if they want to enact some sort of amnesty for the DREAMers, are going to have to sit down at the table.

Ask them what they’re willing to trade. The answers you get might be instructive, because they aren’t used to bargaining in good faith.

Interested in more national news? We've got you covered! See More National News
Previous Article Can We Get The World’s Smallest Violin To Play For Hillary?
Next Article Looks Like Dee Richard Is Having A Bad Day