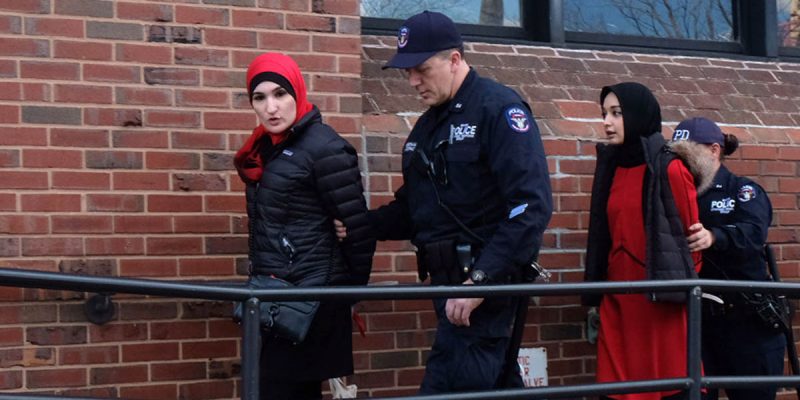 Our readers may not know much about Linda Sarsour, the Palestinian-American sharia advocate who seems to turn up everywhere there is bad behavior by the Hard Left in America these days, and we’d prefer not to give her any more publicity than we have to, but something she’s doing this week simply can’t be ignored – it’s that bad.

Big Labor is looking to exploit the devastation of Hurricane Harvey to raise money for its organizing efforts in Texas.

The Texas Organizing Project Education Fund, a labor-affiliated group looking to make inroads in right-to-work Texas, launched the Hurricane Harvey Community Relief Fund in the wake of the flooding that has devastated the Houston area. The donation page says the fund will “move the material aid the most vulnerable hit by Harvey,” but that “material” goes beyond standard humanitarian aid. Donations, the page says, will help the SEIU-funded group organize workers.

“Your donation is vital to ensuring that we have the resources we need to organize and fight for Texans devastated by Hurricane Harvey,” the page says.

The relief fund is sponsored by a number of prominent liberal advocacy groups and politically influential unions: the SEIU; Communication Workers of America; Faith in Texas, a group that fights for “economic and racial justice”; Texas RioGrande Legal Aid; Texas Housers, an affordable housing advocate; and the labor-affiliated Workers Defense Project. While the group says it will meet the “first response” needs of residents, it plans to use the fund to advance its organizing agenda.

“Together we will organize and advocate for our devastated communities, shining a spotlight on inequalities that emerge in the restoration of lives, livelihoods, and homes, amplifying the needs of hard-hit communities, and providing legal assistance for residents wrongfully denied government support,” the page says.

But the face of this effort appears to be none other than Sarsour, whose across-the-board left-wing advocacy has been nothing short of bizarre – here’s somebody who calls herself a feminist while at the same time she wears a Muslim headscarf and advocates sharia law, she once raised $80,000 to support the “victim” of an anti-Muslim hate crime that never actually happened, and she shows up at left-wing demonstrations for topics as varied as the women’s march in DC and the Colin Kaepernick pep rally in front of NFL headquarters.

The reaction to this has been fairly sharp, as it should be…

This isn't hurricane relief. It's a political fund. But what do you expect from this terrorist sympathizer?

Grifting money away from hurricane victims is about as low as someone can get. @Twitter needs to step in.

This is a political PAC not #Harvey relief. You're literally stealing money from these people.

Please don't give @lsarsour any money. It will never make it to a charity. Ever. #lindasarsour #charity #fraud pic.twitter.com/D5CzI85lNG

Breitbart notes that this isn’t just structured to support political advocacy rather than hurricane relief, but that Sarsour herself has a record of raising money under fraudulent circumstances…

This is not the first time that Sarsour has been connected with charities. In March, Sarsour partnered with Tarek El-Messidi, founder of the Celebrate Mercy nonprofit, to launch a crowdfunding effort for Muslims to help fix vandalized Jewish cemeteries.

However, despite a total of $162,468 being raised, only $50,000 of the money went to toward Jewish cemeteries in St. Louis, Chicago, and Rochester, while the rest of the money remains unaccounted for.

It’s not exactly a surprise that this would happen, but it is an outrage.

By now it’s a cliche’ that conservatives give more money to charity than liberals do, but most cliches get that way because they’re true. Linda Sarsour doesn’t have a charitable bone in her body, and she’s never worked a real job in her life. If you think she gives a damn about Harvey victims other than what they can do for her and the fraudulent organizations she works with, you aren’t paying attention.