Anarchists and racists are nested in New Orleans. Two posters and an email produced from a records request to Mitch Landrieu show the extreme attitudes of the allies of Mitch – and in particular, the Take Em Down NOLA gang – in destroying New Orleans history.

The first flyer is for “Sites of Resistance” and features pictures from the integration era in New Orleans, but it also shows a sign supporting the removal of the Andrew Jackson monument in Jackson Square.  These “Sites of Resistance” appear to go on from September through April at the Small Center which is part of Tulane University’s School of Architecture. Also depicted is a sign calling for the boycott of shopping on Canal Street.  It’s scary that any department or facility of Tulane would support a group or movement like this. 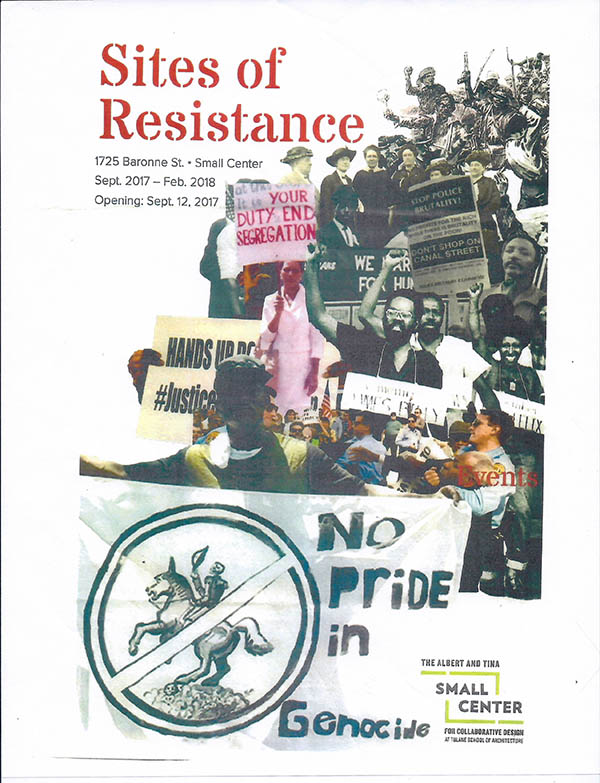 The second flyer calls for changing the name of the now famous Treme neighborhood. Claude Treme is cited on the flyer for seizing slaves belonging to another man, but also for murdering a slave.  The “Rename Treme” flyer uses historic images, derogatory as they appear primate like, from the Times Picayune used to depict runaway slaves and slaves for sale.  This is interesting because the anti-monument racists have mainly attacked white historical figures, which Claude Treme still is, but this means people want the prominent neighborhood renamed so black people in Treme aren’t forced to live in a neighborhood whose name reveres a slave murderer and slave owner. 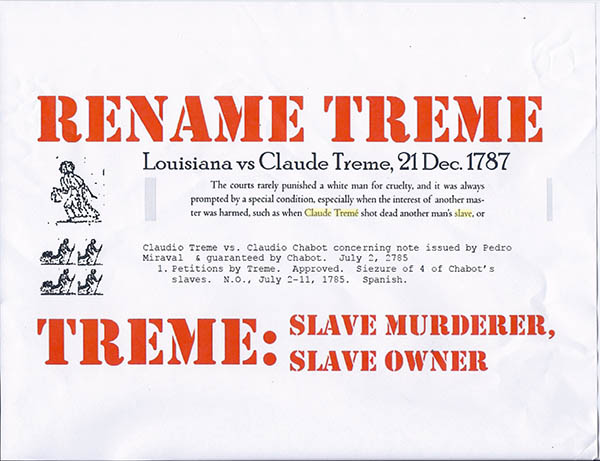 For New Orleanians to object to Robert E. Lee but give Treme a pass is grossly inconsistent. The response to this will be intriguing.

The last evidence demonstrates the racial hatred that consumes Malcolm Suber, a failed City Council candidate, Marxist, and leader of Take Em Down NOLA. The day before Mitch removed Robert E. Lee from Lee Circle, Suber emailed Mitch more plans to carry out. It’s so insane it needs to be printed in full:

The next things to do are below:

Can be accomplished through City Council – no vote is needed.
— Malcolm Suber

These flyers are a glimpse into what came out of Pandora’s Box after Mitch opened it. These are two that were sent to The Hayride. Others likely exist. The Suber email to Landrieu shows how ugly of a racist he is. His Take Em Down NOLA comrades are, at minimum, guilty by association.

The mayoral candidates addressed monuments at the forum earlier this week, but they are ignoring discussion on the extremists who have protested and rioted in the city since last November.

The creators and followers of these ideologies have a sickness. Their candidate was defeated by Donald Trump last year, and they’ve been protesting, rioting, and destroying anything representing white men ever since. These children cannot cope with an outcome that doesn’t go their way. Trump predicted his supporters would win so much they’d get tired of winning and say, “Please, Mr. President stop! I can’t take all this winning!” Hillary is the perennial loser, her supporters lost and the only thing they share with Trump supporters is that while he joked about his supporters’ reaction, Hillary’s supporters too can’t take all of Trump’s winning.

And thus, they want pandemonium to reign.

Tax white people, punish white people, remove this, remove that. Now a beautiful, historic city is under siege by radicals from Take Em Down NOLA and others who infiltrated and want to disrupt the world by doing their part to shake up New Orleans.