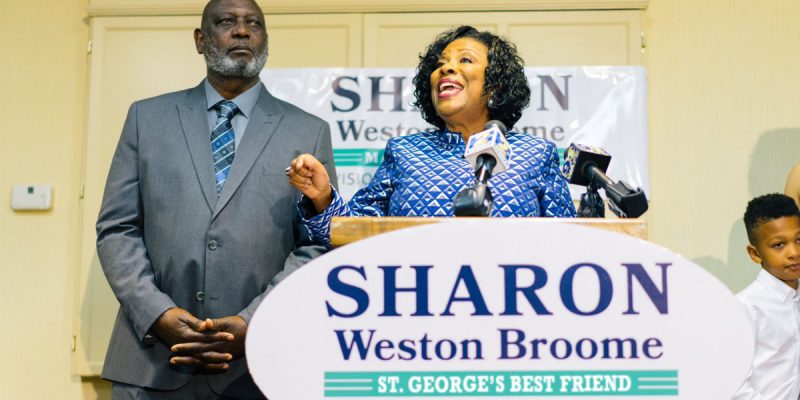 …and St. George hasn’t even happened yet.

We’re laughing like hell about this, because when the Business Report’s publisher Rolfe McCollister inexplicably endorsed Sharon Weston Broome for mayor-president of East Baton Rouge Parish over Bodi White – that was the city’s self-described business publication endorsing a Democrat state senator with a lifetime score of 32 according to the Louisiana Association of Business and Industry over her Republican colleague with a lifetime score of 73 – our reaction was that McCollister was endorsing the incorporation of St. George…

That was in December of 2016. Here it is September of 2017, and the Business Report’s Stephanie Riegel, after reciting a litany of stupidities emanating from Broome’s administration – the Council on Aging mess and her tacit support of Tasha Clark Amar, the Troy Bell fiasco, the looting of the BRAVE program, the inability to hire Bell’s replacement as Chief Administrative Officer without outside help, the Carl Dabadie kerfuffle – notes that the performance of this mayor is making St. George a certainty…

Just nine months after her narrow election, Broome has become as unpopular in parts of the parish as Barack Obama and Hillary Clinton rolled into one—not that the southeast Baton Rouge/St. George crowd was ever really with the mayor. But now, they’re resolutely against her, and the fact that the councilmembers who represent them wouldn’t even allow voters to decide for themselves about the tax proposal shows just how deep the sentiment runs.

Then there’s the fact that the city’s murder rate is at an all-time high, as are delays in the city’s permits office, and a general sense among those who deal with City Hall on a regular basis that no one over there really knows what they’re doing.

Are these criticisms justified?

That’s open for debate. But the problem for the administration is that this is what a growing number of the mayor’s critics are saying. You hear these complaints every day when you talk to people—particularly business people—in professional settings, social situations, and especially on social media. They’re fed up and frustrated, rightly or not, with an administration that they think does not represent the whole community, and isn’t capable of doing so even if it were so inclined.

All of which is playing directly into the hands of those preparing to again mount a campaign to incorporate an independent city of St. George after their narrow defeat in 2015. They’ve been laying low—in part because they were required by law to wait two years before trying again, and also because they wanted to give the new administration a chance.

Riegel says they’re going back at a St. George petition early next year. We’re not 100 percent sure that’s correct. In fact, we’ve heard there are now multiple groups considering incorporations, and instead of one St. George there could be two, or even three, new cities springing up in the unincorporated southern part of the parish, complete with rumors of millions of dollars in potential out-of-state funding. It might take months of discussions among various stakeholders to come to a cohesive plan for the future and properly plug in all the available resources, and perhaps it could be more like this time next year before an incorporation effort, or more than one, would begin.

And strategically it actually makes a lot more sense to wait, for two reasons. First, Broome’s performance as mayor isn’t going to get better. The fact that she can’t surround herself with high-powered employees doesn’t just come from a total lack of executive experience prior to her current job; it’s that she has no talent for leadership and no understanding of what doing a good job actually means. As a result, even the mediocre people she’s managed to bring with her are leaving the ship – for example, her #3 man Dr. James Gilmore, who was hung out to dry as the chief culprit in the BRAVE scandal, was on the radio in Baton Rouge yesterday essentially trashing Broome as a dolt. Things are only going to get worse, particularly when she does manage to hire a CAO and when she hires a police chief. There is no reason to believe either of those hires will go well, and in the meantime confidence in her leadership is only going to wane.

Which will mean everyone who can find a way out from under her incompetence will be scrambling to do so. For some people that will mean decamping for the surburban parishes ringing Baton Rouge. For others, it will mean signing a petition to incorporate St. George (or something else). Wait long enough, and business for that petition might be so brisk you’d struggle to find a St. George resident who won’t sign it.

But second, state law has it that when the petition has the required number of names and the incorporation is placed on the ballot, and the votes are in and the city is born, it’s the governor who appoints the mayor and city council of St. George. Right now that would mean John Bel Edwards would have it in his hands to establish the governing class of the new city. This is an eventuality which is fraught with bad possibilities, to say the least – Edwards could well appoint a bunch of trial lawyers and teacher union types to those positions (as a notable example, Broome’s transition team executive director and former Democrat secretary of state candidate Chris Tyson lives in Santa Maria, which is in what would be St. George), and were Edwards to put the right mix of aggressive Democrats in charge of the place they might well rush to encumber the new city with all manner of civic contracts and governing norms that would make St. George little different than Baton Rouge. Gone would be the dreams of a Louisiana equivalent to the libertarian paradise of Sandy Springs, Georgia; even once the Edwards appointments could be run off at the first city election cycle their effects would remain.

Therefore, if it’s not 2018 but 2019 when St. George is on the ballot, and 2020 before the nuts and bolts of the incorporation were to be assembled, that isn’t a bad thing assuming Edwards doesn’t win re-election.

So while Riegel’s column was wildly entertaining to us, and while we agree completely with her that Broome is the best salesperson St. George could ever have, she might not be right that St. George is imminent. The folks mad enough at Broome to start a new city might well strategize that their revenge against her quality of governance will be best served cold.