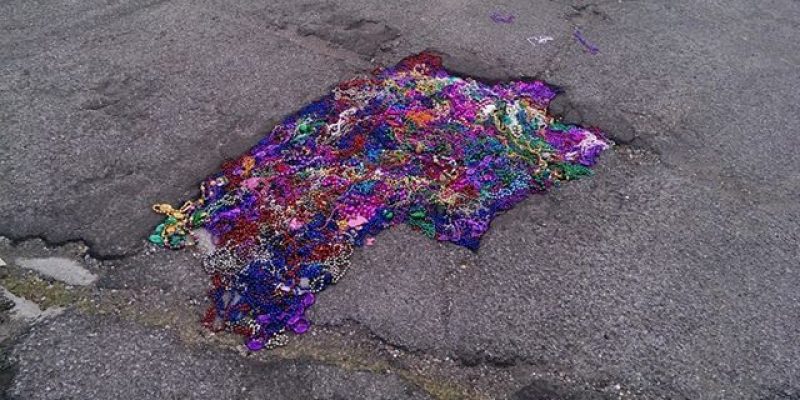 New Orleanians are famous for using any excuse for a party.  The phenomenon is so well known that even fictional depictions of New Orleans create their own faux traditions, like the notorious “gumbo party” from the mercifully short-lived “K-Ville” buddy-cop drama.  Some New Orleanians briefly imitated that bogus tradition anyway, because why not?  It’s what we do here.

It should thus come as little surprise that a pothole on Third Street in the Irish Channel, where residents had begun to add creative detritus in protest, became the focus of such a party:

It was among a select few potholes around the Irish Channel that locals have used as canvases to vent their frustration with the slow pace of infrastructure repairs. Their media have included a family of rubber ducks.

As word of their didactic display spread via social media, Third Street residents rode the momentum to organize a “Pothole Party” on Sept. 15. Parents, children and pets arrived with food and drink in tow, gathering in the divot as motorists curiously crawled past on the other side of the street.

Decorating potholes is another New Orleans tradition.  One pothole just off St. Charles Avenue was festooned with old Christmas trees back in 2013 (although they didn’t age very well).  At least when residents pile things into potholes, it alerts motorists to steer clear.  That’s more than the city normally does.

Likewise, those with longer memories will recall how the entire spectacle hearkened back to last year’s “Sinkhole de Mayo” Party at the site of a major sinkhole that opened up near the foot of Canal Street.  What better way to draw attention to the city’s continuing inability to deal effectively with infrastructure problems than to throw a party?  This is definitely becoming an ongoing tradition.

Of course, when local media reported on the Pothole Party, it finally shamed the Sewerage & Water Board into actually repaving the street.

On Monday, the next workday after the Times Picayune reported on the party, workers brought heavy machinery and surfacing materials to complete the fix started a couple of months ago.

One could almost call the workers party poopers, were it not for the fact that the work should have been completed weeks earlier. Oftentimes, it seems as though only public shame can spur basic infrastructure repairs in New Orleans.