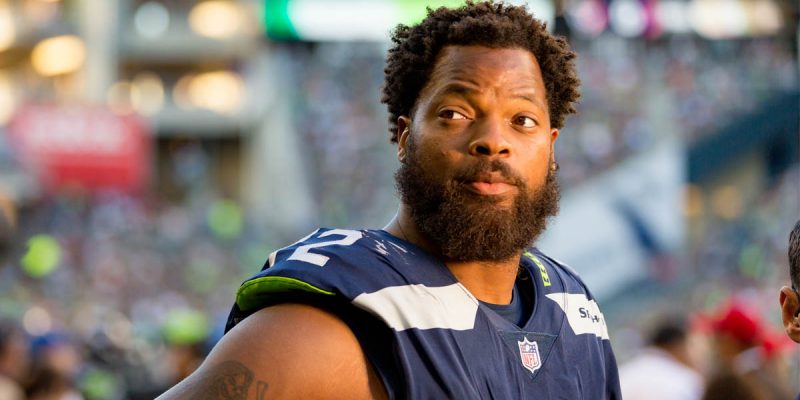 Two items of note this week show that the precipitous decline of the National Football League which began as a direct result of a few players refusing to stand for the National Anthem at games, and the intensely negative fan reaction to that spectacle, has not been halted. Given the state of the league’s leadership there isn’t much hope a viable solution to the NFL’s growing disconnect with its fans will be found in time to halt the decline, either.

This all began with Colin Kaepernick, of course. It should be remembered that at one time Kaepernick, who had put up amazing, video game-style numbers as a dual-threat quarterback at the University of Nevada, was busy establishing himself as a rising star in the NFL. He displaced a quite good quarterback in Alex Smith as the starter for the San Francisco 49ers and even took his team to the Super Bowl. But Kaepernick got mixed up with an absolutely toxic anti-American woman in Nessa Diab, a radio DJ and YouTube personality in San Francisco who had briefly dated Kaepernick’s teammate Aldon Smith. Diab set her hooks in Kaepernick, and filled his head with a whole bunch of social justice and race-grievance bullshit, including, apparently, a closet conversion to Islam.

And it didn’t take very long before Kaepernick began regurgitating leftist agitprop in interviews and on Twitter – and predictably, his performance on the field took a dive for lack of focus. Then, last year, after Kaepernick lost his job to Blaine Gabbert in the preseason, he started kneeling for the national anthem. A few other players followed.

Fan reaction to this show of disrespect was immediate and pronounced, as the NFL saw a double-digit TV ratings decline that surveys showed was directly attributable to the politicization of the sidelines. And after the 49ers finished in last place in the NFC West, Kaepernick was let go. No other team in the league would have him, which is obvious and understandable – he’s allowed himself to become toxic to at least half the paying customers for any team in the NFL, and his interest is clearly in his girlfriend and her leftist politics and NOT his craft. There is zero reason why an employer such as what Kaepernick would seek should want to inject him and the distractions he offers into their locker room when he’s no longer a starting quarterback in the NFL.

And yet the NFL’s league office has remained quiet on the subject while networks like ESPN have stirred resentment and controversy over Kaepernick’s loss of marketability, making a bad quarterback cut from a bad team into some sort of martyr. The league’s alumni – and specifically its black alumni – have been screaming that Kaepernick is a cancer and ought to be denounced, and yet NFL commissioner Roger Goodell has restricted his statements to pabulum about the right to free expression.

And in the meantime there is a continued smattering of players who refuse to stand for the national anthem, picking at the scab of last year’s public relations disaster. Some 12 Cleveland Browns players refused to stand for a preseason game earlier this year, and only relented for the next week after the team’s legendary star of the 1950’s and 1960’s Jim Brown spoke up in opposition to what they were doing. Then there was Seattle Seahawks defensive end Michael Bennett, who we’ll get to in a moment. Then last night it was the Kansas City Chiefs’ Marcus Peters, who sat on the bench rather than standing for the national anthem during last night’s 42-27 pasting of the New England Patriots.

Back to Bennett: he lit off a separate firestorm this week by releasing a statement on Twitter accusing the Las Vegas Police Department of racism for having apprehended him and forcing him to lay on his stomach in handcuffs simply because he was black. Bennett was at a club in a Las Vegas casino after the Mayweather-McGregor fight last month when reports of a shooting occurred, and the police were called to investigate what was billed as an active shooter situation. The club and casino were filled with black people attempting to flee the chaos, which is important since Bennett alleged he was arrested because he was black.

But in answer to Bennett’s charges, the LVPD offered a rather devastating response. It seems that Bennett was hiding behind a bank of slot machines, which was certainly reasonable given that everyone thought there was an active shooter in the building – but when he saw the police he fled from them, and then scaled a wall outside the casino as he was being chased. LVPD offered some 120 different video angles of the entire proceeding and thoroughly refuted Bennett’s story, and in particular his accusations that a gun was pointed to his head and one of the policemen threatened to kill him.

It turns out the two cops who apprehended him weren’t racist white guys but rather Mexican-Americans. And when the police were satisfied Bennett had nothing to do with the shooting they let him go.

This is why Bennett wouldn’t stand for the national anthem. He was defending a lie he’d told publicly.

A couple of thoughts on these developments, which are completely toxic and will, if they’re not put to a halt, kill the NFL as a marketable institution.

First of all, Goodell is to blame for this national anthem business. Last year when the refusal to stand became an issue to begin with Goodell should have put out a league-wide directive that the national anthem would be played BEFORE the players were brought onto the field, and in so doing the NFL would remove the source of the controversy and make it impossible for lousy people under its employ to destroy the league’s brand with the predominantly middle-class and patriotic people who comprise its customer base. And while team owners could police their players, it’s much better for the NFL to do it because by the league doing so there are no competitive consequences – the Chiefs aren’t going to want to cut Peters, one of the league’s best cornerbacks, for being an anti-American asshole on the sidelines even though some of their fans might want to see it happen, but if the NFL comes in and removes Peters’ ability to show his character while the Star-Spangled Banner is playing, it’s no longer an issue.

That’s an incredibly simple solution, and it’s one that shows the NFL is intelligent enough to keep its product from becoming offensive to its customers. People watch the NFL to get away from politics and grievance, and the insistence by the Kaepernicks, Bennetts and Peterses that those things pollute the game will dry up revenues very quickly. It should have been done away with last year; now, so much damage has been done that many football fans will get their fix watching college ball on Saturdays and take up fly fishing or home improvement on Sundays. Once they’re lost, who knows when they’ll be back.

And a second thought – where are these players coming from? They’re coming from American colleges. What else is coming from American colleges? The same social justice/safe space/entitled snowflake movement that drives the virulent anti-Americanism of Antifa and Black Lives Matter. Kaepernick might have completely lost his mind due to his idiot girlfriend, but there is little reason to think he hadn’t already marinated in the toxic politics he now espouses while in college.

This business is of a piece with the abject failure of American higher education to produce real-world-ready college graduates in all kinds of fields. Corporate America has been rocked in recent years with crazy stories of unreasonable and childish demands being made by entitled low-level young employees, and it’s now a trope that college graduates with thoroughly unmarketable degrees are populating their parents’ basements and childhood bedrooms while they work part-time with no hope of ever clearing the six-figure student loan debt they racked up studying Derrida and Marx. Why would anyone think the NFL is immune from such problems? Particularly when the kids being drafted into the league sought out majors like sociology, criminal justice and ____ Studies – all of which are replete with crip courses taught by addlebrained leftist professors who could never survive in the real world.

College football fans are subsidizing the left-wing indoctrination of athletes in universities run by radicals. It should be no surprise that the result is indoctrinated, radicalized athletes in the NFL who are poisoning the league’s brand by politicizing it.