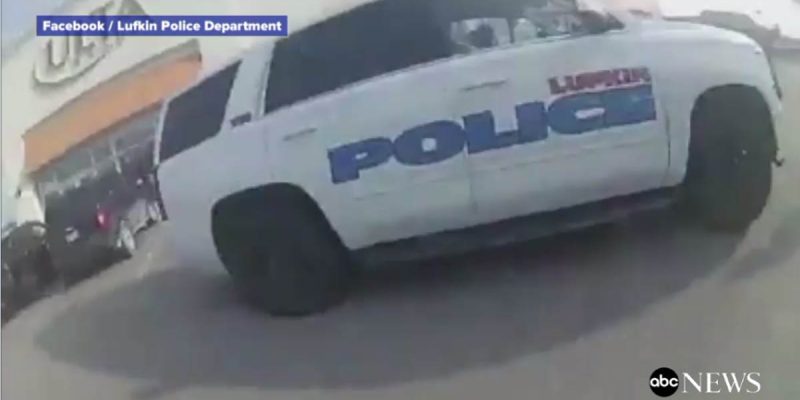 We’ll give this a short setup and then let it roll, because it’s one of the more improbable things you’ll see this week. As it happens, 33-year old Toscha Sponsler was apprehended attempting to shoplift from an Ulta beauty store across the highway from the Lufkin Mall in Lufkin, Texas, which is in the eastern part of the state about halfway between Houston and Shreveport. Police were called and she was handcuffed and put in the back of a Lufkin Police Department SUV.

Sponsler wasn’t your average shoplifter, though. Not long after she was buckled in with her hands cuffed behind her back, she unbuckled the seatbelt, slipped out of her cuffs, climbed over the window partition into the driver’s seat and hit the gas on the SUV.

That led to a 23-minute car chase at speeds up to 100 mph, before Sponsler was finally caught in Zavalla, Texas, which is two towns southeast down U.S. 69 from Lufkin. It looks a little like Sponsler might have been attempting to flee to the Louisiana state line, but she didn’t make it.

Instead, she’s in stir at the Angelina County Jail, on $18,000 bond and charged with escape causing serious bodily injury/threat of a deadly weapon, aggravated assault against a public servant, possession of a controlled substance, evading arrest with a vehicle with a previous conviction and unauthorized use of a vehicle. She has a court-appointed attorney and had not yet entered a plea as of Wednesday, according to the Angelina County District Attorney’s Office.

But somebody ought to pay her something for the movie-worthy video. This is must-see stuff, right?

It’s a pretty good bet those cuffs went on a little tighter the second time the cops caught her Wednesday.

Interested in more news from Texas? We've got you covered! See More Texas News
Previous Article BRIGGS: Harvey Recovery Is Who We Are And What We Do In The Oil And Gas Industry
Next Article Lousy People In Pads And Cleats Are Destroying The NFL