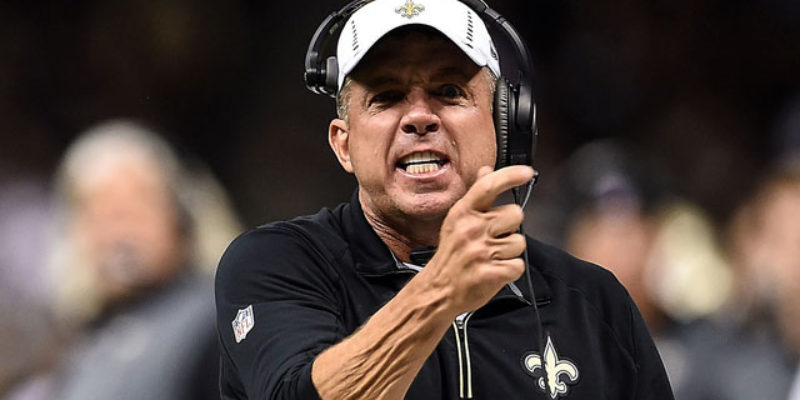 …so it’s not just local folks in New Orleans who say the Saints’ head coach should get the heave-ho. And honestly, with this being the third – or is it the fourth? – straight year of the Saints going 0-2, with the previous three years ending in mediocre 7-9 seasons thanks to the familiar pattern of no defense whatsoever, an underachieving running game and an offense that doesn’t seem to get going until the team is in a significant hole, at some point the finger has to be pointed at Sean Payton.

Which it is. From USA Today…

For over a decade, the Saints were the league’s most entertaining team to watch. They’re still capable of putting up points in bunches, but that is no longer the case.

Watching a Saints game is a lot like watching an Arena League game. There’s plenty of scoring but it just feels … cheap. New Orleans’ 36-20 loss to New England was a complete mismatch, and, despite the scoring, almost a chore to watch. The offense never really got going and the defense never had a chance of slowing down Tom Brady, who threw for 447 yards and three touchdowns a week after this same defense allowed Sam Bradford to put up a career best effort.

The defense has long been a problem. A problem Sean Payton has tried (and failed) to solve by constantly replacing his defensive coordinators. The coaches have changed; the results have not. At a certain point, Payton has to take some of the blame for the team’s defensive woes.

The Saints are undisciplined on the field – that’s a sign of bad coaching. On the very first snap of the season, the Saints defense had only 10 men on the field. On Sunday, the Patriots easily exploited matchups all over the field, and the Saints secondary had trouble executing even the most basic coverages…

But columnist Stephen Ruiz is just getting started…

The front office is undisciplined off the field. Mickey Loomis is the NFL’s king of dead money. Bad contracts have forced him to constantly re-structure players’ deals to open up extra cap space, which only kicks the can down the road and prevents the team from making smart long-term investments in players who deserve such deals. Instead, Loomis has opted for aging and overpriced vets. The Adrian Peterson move, which already looks like a disaster, was a classic Loomis move. The Saints were already well-stocked at running back, but that didn’t stop the veteran GM from giving a 32-year-old running back coming off a major injury $7 million.

Payton’s offenses have kept the Saints somewhat competitive, but the team doesn’t really have much to show for it in recent years. It’s been eight years since Super Bowl XLIV. It’s been four seasons since the Saints have been a threat in the NFC. It’s time to start over, and it starts with replacing Payton and moving on from the best player in the team’s history, Drew Brees.

In all likelihood, Brees will hit free agency next offseason. He’ll command close to $30 million on the open market, and the Saints can’t afford to give him that kind of money while building a quality team around him. Bringing back Brees would likely result in another 7-9 season and a spot right in the middle of the standings – the absolute worst place to be in the NFL.

Ruiz suggests that the Saints might well open the season 0-6 this year, and notes that it might be for the best – because at 7-9, you’re drafting somewhere between 10th and 16th and by then most of the can’t-miss superstars who can make an immediate impact in turning your team from also-ran to playoff contender have come off the draft board. That’s one reason why the Saints’ first round draft picks have made such a meager impact on the team’s play, particularly on defense, in the past several years.

But early in his career Loomis was able to offset not having lots of high first round picks with great finds late in the draft like Marques Colston and Jahri Evans. That hasn’t happened much lately at all, so the Saints are stuck with asking Brees to do the near-impossible and win games on his own (especially since this team, despite having three terrific running backs, can’t consistently run the ball, which is insane).

This is very likely to be Payton’s last year as the Saints’ head coach. Frankly, a younger Tom Benson would have made a change by now. But he’s old, and he’s disengaged, and he’s turned over the power in the organization to Loomis which is yielding terrible results not just with the Saints but with the Pelicans as well, and Loomis is more of the heart of the problem even than Payton is.

Payton is stale. He was stale three years ago. He hasn’t been the same coach since he was suspended from coaching for a year following the Bountygate scandal.

Here are two ideas for bold changes and establishing a new identity within the Saints’ management structure. Neither are likely to happen, but both have lots of potential upside.

First, get Nick Saban. Even if it takes $12-14 million a year and even a small piece of team ownership, hire Saban as head coach and general manager. Saban is out of challenges as a college football coach, and the only bridge he’s yet to cross is redemption for his fizzle as the head coach of the Dolphins. Sure, Saban’s coaching style is better for college football than the NFL – but let’s remember, it was opting for Daunte Culpepper as his quarterback over Brees which led to that fizzle in Miami, and he did that on the advice of the team doctor who wasn’t sure about Brees’ shoulder. Now Saban would have Brees to work with, finally – assuming he could be reeled in for some reasonable amount of money when he becomes a free agent after this year. How much time Brees has left is a question, but Saban has found a way to win football games with defense and line play even without great quarterback play at Alabama – and defense and line play are without a doubt the Saints’ chief concern.

The collateral upside to bringing Saban in is it gets him away from Alabama, which means every LSU fan in the state will appreciate the hell out of the Saints. And since lots of those fans still pine for the years Saban was LSU’s coach, you’re going to get major engagement out of them.

Benson ought to really strongly consider making Saban an offer he simply can’t say no to. If the coach turns out to be as good an NFL man as, say, Pete Carroll was after he’d perfected his craft at USC, you win on the field. If he turns out not to be all that good as an NFL head coach, you win from a PR standpoint.

The other option is perhaps more doable, which is to bring the Mannings back in. Peyton Manning isn’t all that busy, basically doing Nationwide Insurance and Papajohn’s Pizza commercials which are funny as hell and handling a bunch of business investments, and there is no better football man in the game than he is. Plus he’s a New Orleans guy who grew up watching his dad be the face of the franchise. Manning wouldn’t necessarily be what John Elway was to the Broncos, being as though he didn’t actually play for the Saints, but if he had a similar role you would at least have a face for the franchise as the president, GM and minority shareholder that would resolve your leadership issues, you’d have somebody who knows the NFL as well as anybody there is and you’d have a man at the top who would attract coaches and players interested in being part of his organization.

That doesn’t mean Sean Payton would stick around, or that he’d be replaced. What it would mean is it’s no longer Mickey Loomis’ team. That might be a more important move than who the head coach might be.

Interested in more news from Louisiana? We've got you covered! See More Louisiana News
Previous Article Who’s Responsible For Louisiana’s 2016 Economic Performance Being The Worst In America?
Next Article CARLETON: Is LSU Jumping Too Quickly To Conclusions Over Max Gruver’s Death?