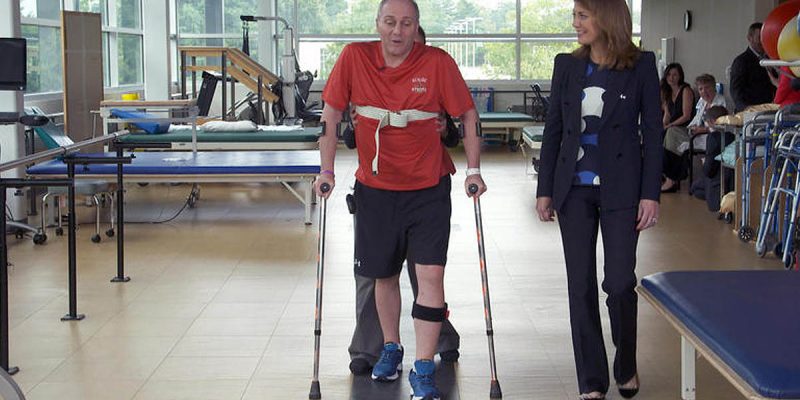 The House Majority Whip and Louisiana congressman’s office put out a press release this morning with some good news, not to mention the encouraging photo above. It seems Steve Scalise is on the mend, and he’s doing what will likely be a must-see appearance with CBS’ Norah O’Donnell on Sunday.

Rep. Steve Scalise (R-La), the House Majority Whip who was shot at a Republican Congressional Baseball team practice this past June, speaks to Norah O’Donnell in his first interview since the shooting. Scalise appears with his wife, Jennifer, to recount the attack and how he survived the life-threatening gunshot wound. The interview will be broadcast on 60 Minutes, Sunday, Oct. 1 at 7:30 p.m. ET and 7 p.m. PT.

That Scalise is doing a bit better isn’t a secret. He’s been receiving visitors from back home since he moved into the rehabilitation hospital in Washington he’s currently residing in and the reports coming back have indicated progress, and while he couldn’t make the trip to receive the Gladiator Award at last week’s Family Louisiana Forum annual gala in Baton Rouge he did record a message to the attendees in which he sounded like the old Steve Scalise.

Lots of eyes in Louisiana will be glued to the TV on Sunday, though. Scalise has a great number of fans and well-wishers who can’t wait to see him in good form, and the 60 Minutes segment will be their first good opportunity to gauge his recovery.

And the fact he’s doing TV interviews again indicates Scalise might well be approaching the point where he can fulfill his desire, stated in that message to the Family Forum gala guests, to finally get back home again.

Interested in more news from Louisiana? We've got you covered! See More Louisiana News
Previous Article BOYD: We Have A Failure To Communicate
Next Article Add Jeff Landry To The Accelerating Cut-The-Saints Train