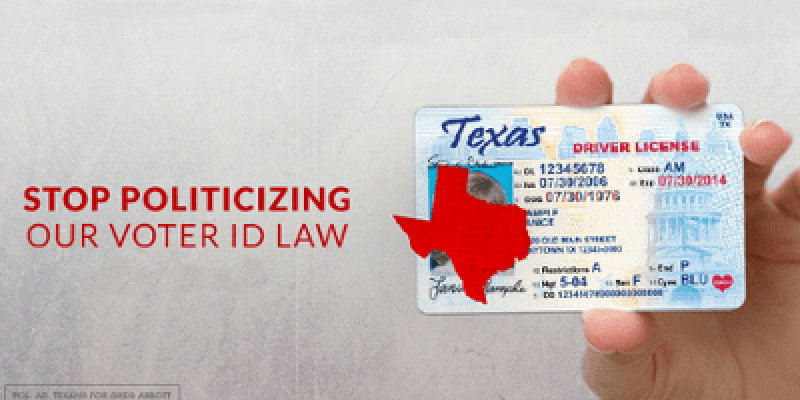 The Texas Voter ID law won a victory in the Fifth Circuit Court of Appeals on Tuesday as an injunction to prevent the law was blocked. In a 2-1 decision, the three person panel decided to allow the ID requirement to go into effect for the November election as the court hears and considers the motion.

In August, U.S. District Judge Nelva Gonzales Ramos blocked the updated ID law from going into effect, claiming it still could have a chilling effect on voters. She compared Texas Voter ID laws to “poll taxes” on minority voters under the assumption that minorities cannot figure out how to get free  IDs. The new ID law would allow people who lack a required ID to cast a ballot if they signed an affidavit and brought paperwork that showed their name and address, such as a bank statement or utility bill. Along with all the other forms of ID already accepted including:

Here is a list of documentation that could be shown to vote:

Additionally, the Texas Department of Public Safety was issuing free Election Identification Certificates, though those were halted with the injunction.

In temporarily overruling the injunction on the Texas Voter ID laws Circuit Judges Jerry Smith and Jennifer Walker Elrod found that Texas had made sufficient changes. In a joint order they wrote:

“The State has made a strong showing that this reasonable-impediment procedure remedies plaintiffs’ alleged harm and thus forecloses plaintiffs’ injunctive relief.”

The dissenting judge, Circuit Judge James Graves Jr. argued that the stay “should be comprehensive. In other words, the correct approach would be to stay both the district court’s order and the new (voter ID) legislation.”

In a statement provided to Politico, Justice Department spokeswoman said, “We are pleased that the Fifth Circuit has stayed the injunction and allowed Texas to proceed with its duly enacted voter identification laws. Preserving the integrity of the ballot is vital to our democracy, and the Fifth Circuit’s order allows Texas to continue to fulfill that duty as this case moves forward.”

Interested in more news from Texas? We've got you covered! See More Texas News
Previous Article Does John Bel Edwards Want To Be John Kasich When He Grows Up?
Next Article Can We Get The World’s Smallest Violin To Play For Hillary?