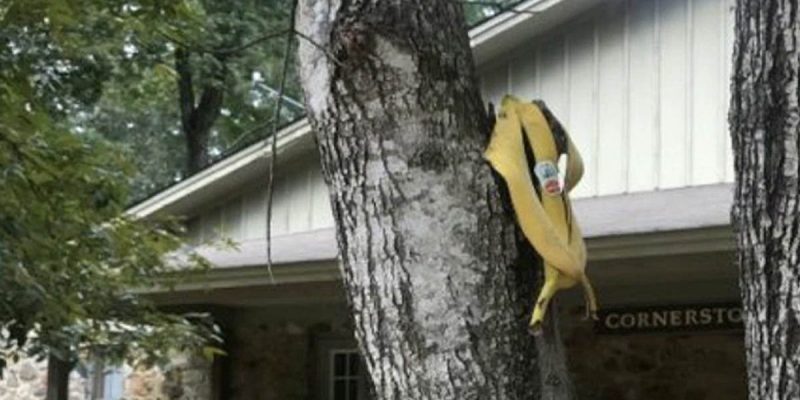 On a campus which has seen race riots, abysmal football, NCAA probation several times and where the students perfected the “Hotty Toddy” chant, it’s no small thing to call something the height of humiliation. But this week’s occurrences at Ole Miss have surely reached Peak Shame.

It’s about a banana peel, and melting snowflakes.

Students at the University of Mississippi — better known as “Ole Miss” — were forced to cancel a “Greek Life” retreat last weekend after a discarded banana peel was found hanging in a tree on campus.

A student, Ryan Swanson, told the student newspaper, The Daily Mississippian, that he discarded the banana peel by throwing it into the tree when he couldn’t find a garbage can.

Makala McNeil, the campus President of Alpha Kappa Alpha, a historically black sorority that was part of the Greek Life retreat, later spotted the discarded banana and, instead of writing it off as mere garbage, assumed the peel was a racially tinged threat.

“The overall tone was heavy. I mean, we were talking about race in Mississippi and in the Greek community so there’s a lot involved,” McNeil recalled about the incident. According to Campus Reform, she later admitted that she and a friend became “just sort of paranoid for a second” after seeing the banana.

What amusing about this is Ryan Swanson is a white kid. He’s the one who ate the banana before tossing the peel into a tree. Because white kids at Ole Miss eat bananas, you know. And we’ll clue you in on another secret – those white kids eat watermelon, fried chicken and collard greens, too.

We’d love to report that Swanson’s response to this stupidity was “What the hell is WRONG with you people?” but we can’t.

Speaking of “What the hell is WRONG with you people?,” here’s a letter this Makala McNeil person wrote to the Ole Miss campus newspaper about the banana peel yesterday – AFTER she was shocked to find out that nobody was trying to trigger her. You’ve got to read it to see just how idiotic all this is…

My sorority sister was the first to see it. We – myself, my sister and another NPHC member – were heading back to our cabins after our large group session was dismissed. As we approached the cabin, she abruptly stopped. Her eyes widened. Her jaw dropped. She frantically pointed at a tree, exclaiming, “Look! Look! In the tree!” It was a banana, dangling from a limb. My heart dropped instantly. I began to scan the area around us to see if we were in any immediate harm. Once we realized we were alone, questions started flying: “Was this here this morning?” “There’s no coincidence that this happened right after we just got done talking about race, right?” “Why would someone put it in a tree? There’s a trashcan a few feet away.”

My sister took a picture of the banana and sent it to other NPHC members, most of whom responded with immediate urgency. For most black participants, the image of the banana in the tree was jarring, an overt sign that we weren’t welcome.

Yesterday, The Daily Mississippian released a news article reporting on a racially charged incident that occurred at Camp Hopewell during an IMPACT retreat this past weekend. NPHC organizations were certain the incident would become public, and, as a collective, we understood the potential pitfalls of allowing white journalists to write our story.

Mainstream news organizations have long prioritized white, conservative perspectives above the voices of black people. We were concerned that our student newspaper couldn’t contextualize the fear that the incident inspired. We were right.

Shortly after the banana was found, IMPACT retreat leaders convened a camp-wide meeting. NPHC members used the space as an opportunity to discuss the racial realities of our university community with our white peers. Some white students seemed receptive. Others appeared apathetic. Many NPHC members denounced the disunity between white and black fraternities and sororities. Black students gave testimony, bearing witness to the subtle racism that pervades our campus.

Bananas have historically been used by white people as derogatory to dehumanize and denigrate black people; a symbol that makes us fearful of our racist past and present. Scientific racism permitted biological stereotypes surrounding the “apelike” qualities of black people to bleed into popular understandings of blackness.

White supremacy categorized Africans and African-Americans as savages, primal and subhuman. According to Professor James Bradley, associating black folk with bananas and monkeys has always been about the “way Europeans have differentiated themselves, biologically and culturally, in an effort to maintain superiority over other people.”

Even today, bananas remain an intimidation tactic, intended to instill fear in black communities. This year, American University elected Taylor Dumpson, a member of my sorority, as the school’s first black female student body president. Opposers responded by hanging bananas from nooses around campus with racial epithets written on them.

Regardless whether last weekend’s incident was an honest mistake or a malicious threat, our response as black Greeks at the University of Mississippi was valid and authentic, especially given the present state of race relations in our country and at our university.

Our community must recognize an uncomfortable reality: that this incident is indicative of a broader campus culture. Since the article’s publication, critics have claimed that NPHC members fabricated or exaggerated the impact caused by a banana.

Yet, what they so easily overlook is that within the past four years, students placed a noose on James Meredith’s statue, klansmen marched on our campus and a community member alluded to lynching black people in online comments.

It is no exaggeration to say that black students often feel as though they are under attack. We must confront a culture that dismisses black experiences, supporting the notion that constructive dialogue can actually foster a level of cultural understanding amongst different races.

How do you have constructive dialogue with someone who goes to pieces when they see a banana peel in a tree? And then when somebody steps forward and says they tossed the banana peel into the tree not because they were trying to intimidate black people but because they were done with the banana and couldn’t find a trash can, this someone touts their moronic overreaction as “valid” and “authentic?”

They were “valid” and “authentic,” all right. Valid and authentic assclowns. Can you imagine somebody considering hiring Makala McNeil and finding this story in a Google search? Can you imagine the lengths that employer will go to NOT to hire her for fear she’ll wreck their company with a similar freak-out?

This kind of thing shows that a college like this doesn’t prepare kids for the real world, and it’s a waste of taxpayers’ and students’ money. That has been true to an extent for a while. It’s inarguable now. Ole Miss can best be described as adult day care if this is how they run the place. What’s worst is Ole Miss isn’t alone at all.