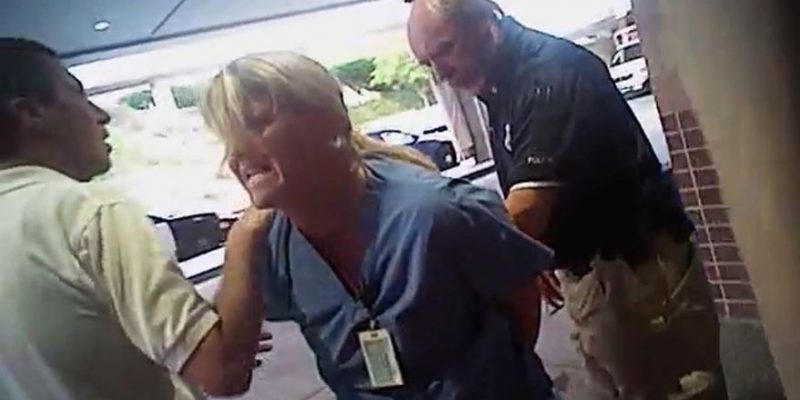 A Salt Lake City, Utah nurse was dragged to an officers car and detained inside for twenty minutes because she refused to unlawful draw blood.

After being on the phone with a representative of the hospital a registered nurse explained that the law did not allow her to draw blood just because the officer ordered her to do so. There needed to be one of three factors in play:

The incident met none of those standards so the nurse could not draw blood. The officer was apparently not at all pleased with the nurse and tried to take her phone away and then dragged her out to his car where she was detained.

The encounter which occurred on July 26th started when a patient was brought in from an accident to the University of Utah Burn Unit in a coma. The man was not a suspect in the accident which led to another driver’s death, but police demanded a blood sample.

Alex Wubbels, the charge nurse, presented the officers with a printout of hospital policy on drawing blood and said their request did not meet the criteria.

When the policy was passed over a year ago the Salt Lake City Police agreed to it according to Wubble’s attorney, Karra Porter.

The University of Utah nurse was released without charge, but the incident has caused great distrust among hospital personnel and police officers.

“I was alarmed by what I saw in the video with our officer and Ms. Wubbels,” Salt Lake City police Chief Mike Brown said in a news conference. “I am sad at the rift this has caused between law enforcement and the nurses we work so closely with.”

The department apologized to the charge nurse and says it has changed its policy on drawing blood.

Wubbles and Porter have met with the police departments to encourage better education on the policy but have not been thrilled with the conversations.

According to a statement from the Salt Lake City Police Department, two officers have been placed on administrative leave pending further investigation.