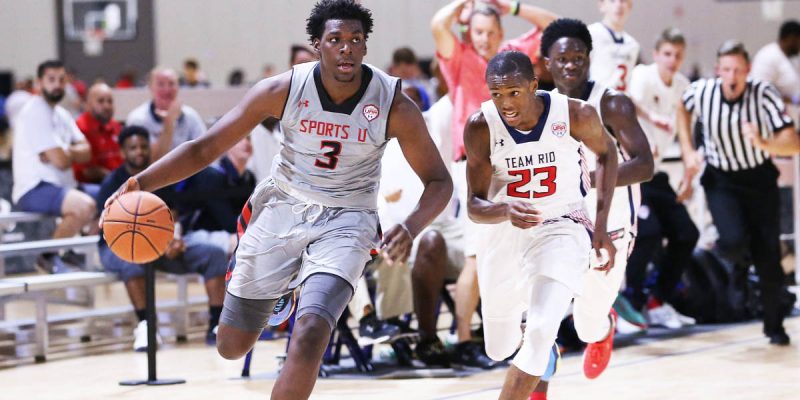 Truth be told, LSU Basketball was back in  business when Joe Alleva landed Will Wade, but with the commitment of the 6-10, 230-pound superstar Reid, a five-star post player from Roselle Catholic High School in Asbury Park, New Jersey, now there’s little doubt about the question.

Since Wade came on board at LSU he’s undertaken an amazing reboot of the team roster. Having overseen the departures of half a dozen players with eligibility remaining he’s already signed a number of quality additions – most of whom will be on the court for his team this winter;

Kiir, Edwards, Waters and Bigby-Williams will help to make up the nucleus of an LSU team for 2018-19 which should also have a few other pretty good players in 6-5 wing Brandon Sampson, who’s a junior this year and is expected to make a major leap into status as one of the SEC’s better players, 6-4 point guard Skylar Mays, who’s a sophomore and adds a lot of versatility and hustle to the backcourt, and a pair of 6-6 wings who’ll be freshmen this season – Galen Alexander and Brandon Rachal. Those eight, along with 6-6 sophomore forward Wayde Sims, should present Tiger opponents with a solid base of talent to contend with.

But the recruiting class Wade is building for 2018 is going to put a lot of the veterans on the bench – and a lot of the teams on LSU’s schedule to shame.

Reid isn’t the first national Top 25 recruit in the 2018 class LSU landed a commitment from. Local superstar Jevonte Smart, a 6-4 point guard from Scotlandville High School, was the first. Smart, who when Wade was hired wasn’t even thought to be considering LSU, chose the Tigers back in June. He’s rated the No. 28 player in the country by 247 Sports and No. 30 by Rivals.com. Having Smart, Sampson, Waters, Mays, Edwards and Rachal in the backcourt for the 2018-19 season makes LSU one of the scariest perimeter teams in the country.

And now Reid, who can team with Kiir and Bigby-Williams in a tall, athletic frontcourt rotation. He’s rated the No. 15 recruit in the country by 247 and No. 19 by Rivals.

What’s LSU getting in Reid? Well, here’s a video…

Just one more; at the end of this one is a coast-to-coast drive and score reminiscent of Shaquille O’Neal at the McDonald’s All-Star Game in 1990…

Needless to say, you can build a championship team around a guy like this, particularly if you have good pieces to go with him.

At this point Wade has two more scholarships to give, and a pair of 6-7 forwards likely to accept them as the November early signing period approaches. One of them is a local product – Josh LeBlanc (6-7, 210) of Madison Prep Academy in Baton Rouge, who’s rated the No. 78 prospect in the country by both 247 and Rivals. The other is Darius Days (6-7, 220), who comes from The Rock School in Gainesville, Florida; Days is rated No. 60 in the country by Rivals and No. 69 by 247. It’s not assured LSU gets both, but they’re certainly in good shape – as they also are for 6-6 wing Kaden Archie of Midlothian, Texas, rated the No. 94 player in the country by 247 and No. 85 by Rivals. Landing all three likely means someone currently set to return for 2018 will be moving on; don’t bet against that given the moves Wade has already made since his arrival.

We’ve been saying it since he was hired in March, and it’s becoming more and more obvious with each passing development; LSU has a potential superstar coach in Will Wade. He hasn’t coached a game yet, but the work he’s done in quickly rebuilding what had been a rather bleak roster is nothing short of remarkable, and now he’s poised to turn the Tigers into a major power in college hoops.

Interested in more news from Louisiana? We've got you covered! See More Louisiana News
Previous Article WAGUESPACK: On Litigation, Louisiana Has A Reputation Worth Changing
Next Article Neil Riser Is Courting Democrats In New Orleans, Which Is Probably A Sound Strategy