Murder number 76 was last night, meaning with two months to go in 2017 this is already the bloodiest year in the history of Louisiana’s capitol city.

Police are investigating after someone in a Chevy Trailblazer shot and killed a woman in a vehicle on Gus Young Avenue Thursday evening.

The woman has been identified as Erneisha Barnes, 19, who lives in the 7000 block of Barbara Cohn Place.

The shooter fired several times from a vehicle, according to police, into the vehicle Barnes was sitting in as a passenger. Barnes was taken to an area hospital, where she later died.

That’s a fact pattern pretty similar to several of the other murders in Baton Rouge this year – it’s a drive-by shooting, and at least by appearances it’s a completely senseless killing. Maybe it’s a drug purchase gone wrong, or maybe it’s just a random murder that can’t be explained by much else other than stupidity and depravity.

There’s little question at this point but Baton Rouge has a significant cultural problem in that too many of its kids are being raised as monsters with a nihilistic view of life and a complete lack of any goals or ambitions. How you fix that other than by steamrolling the neighborhoods where those monsters are being raised, dispersing the residents to the four winds where maybe some of them might find environments possessing a more productive culture that they might assimilate into and then bringing in other people to occupy those same neighborhoods as they’re redeveloped, none of which is even remotely politically possible, we can’t say. 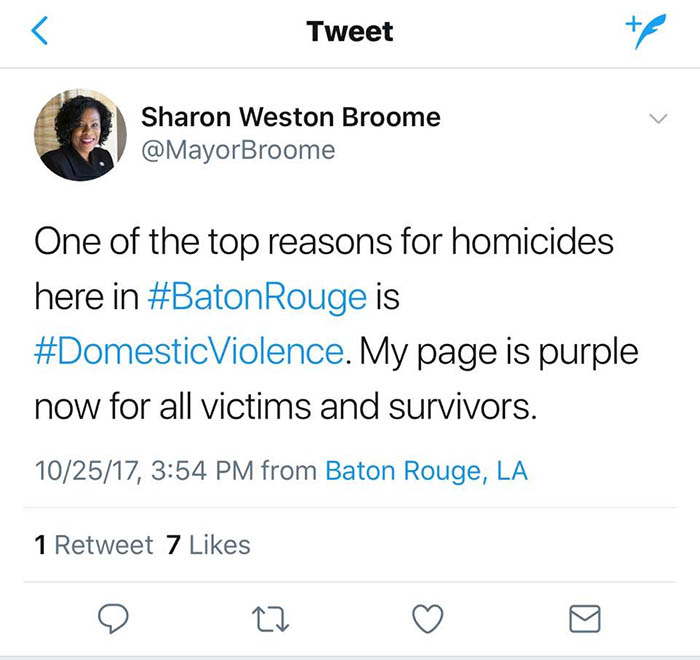 No, social media slacktivism won’t solve the murder problem in Baton Rouge. Not when it’s drugs and gangs responsible for all of them. And of course thanks to Sharon Weston Broome’s crowd, Baton Rouge might well be Ground Zero for the Ferguson Effect following the Alton Sterling fiasco – which has turned drugs and gangs into an even larger dominant reality in the northern part of the city.

Not to mention the looting of the BRAVE program, which gutted one of the few effective law enforcement ideas working in North Baton Rouge to stop violent crime.

We can’t say things are going to continue to get worse until Broome is gone and better leadership is found…yet. What we can say is things have never been worse than they are right now. This might not be rock bottom, but with last night’s murder breaking the Baton Rouge record with two months to go, it sure looks like it.

Interested in more news from Louisiana? We've got you covered! See More Louisiana News
Previous Article APPEL: Let’s Talk About The Industrial Tax Exemption Program (ITEP)
Next Article So, Anybody Else Having A Paul Manafort-Kevin Spacey Kind Of Day?