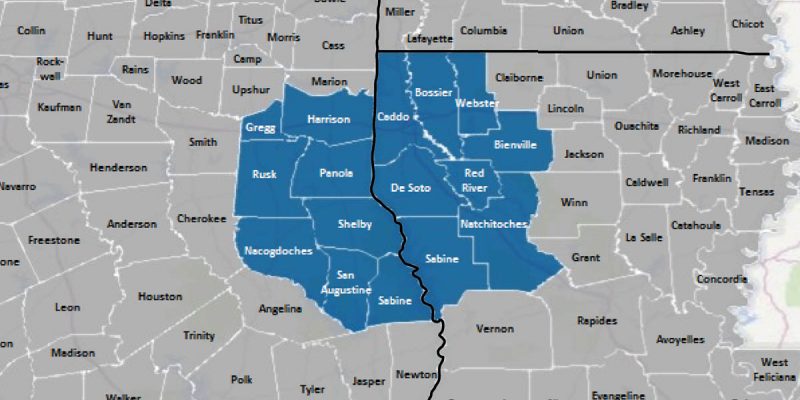 The number of rigs working in the Haynesville Shale has tripled since 2016, and the Wall Street Journal has noticed. From a long piece posted today…

One of the early centers of American shale drilling is roaring back to life, boosted by a building boom of petrochemical plants, fertilizer factories and gas-export terminals along the Gulf Coast.

The Haynesville Shale, a giant natural-gas field in northwest Louisiana, was one of fracking’s hottest spots a decade ago. But it fizzled out about five years ago as gas prices plunged and drillers focused on finding oil next door in Texas. Now, the Haynesville is being reborn as companies with longstanding positions in the area, such as Chesapeake Energy Corp., and newcomers seeking opportunity rush back in and drill again.

Gas production from the Haynesville has risen more than 20% so far this year, to more than 7 billion cubic feet a day from less than 6 billion in January, according to the U.S. Energy Department. The number of rigs active in northern Louisiana parishes and the Texas portion of the field has more than tripled in the past year to 44, according to oil field services company Baker Hughes Inc.

What whacked Haynesville production was the combination of terrible natural gas prices and the multiplicity of “wet plays” popping up all over North America – namely, fields where both oil and natural gas were discovered. With oil fetching a better price, gas could be recovered from those fields and produced as a secondary product. Haynesville being a “dry” play, with no oil in it, the profitability of wells in the south-of-Shreveport gas patch was nil.

But build a bunch of new petrochemical plants hooked up to the pipeline infrastructure coming out of the Haynesville Shale, and in particular those LNG export terminals in the Lake Charles area, and all of a sudden you’ve opened up a lot of demand for that gas.

Driving the trend is a dramatic reduction in costs. Three years ago, the Haynesville had the most expensive well costs in the Lower 48 States, in part because its fuel-bearing rocks are the deepest in the U.S., some more than 15,000 feet underground. But in 2014, when oil prices started to plunge from over $100 to less than $50, some companies refocused on natural gas and began experimenting with technology such as long lateral wells that has helped improve the economics of extraction.

Rising demand for gas has boosted the area’s prospects. The U.S. Energy Department forecasts that between now and 2040, consumption of natural gas will increase more than that of any other fuel source, as demand from big industrial users rises and power plants rapidly replace coal-fired facilities.

Regional producers can now also export their liquefied natural gas.  Cheniere Energy Inc.’s Sabine Pass LNG plant, a major exporting facility that opened in Louisiana last year, is sending cargoes of liquefied natural gas to Asia, Europe and South America. A dozen other LNG projects are under construction or are permitted and planned in Texas, Louisiana, Mississippi and Maryland.

That’s a potential drawback for industrial users in the area, such as petrochemical plants, of which there are almost 80 under construction along the Gulf Coast. They fear the price of gas—their main feedstock—could rise as America ships more to foreign buyers.

The good news is there’s plenty enough for everybody. Back in 2010 the U.S. Geological Survey estimated there were some 70 trillion cubic feet of natural gas in the Haynesville Shale. The USGS’ new report says the real number is more like 300 trillion cubic feet. That’s a colossal supply.

Which means landowners in Northwest Louisiana appear to be back in the money, and economic activity in that part of the state should be percolating again. Given that Louisiana had the worst-performing economy in the country last year, we’ll take it.

Interested in more news from Louisiana? We've got you covered! See More Louisiana News
Previous Article What On Earth Is Going On With The Fathers Killing Their Kids In Louisiana?
Next Article Obviously, We At The Hayride Endorse John Schroder For Treasurer