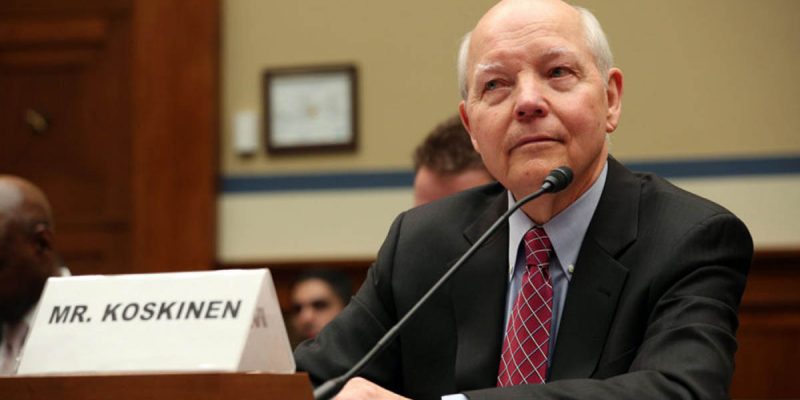 The smug Democrat lawyer who essentially told conservatives “F You” multiple times in congressional hearings about the Lois Lerner/IRS persecution of Tea Party and other right-leaning organizations is at long last going to be off the public dime. When Koskinen’s term is up next month he’s gone.

President Trump made it official on Thursday that embattled IRS Commissioner John Koskinen will be out of a job next month.

Koskinen’s term ends on Nov. 12. He was eligible for reappointment, but Koskinen is fiercely opposed by congressional Republicans. Members of the House Freedom Caucus attempted but failed to impeach Koskinen last year, largely over his handling of the scandal involving former IRS official Lois Lerner.

Prior to Koskinen’s tenure, Lerner was accused targeting conservative groups who applied for non-profit status. Koskinen was accused of stonewalling congressional investigators looking into Lerner’s activities as well as of covering up for the Obama administration.

It’s been a considerable source of consternation how Koskinen could have possibly survived Trump’s inauguration, given the noxious state of his image with so large a swath of the taxpaying public. Turns out Trump was just biding his time until Koskinen would go quietly.

Kautter, Koskinen’s intended replacement, was appointed to his role at Treasury in August. He worked as a tax attorney at the firm Ernst & Young for more than three decades.

Kautter will still perform his Treasury Department duties while overseeing the IRS, according to Treasury Sec. Steven Mnuchin.

“David will provide important leadership while we wait to confirm a permanent commissioner,” Mnuchin said in a statement, according to Bloomberg.

The replacement of the worst of the reprobates in the Obama administration has been a too-slow process, but it’s certainly moving forward.

Interested in more national news? We've got you covered! See More National News
Previous Article The Confidential Informant Just Got Released From His NDA In The Uranium One Case
Next Article From The JFK Assassination Files: Was Lyndon Johnson A Klansman?