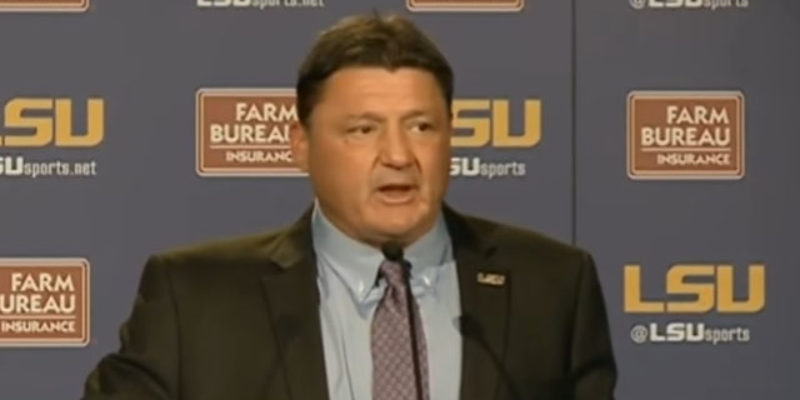 …there comes yesterday’s Chris Landry podcast, in which the Louisiana native and former NFL scout, who spent quite a bit of time involved with the LSU football program in the 1980’s and 1990’s, brought out details of the infamous meeting between LSU athletic director Joe Alleva, head football coach Ed Orgeron and offensive and defensive coordinators Matt Canada and Dave Aranda.

You can listen to the whole 33 minute podcast here. If you don’t have the time or can’t do a podcast thing, there was a pretty comprehensive cliff notes posted at TigerDroppings here, which we’ll more or less crib, with some paraphrasing and additions for clarity, for our readers’ benefit…

It’s fair to say that if Landry’s sources have properly characterized that meeting a week ago, that LSU is trying something without a particularly strong track record of success. Football coaching staffs are not typically democracies – nor are any small organizations with a tight focus of activity. Strong leadership structures are almost always crucial components of success, and it’s apparent Alleva is attempting to make LSU football’s leadership structure as weak as possible, either for his own pleasure as Landry suggests, or because he has no confidence in Orgeron.

You can’t hire a football coach at a salary of some $3 million or more per year and then rob him of the ability to control his program. Or if you do set up so out-of-balance a structure, you certainly can’t do it on the basis of giving that coach a $12 million buyout which makes him unfireable. None of that makes sense in the slightest.

But in the short term, who knows? Canada and Aranda both have outstanding reputations as coaches, and it’s entirely possible that leaving them alone to design and execute schemes against LSU’s opponents will work fine. It’s worth saying that while the win over Florida was quite possibly a one-off achievement not duplicable against a better opponent like Auburn, and let’s face it, LSU won that game because a very good kicker missed an extra point thanks to a bad hold, Canada and Aranda both looked like they’d outcoached the competition on the other sideline. Maybe they can keep doing that, and maybe with LSU’s team looking a little healthier now than they were earlier in the season the team can muddle through without things falling apart.

But – again, if Landry’s sources are providing an accurate portrayal of what happened last week – this is not how a successful football program gets built. Successful programs are built on having a competent, charismatic leader at the helm in whom everyone has confidence and who exercises a firm hand of control over very good people he attracts and selects to work with him. And what LSU has instead is a weak leader under the thumb of an AD who has no football expertise of note, operating what amounts to head-coach-by-committee.

There is a reason nobody else does business like this, and it’s fair to say Joe Alleva is not smarter than all the other athletic directors who wouldn’t dream of running a program this way.