That’s a hell of an accomplishment by Oct. 20, right? Two months and change left in the year. Maybe we can start calling this town Bleedin Rouge now in honor of the murder victims strewn all over our streets.

One person is dead after a shooting in a park late Thursday night, according to investigators.

The Baton Rouge Police Department reported officers were called out to investigate a shooting in a park on Peerless Street just after 11:15 p.m.

Officials said the victim was shot multiple times. They added the victim did not have any type of identification on him.

That was one. It wasn’t the only one.

A woman was shot and killed inside a vehicle Thursday night, police said.

Investigators said the shooting happened Thursday at the corner of Evangeline Street and North Foster Drive around 8 p.m.

Sgt. L’Jean McKneely Jr. with BRPD said the woman was a passenger in the car and was driven to Evangeline at Airline Highway. The driver then called police to report the shooting.

According to McKneely, witnesses said they saw a man walk up to the vehicle and fire a shot into it.

He added investigators don’t yet know if the shooting was random. He explained there were several people in the car and the shooter just walked up and fired a shot inside the car while it was stopped at a red light. He said this was not an attempted carjacking or anything like that.

That makes 74 murders in Baton Rouge in 2017. The murder rate here is almost double that of Chicago. 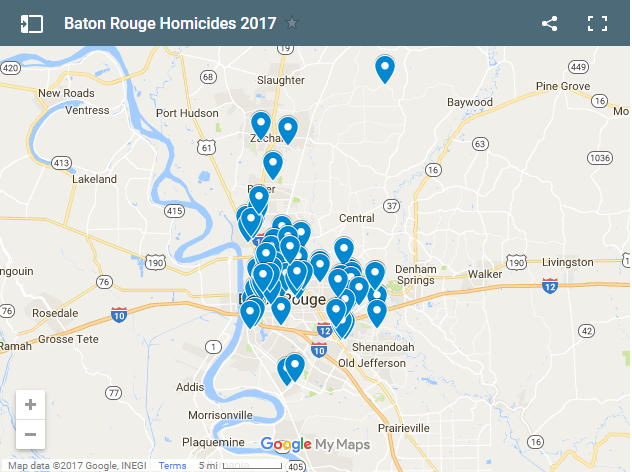 But it’s OK. Help is just around the corner, courtesy of paid volunteers Mayor-President Sharon Weston Broome is unleashing on the high-crime areas…

Baton Rouge officials are hoping that deploying volunteers for community organizing along with a Baton Rouge Police Department mentorship program will help to reduce crime and rebuild some of the city’s most dangerous neighborhoods.

Mayor-President Sharon Weston Broome’s administration said Thursday that they and the national AmeriCorps nonprofit are creating eight, full-time volunteer positions for people who can create neighborhood associations, start neighborhood watch groups, help community members get to know police officers and provide other assistance in at least five Baton Rouge neighborhoods. The Baton Rouge Rebuilds AmeriCorps Vista fellows will be liaisons between Broome’s office and the neighborhoods.

The volunteers will also receive a “living allowance” of $12,312 annually, health and child care benefits and they can receive financial awards at the end of their service to pay for education or student loans.

“It takes a village and it’s not just law enforcement, it takes us as well working hand-in-hand with law enforcement,” said Makesha Judson, the chief service officer for City Hall.

Judson, Broome, and representatives from the Baton Rouge Police Department and Corporation for National and Community Service explained the programs Thursday morning to a group of local nonprofit leaders, community organizers, political representatives and others.

If that seems a bit inadequate to combat a full-scale explosion in the city’s murder rate to you, trust us – you’re not alone.

We’ll settle for small miracles at this point – like, perhaps, hoping we can get through this weekend in Baton Rouge without breaking the record and burying our 75th and 76th murder victims of the year.

Interested in more news from Louisiana? We've got you covered! See More Louisiana News
Previous Article Does Derrick Edwards’ Excuse For Filing Late Campaign Reports Disqualify Him For Treasurer?
Next Article A LOT Of Caldwell Parish People Ate The Wrong Pot Of Jambalaya