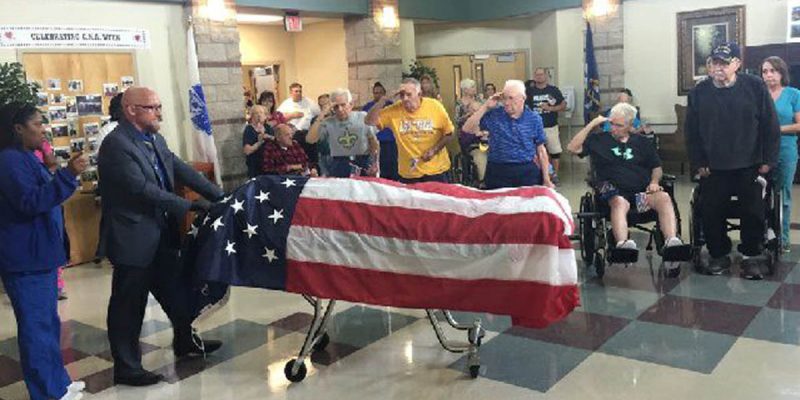 Twin brothers, both LSU tigers, answered the nation’s call. It was 1944. James “Jay” Russo, Jr. (known to me as “Mr. Jay”), and his brother Edmond, joined the army, and after training, they were sent to the Philippines as pilots. They flew L-4 “Grasshoppers.” The small single engine aircraft was used primarily for reconnaissance and target acquisition, and verification, for field artillery.

Mr. Jay was assigned to a military police command in Manila. He was a special pilot for the criminal investigation command (CID) unit that was based out of a local airfield. Mr. Jay flew many sensitive CID missions during his tour. One day he was asked to provide air reconnaissance to aid the investigation of large-scale thefts of United States Army property by the Hukbalahap (Huk) communist insurgency. Much of this property was being used by communist forces in their efforts to destabilize the efforts of the United States forces assisting the government of the Philippines.

Mr. Jay and a CID observer, Lt. William Turner, worked to determine if the thefts of material were simply domestic or the work of the communist insurgency. Mr. Jay and Lt. Turner boarded Mr. Jay’s L-4 (emblazoned with the name “Johnny Reb”) and took off to patrol.

Mr. Jay was used to flying his plane so low that ground crews would later have to pick the grass off the wings. While at an altitude of 100 feet over Luzon, Mr. Jay spotted someone attempting to escape in a US army vehicle. Mr. Jay flew down to an altitude of about 10 feet for a closer look and put the aircraft in a position where Lt. Turner could decide the next step. Mr. Jay heard gunfire from the ground, the plane was struck, it shuddered, and the airplane quickly lost what little altitude it had and crashed.

The aircraft wreckage caught fire. Mr. Jay was unconscious and his leg was on fire. Lt. Turner was able to pull Mr. Jay from the wreckage. As a result of the crash, Mr. Jay suffered a broken back, a broken jaw, facial lacerations and third-degree burns. He spent the next 16 months in a military hospital in Augusta Georgia. What complicates the issue was that this incident occurred on April 15, 1946 some eight months after the official end of the war.

During the official review, Mr. Jay gave testimony that resulted in Lt. Turner being awarded the Soldier’s Medal for his heroic actions. Unfortunately Mr. Jay received no recognition for his suffering. After many years, Mr. Jay’s family and I, recently sought to have Mr. Jay’s efforts recognized by awarding him the Purple Heart for his numerous injuries. The Army refused and Mr. Jay was never decorated for wounds he sustained that day. This was, and is, a nearsighted failure of government policy.

In typical government fashion, one soldier was awarded a medal for his bravery because it could happen any time, Mr. Jay could not receive a Purple Heart because the war was over and it was peacetime. My argument to the Army was that the man who shot Mr. Jay down didn’t think the war was over. In fact, the communists were hard at work fighting the US forces, warming up the world for the coming Cold War. The official Cold War would not begin until the Truman doctrine was put into play in 1947.

But Mr. Jay never complained, never took animus towards his country and he lived his life with extreme honor. He was a retiree from a career of work for the State of Louisiana, he raised his family and he instilled in his sons the respect and honor for the nation and the flag he fought under.

Recently, Mr. Jay passed away. He had been a resident at the Louisiana Veterans’ home in Reserve. In his final days he had the love of his family and the comradeship of his fellow veterans in residence.  Accompanying this article is the photograph of Mr. Jay’s earthly remains being transferred from the facility. The veteran soldiers and sailors in attendance made the painful effort to stand, some successfully struggling to their feet from their wheelchairs, where they stood at attention and saluted their fallen brother and the flag that he selflessly fought under to preserve our freedom and our future.

For all of his trials, and through all of his efforts to recover from his wounds and lead a successful life, the one thing Mr. Jay never did was take a knee.

The dichotomy of generations is quite distinct. There are people in our nation that forget about honor. They forget about respect. They simply succumb to the will of their group and end up, as Marx defined, useful idiots. Lacking both the true understanding of their actions and the true impact of their folly that, in the end, works against them and their goals. We can all learn a lot from the life and efforts of a man that I knew over 40 years. A man who loved his God, his country and his family. One thing I learned from him. I will never take a knee.

Interested in more news from Louisiana? We've got you covered! See More Louisiana News
Previous Article Shouldn’t We Have A Special Prosecutor To Investigate The Russian Uranium Collusion?
Next Article What On Earth Is Going On With The Fathers Killing Their Kids In Louisiana?