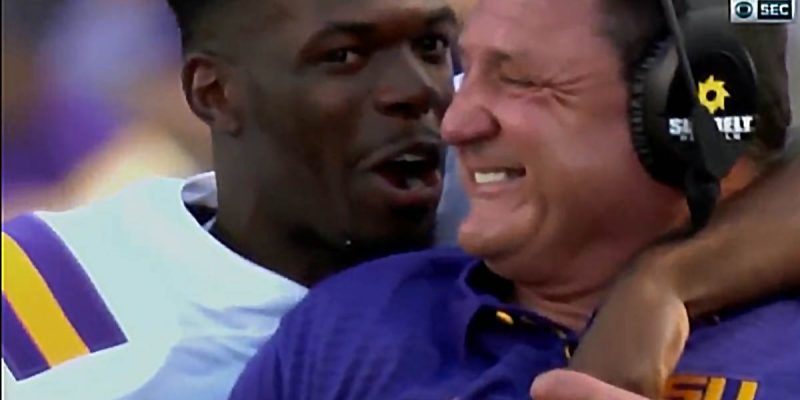 For the first time this season LSU’s 6-2 football team is heading into an open date, and therefore it’s worth taking stock of where things stand in Ed Orgeron’s first season.

Orgeron is coming off arguably his team’s best performance of the year, a 40-24 win at Ole Miss in which the game was considerably more lopsided than the score. LSU had nearly 600 yards of total offense, Derrius Guice ran for 276 yards, far and away his best performance of the year, Darrell Williams became the first player in LSU history to rack up 100 yards rushing and receiving in the same game and the defense intercepted Ole Miss’ quarterbacks three times while holding the Rebels well below their season average in total offense.

With a couple of exceptions – the kickoff team was terrible, for some reason Ole Miss was far more successful running the ball than anybody would have expected and LSU’s wide receivers didn’t catch a pass (there were a couple of inexplicable drops) – it was a dominating effort. That Ole Miss is the weakest of the four SEC opponents the Tigers have played so far doesn’t really diminish Saturday’s performance.

What remains of the 2017 schedule is a trip to Tuscaloosa to face #1 Alabama in two weeks, and then three very manageable games – a home tilt with 2-5 Arkansas, who hasn’t won an SEC game in four tries and in fact has been outscored 191-94 in those games, then a road game with 3-4 Tennessee who is also 0-4 in the SEC and has been outscored 127-36 in conference play so far, before finishing the regular season in Tiger Stadium against 5-2 Texas A&M, who is 3-1 in the SEC but hasn’t really been dominant. The Aggies’ conference wins were a 50-43 overtime victory over Arkansas, a 24-17 home squeaker over South Carolina and a 19-17 road win over Florida.

The short version is LSU ought to be favored in those three games at the end of the season, though clearly they’ll be an underdog against Alabama.

So if nothing surprising happens the rest of the way, would a 9-3 overall record, 6-2 in the SEC, satisfy you?

Should it come out that way, the rather obvious reaction is going to be extreme irritation at the loss to Troy earlier this season which put Orgeron and his team in crisis mode. The argument can be made that it was the Troy loss which gave LSU a needed wakeup call heading into the bulk of SEC action. Following that loss, last year’s team MVP Duke Riley paid the current squad a visit and gave them a stern talking-to which is reputed to have paid dividends, and a rather unconventional meeting between athletic director Joe Alleva, Orgeron and the offensive and defensive coordinators to reset roles on the coaching staff appears to have had a positive result. LSU has gotten better each week since the Troy game; the Tigers weren’t particularly impressive in a 17-16 road win over Florida, but it was a gutty performance nonetheless, and after falling behind 20-0 against Auburn LSU really seemed to hit their stride; they’ve outscored opponents 67-27 in the last 6 1/2 quarters.

So far you could see Orgeron’s first year heading the Tiger program in one of two ways. Certainly you can look at the trend and see three straight wins in SEC play, each perhaps more impressive than the last, and an offense which is more and more adept at finding ways to move the football. You could also note that the simplest explanation of why this team looks so much better than it did earlier in the season is health – Ole Miss was the first game all season Guice has looked anything close to healthy after fighting through a banged-up knee suffered in fall camp, and it was also the first game Arden Key looked like he was in real game shape. LSU also got Toby Weathersby and John Battle back from injuries which held them out of the Auburn game, and Ole Miss was the second game Frank Herron has been able to play since sitting out the first half of the season with a suspension. Even Williams, who has played in every game, has been gimpy with an ankle for the last few weeks; he looked close to 100 percent Saturday.

And with all of the missing players early in the season, Orgeron and his defenders can say they didn’t really get a fair trial in games like the Mississippi State loss, an unimpressive (but not all that bad in retrospect) 35-26 win over Syracuse and the Troy loss. An LSU team with a healthy Guice doesn’t lose to Troy and probably runs Syracuse off the field.

And with a couple of true freshmen starting on the offensive line, that this offense is functional at all is impressive, those defenders would say.

Orgeron’s detractors, who have less of an argument now than they had prior to the current win streak, would note that the injuries and attrition are more than a little bit of bad luck. Some 13 players were suspended for the first game for “violations of team rules,” which in most cases were failed drug tests – that’s an indication they had a preference for smoking weed over winning a championship, and it’s not a good look for the program. In Key’s case, he was out of shape after leaving the team in the spring and returning in August coming off a shoulder surgery the coaching staff didn’t even know he’d undergone, and therefore he was a shadow of the player LSU expected to have. And as for the offensive line’s problems, the reason they’re playing a pair of true freshmen is an alarming amount of off-season attrition – five offensive linemen left the program between the 2016 and 2017 seasons, one of whom being Maea Teuhema who was expected to compete for All-American honors this season. Teuhema getting himself suspended and leaving the LSU program before his money year is nothing short of a bizarre occurrence, and the line has never recovered.

So Orgeron gets a lot of credit for holding the team together and he looks to have righted the ship. That’s not easy to do at a place like LSU, where the football team is practically the beating heart of a whole community and emotions always run high, and it’s also not easy to do when the rough start was considered as evidence of dysfunction at the top. Lots of coaches can fix problems their predecessors created; not that many can fix the ones of their own making.

But clearly, LSU is going to need a better offseason next year than the one they’ve had this year. They’ll need to learn from this year’s troubles, if for no other reason than that instead of BYU (who’s currently 1-7) they open next year with a neutral-site game with Miami.

But Orgeron can buy himself some leeway for the offseason with a 9-3 regular season finish. Nobody expects him to beat Alabama at Alabama in two weeks; that would take a miracle and this team doesn’t match up well with the Tide at all. It’s those three much more manageable games against coaches on hot seats at the end of the season which will set the trend.

Anything less than 9-3 would mean LSU ends the season with a loss to a team they were supposed to beat, and that will set off a lot of grumbling in TigerTown.

But if it does end in 9-3, how would you feel as a Tiger fan? Good? Bad? Indifferent?