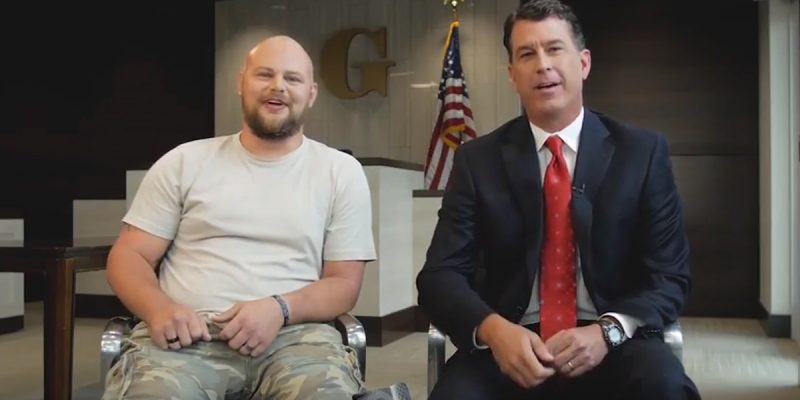 If you live in Baton Rouge, you’ve been up to your ears for some time in the interminable Gordon McKernan personal injury lawyer ads, which have metastasized into preachy billboards with biblical references and TV spots dripping with family images which make people wonder what political office he’s going to impose himself on.

Bear with us here. There is a longer version of the 30 second spot McKernan is running which is a lot more descriptive of the work Fisher House and the other charities supporting our veterans do, and the difference that can make in the life of an injured vet…

That second clip is what makes the first one so objectionable. Why? Because it’s very clear that it’s an excellent and necessary thing to support Fisher House and the other charities which do such important work for such outstanding Americans.

And then you go back to the 30-second spot McKernan is running on TV and radio, and see how he’s doing it. He’s raising $50,000 – which is now $75,000 – by matching half – now a third – of that number that he expects the public to give. But he’s doing it by spending considerably more than that on an ad campaign that promotes his business.

The $25,000 he’s donating to Fisher House is tax-deductible, so it’s a writeoff as well as a marketing expense. He could easily afford to make that number $125,000.

It’s just an exceptionally crass, self-promoting way to operate. Why not just donate the ad time to Fisher House and ask the viewers to call or log on to their website to give? Or why not use it to promote a fundraising event?

Instead he’s shooting it from his faux-courtroom studio, complete with that “G” on the wall in the background, and he’s using his own website as the place to go to donate for Fisher House.

And if you go to that site, here’s what you’ll see…

We wouldn’t exactly call that “prominent.” What’s prominent on that website is Gordon McKernan. Which is fine, it’s his website, but good grief.

Look, it’s a good thing that he’s now bumped the fundraising goal up to $75,000 since he’s hit the $50,000 mark. That’s a testament to the effectiveness of his media buying strategy and the goodwill of the community toward the idea of helping veterans.

We’re just wondering if so noble a pursuit has to be pursued this way.

Exit question: one wonders how all the veterans who drive trucks for a living, and there are lots of them, feel about that cause being taken up by a guy who advertises as a bit part of his business model that he sues on big-rig wrecks.