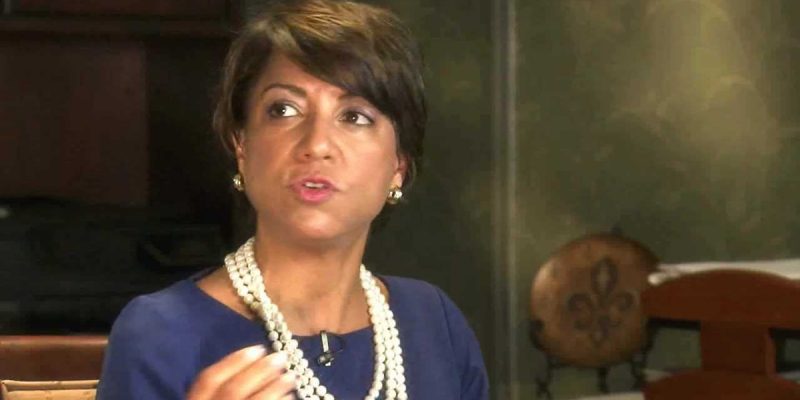 After this piece was originally posted on October 2nd, a Charbonnet family member reached out with corrected family lineage.  Below is re-written with information direct from the family member and the version corrects the genealogical and family errors in the previous version.

One of the top candidates running for mayor of New Orleans has a complicated past when it comes to race.  Desiree Charbonnet may very likely become the first female mayor of New Orleans. When closely examined, her “black creole” genealogy fits right in to New Orleans, but it’s likely a conundrum to most non-New Orleans natives.

It’s complicated and confusing. Jean Barthelemy had three daughters and three sons, one of the sons being Amable Barthelemy Charbonnet who was born in Haiti and moved to New Orleans.  Amable had a black slave mistress named Marie Louise Melite Beaulieu, although she is said not to have been owned by Amable Charbonnet.  Amable and Marie Beaulieu had two daughters and one son. Amable and Beaulieu’s son was named Dorson Louis Charbonnet.  Dorson was married twice and had children with each spouse.  Desi Charbonnet comes from the lineage created by Dorson and wife Nellie Charvet.  Amable married a French woman named Marie Languille, after the birth of Dorson, and Languille is the mother of the white New Orleans Charbonnet family.

New Orleans and Louisiana were known to have a placage system in the 1700s and early 1800s.  This resulted in mixed-race families. The patriarch often held the “side” family in the same esteem as his first family.  These side marriages elevated the African family members, creating a class identified as “black creole,” that separated them from free people of color and slaves.  The patriarch often provided slave-servants and, in some cases, the second family owned slaves.  This created a separation amongst people of color in New Orleans for centuries until the 1960s when integration threw aside a complex social order and classified all blacks as simply black.

The Charbonnet family owned slaves, although research indicates only on the white side.

The Louisiana Native Guard consisted of 1,100 volunteers of African or mixed-race descent.  Some switched over to the Union after the fall of New Orleans in 1862, however records indicate D.L. Charbonnet only served on the side of the Confederate States of America.

The Tale of Two Families shows distinguished and successful families.  Lawyers, investors, and business owners are found on both sides.  The white branch of the family produced a Rex, King of Carnival, in John D. Charbonnet.  The black Charbonnet family has a successful funeral home, a former state representative (Louis Charbonnet III), and former judge Desiree running for mayor. It too has carnival ties with the only publicly known being Desiree’s brother Bernard Charbonnet and the Bunch Club.  Both Charbonnet family branches have members active on civic and government boards in the city.  The Charbonnet family’s success rejects the allegations of racial superiority or inferiority.

The mayoral race has two other candidates with potentially mixed heritage.  A search in the national archives shows 25 results with the last name Cantrell, candidate Latoya Cantrell’s married name, who served in the Confederate Army in Louisiana.  The last name Wilder, her maiden name, returned 56 results with that name who served the Confederate Army in Alabama, her paternal family’s home state.  Cantrell has a very light complexion.  It should also be noted that an Edmond Bagneris shows up in searches for Confederate soldiers in Louisiana, possibly related to Judge Michael Bagneris, also a candidate for mayor.

Desi Charbonnet’s skin tone is very light.  Her complexion is similar to that of many in New Orleans. Another prominent black creole family in the New Orleans political realm is the Morials.  Current Mayor Mitch Landrieu often said during the monument removal process that “we need to reckon with our past.”  From appearance’s sake, most people see Mitch Landrieu as white.  But he too is mixed race as his great grandmother was African. The Landrieu family actually marked themselves black and mulatto on U.S. Censuses until 1920 when they began marking their race on the census as white.  Landrieu has never addressed his biracial makeup, yet he lectures the public about the city facing its “messy past.”

As the Confederacy is judged across the United States, and slavery is the big sin past figures are condemned by today, New Orleans has a complicated past to face. The descendants of white Confederates are held in moral contempt by the liberal left.  How does the public view Desiree Charbonnet’s family history?  What does the candidate herself think of her heritage?  And what does she think of other New Orleanians with Confederate and or slave owning ancestors?

The three black Democrat candidates with ancestral ties to the Confederacy would likely prefer their past be erased than documented.  Will this election be a time of racial reflection, a teaching moment from which leaders will emerge, or will they hide away from the topic and try to rewrite the past?  If New Orleans is to have an open discussion about the past, this candidate creates that opportunity.

Interested in more national news? We've got you covered! See More National News
Previous Article Is Anybody Else Put Off By Gordon McKernan’s Cynical “Help The Vets” Campaign?
Next Article The Push Is On To Get Conservative Superstar Kyle Duncan Appointed To The 5th Circuit