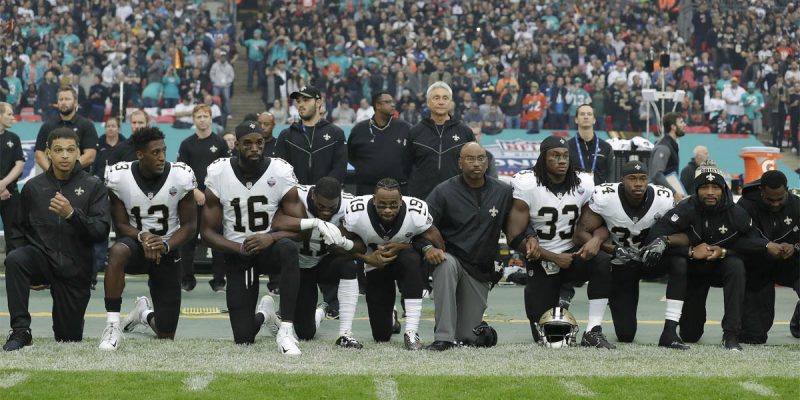 The New Orleans Saints have a wonderful 50 year relationship with long suffering fans that have supported the team through mostly losing seasons. Unfortunately, the team is putting that relationship in jeopardy with their asinine position on the National Anthem controversy.

For some unknown reason, the team’s management and coaching staff have decided to support the right of disgruntled players to protest alleged social injustice during the National Anthem. In week 3 of the season, ten players sat for the Star-Spangled Banner and since that time multiple players have been kneeling prior to the anthem being played.

These stunts have been greeted by well deserved boos by upset fans in the Louisiana Superdome. Sadly, the team has not gotten the message that their actions are insulting to patriots who believe this type of protest is disrespectful to not only our veterans, but also to all Americans who love their country.

By kneeling, the team is showing solidarity with Colin Kaepernick, the former San Francisco 49ers Quarterback, who started the National Anthem protest last year. At that time, Kaepernick claimed that he was protesting police brutality and racial injustice. The problem is that Kaepernick wore a t-shirt in support of communist Cuban dictator and mass murderer Fidel Castro. He also wore socks depicting police officers as pigs. Thus, it is mind boggling that any team would allow players to be associated with such an idiot.

This week, the controversy was brought to the forefront once again when Retired U.S. Navy Commander John Wells, Executive Director of the Military Veterans Advocacy organization, decided to reject a People’s Health Champion award that was supposed to be presented to him at this Sunday’s home game. The award is given during each game in the Louisiana Superdome to a senior citizen who demonstrates “exceptional achievements.”

Although Wells said he was “honored” to be selected for the award, “since this award is tainted with the dishonorable actions of the NFL and its players, I cannot accept it. To do so would be hypocritical.” Instead of privately meeting with Mr. Wells to discuss the issue, the Saints issued a lengthy public statement blasting the retired Navy Commander. According to the Saints organization, Wells chose to “distract from awareness we hoped to build throughout our community.”  Really, the team is criticizing a disabled veteran with over 20 years of service to his country for having the audacity to “distract” from their great “awareness” building. Instead of awareness, the team is building community resentment by their disrespectful protests.

The Saints also called Wells’ actions “unfortunate and disappointing,” and “sad and divisive.” In reality, the Saints players are disappointing many of their fans and being divisive by allowing these protests to continue. The team is coddling spoiled stars who are paid millions of dollars to play a game. These stars are not the victims of discrimination and most of them are clueless as to why they are even protesting. According to Saints safety Kenny Vaccaro, the players are bringing “awareness to a cause.” What cause is that, Kenny, communism or police hatred?

The protests have no place during the Saints pregame ceremonies. This is a time for both players and fans to show respect for America, sing the National Anthem, honor our military and first responders, and not engage in political statements. If players want to protest alleged social injustice, they should do it during their free time, not during games that hard working fans pay big money to attend.

The NFL owners should have taken a firm stand against these protests at their last meeting. Instead, they took no action and Commissioner Roger Goodell issued a weak statement expressing his desire that players stand for the National Anthem. Unfortunately, it was not backed by any threats of disciplinary action so it was meaningless. According to Commander Wells, “Their (NFL) failure to act is a slap in the face to all of those who have served in uniform. Men and women have fought and died for the flag that the players are disrespecting.”

Bravo Commander Wells, you are speaking for millions of Americans who are offended by these demonstrations. Until the NFL gets the message and stops the player protests, the once popular league will continue to self-destruct.