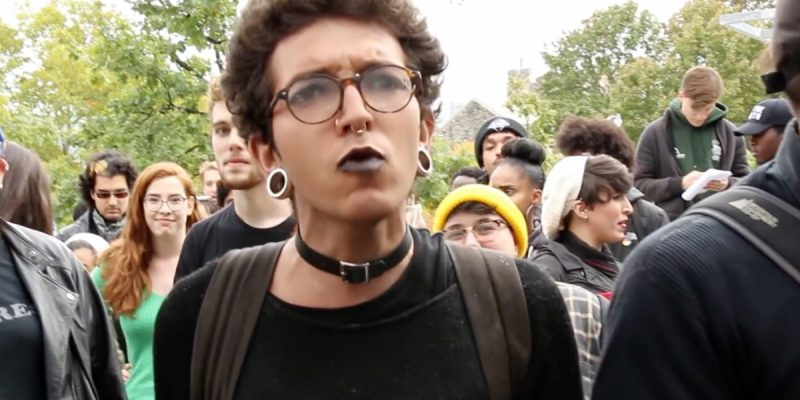 We loved this so much we had to pass it along even though it’s not exactly safe for work at the end. We think our readers will understand, and appreciate the F-bomb from the poor put-upon social justice snowflake warrior for the surrender that it is. 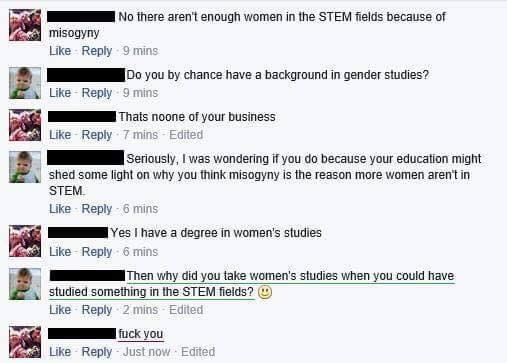 The entire debate about women in math, science, engineering and related fields more or less boils down to this conversation.

Should there be more women in STEM jobs? Yeah. Sure. Maybe.

The answer to the question depends on a number of factors – the true state of which we can’t answer and neither can the social justice crowd.

First, how many women want STEM jobs? Is there a large population of budding female engineers who can’t find work?

Second, how many of those women are qualified to hold a job in a math/science-related field? Most of those jobs require a related degree – you can’t major in psychology or social work or English Lit and then just get hired at the Jet Propulsion Lab or Transocean as an engineer. If women aren’t majoring in those subjects in college, they’re not very likely to work in those fields.

Third, is the contention that “misogyny” is holding women back from working in those fields valid? That would seem difficult to prove. Girls have to take math and science classes in primary and secondary school just like boys do, and colleges seem to put no small amount of emphasis on trying to attract women to major in STEM subjects. Employers seem to be actively looking for women engineers and mathematicians as well. If there is “misogyny” somewhere in the chain, we’d like to see it.

That the snowflake in the conversation above admits to majoring in Women’s Studies is a pretty good indication of where this whole discussion comes from. She – we’re assuming this is a she – has been educated (indoctrinated?) to see discrimination and oppression everywhere and to ascribe whatever condition she sees as unfavorable toward women to that oppression.

That’s what you learn in Women’s Studies, or just about any college curriculum that ends in -studies. Those curricula are the study of how the group in question – African Americans, women, gays and lesbians, transgenders, Chicanos and so on – has been oppressed by the white cisgender patriarchy in control of Western Civilization, and how to make the patriarchy pay.

The rest of the world is coming around to the realization all this is nonsense, largely because arguments with these people are as easy to win as the one above was. The fact is there is no oppression along the lines and to the extent the social justice snowflake warriors insist, and the “industry” they work in is made up out of thin air.

Sure, an engineering firm is going to be male-dominated. The vast majority of people interested in being engineers are men. That’s largely because engineering is painstaking, meticulous, time-sucking, demanding work which requires an intensive amount of cold mathematical logic, and that kind of work appeals much more to the typical male personality than it does to the female.

Which you can’t say around the snowflakes, because they can’t accept that men and women might be built differently. To them that’s merely a social construct built by the patriarchy.

But of course they don’t actually know anything about any of this. The Women’s Studies major above has almost assuredly never spent time working at an engineering firm or an IT department or a petrochemical plant and hasn’t the faintest idea how to do the work that’s done in any of those places. All she has is a hammer, and the STEM “problem” – like all the others – looks like a nail. It’s “misogyny” and oppression which is why there aren’t more women in STEM fields. It’s not the 18-hour days trying to meet deadlines, it’s not the stress, it’s not the impossibility of managing a household or a family under the working conditions those jobs require, it’s not the specialized skills which reward none of the relative strengths females possess. No, it’s the “misogyny.”

And here’s the nub of this – the vast majority of the people with Women’s Studies degrees have them precisely because they couldn’t cut it in STEM subjects even if they wanted to. To succeed in math and science you have to be able to put away your feelings and practice within the realm of reality. You have to be able to understand and analyze complex systems with measurable data, and to do so dispassionately, and with logic.

The F-bomb at the end of the conversation above is all you need to know. Our Women’s Studies major lacks the mental skill for a STEM job, and unwittingly admits it. An engineer would be prepared for that question and could give a reasoned answer, because an engineer would be trained to use logic.

We don’t just need more women in STEM jobs. We need more people in STEM jobs. And we need a whole lot less snowflake warriors with degrees in Women’s and Chicano and Gay and Lesbian Studies.