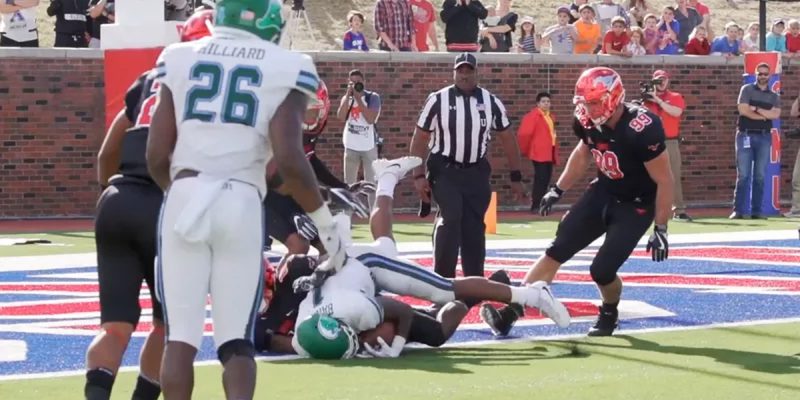 Tulane finished its season 5-7 on Saturday, coming just short of a big upset of SMU in the finale. The final score was 41-38 in favor of the Mustangs, and the Green Wave was nearing the goal line as time ran out.

When we say “just short,” we aren’t kidding. Here was the game’s final play…

All weekend long the internet has been full of Tulane fans screaming about how the officials screwed Tulane quarterback Johnathan Banks out of a touchdown. Obviously it’s an extremely close play, so it’s quite understandable.

Banks didn’t quite score. His helmet and his hand under the football hit the ground short of the goal line before he could roll into the end zone.

It’s a really tough break for Tulane. Head coach Willie Fritz has done a solid job bringing the Green Wave back to competitiveness after years of doormat status, and the Green Wave gave a good account of themselves this year even in their losses – two points to Navy, six points to South Florida, one point to Cincinnati – and pulled off a big November win over Houston this year. The SMU loss kept Fritz from having his team bowl-eligible and emerging as a rising power in the American Athletic Conference’s West division.

SMU head coach Chad Morris is a relatively hot name in coaching circles and it’s expected he may be moving up to a bigger job – he’s being discussed for the vacancies at Texas A&M and Arkansas, to name two examples. If Morris goes, as division champ Memphis’ head coach Mike Norvell is also supposed to, then Fritz might well be the next hot name to surface in next year’s coaching carousel.

And that’s worth betting on. Fritz has Tulane on a positive trajectory – he took over a team which had been 3-9 in both 2014 and 2015, and improved them to 4-8 last year before going 5-7 this year. Tulane is set to return virtually everybody on offense save for tailbacks Dontrell Hilliard and Sherman Badie, and about half the team’s defense will be back. It’s a formula which suggests a potential breakout season next year.

In the meantime, though, there is the familiar heartbreak Tulane football fans are accustomed to. Banks was close, but just not close enough.

Interested in more news from Louisiana? We've got you covered! See More Louisiana News
Previous Article Together Baton Rouge Is Working To Inflict The NOPD’s Troubles On The BRPD
Next Article Wait – We Have ANOTHER Serial Killer In Baton Rouge?