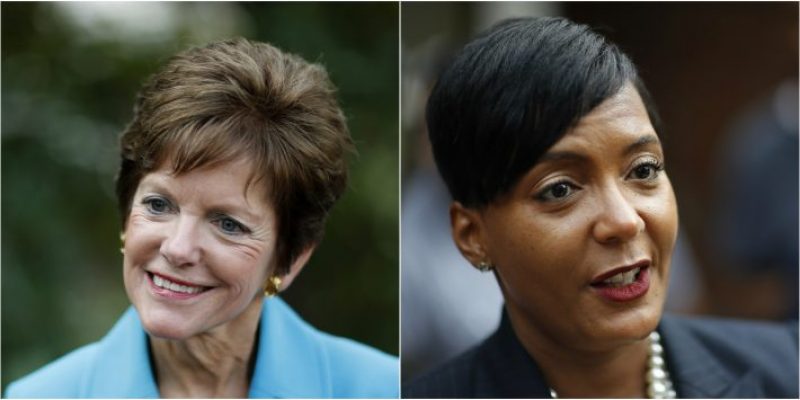 While most eyes were on Virginia last night, the Atlanta mayor’s race pared down the field to two candidates last night and it’s going to get ugly.

Quick rundown: There were 12 candidates vying to replace Mayor Kasim Reed, a moderately popular mayor despite currently being under federal investigation on corruption charges at City Hall.

Reed endorsed Keisha Lance Bottoms in the race and actively excoriated Caesar Mitchell, the former Atlanta Council President who was running for mayor, and a few other people. For the most part, these two have been the main figures in the race.

There was also sideshow appeal in Vincent Fort, a longtime state senator who kissed the ring of Bernie Sanders and got tons of out-of-state donations and endorsements from the far-left. Local politics matter in Atlanta, though, and Fort never stood a chance despite being on the front page of every socialist rag as the guy ushering in the Bernie revolution. He was absolutely demolished in the primary last night.

And then there’s Mary Norwood, a former Atlanta council president who’s relatively well-liked and has been in the game for a long time. Norwood has the unpardonable sin of being white, however, and a lot of analysts didn’t see her as having a chance.

From what I see this morning, Lance Bottoms and Norwood made the runoff with 26% and 21% of the vote respectively.

Norwood is a registered Independent, and although she’s not conservative she’s probably the closest you can get in Atlanta mayoral politics. Normally there wouldn’t be a chance in hell for her to win mayor, but with Kasim Reed’s endorsement Lance Bottoms is the establishment candidate, and Atlanta voters are sick of the establishment and the corruption that comes along with it.

We’ve already seen some heat before the runoff. The Democratic Party of Georgia has been spending tons of money to argue that Norwood is a Republican, which is a big no-no.

The Democratic Party of Georgia on Thursday launched a full-scale online attack against Norwood, labeling “Mary the Republican” as a far-right conservative who has a web of connections to GOP figures.

“Atlanta has had a Democratic mayor since 1881, and we’re not about to let Mary Norwood and the Republican Party steal that office,” said Michael Smith, the party’s spokesman. “Mary Norwood is funded by the GOP, and then she turns around and hands the money right back to Georgia’s far-right element.”

More importantly, Lance Bottoms’ campaign has already shown they’re not afraid to make this election hinge on what they really care about.

In the crowded race for mayor of the city if Atlanta, most candidates have focused on trying to generate name recognition. As the top candidates began to emerge, the claws came out. But not necessarily from the candidates themselves.

Some Atlanta residents recently received a “robo call” claiming to be from a group called “Citizens for Keisha.” The group appears on the surface to have a racist message against white candidates.

The robo call says, “Keep Atlanta black. Vote Keisha Lance Bottoms. A vote for Ceasar Mitchell is a wasted vote. Only Keisha can stop a white takeover of city hall.”

Lance Bottoms has emphatically denied putting out that robocall, but it shows what Atlanta voters are really thinking and what her campaign really wants to talk about. As tired as Atlanta people are of local politics, they may just vote for Norwood if she puts up enough of a fight.

Until December, we’re going to be seeing a racially charged campaign that will bring out the Democrats’ true selves as race hustlers. My guess is a lot of people in Atlanta regardless of race are going to be upset with the blatancy of it.