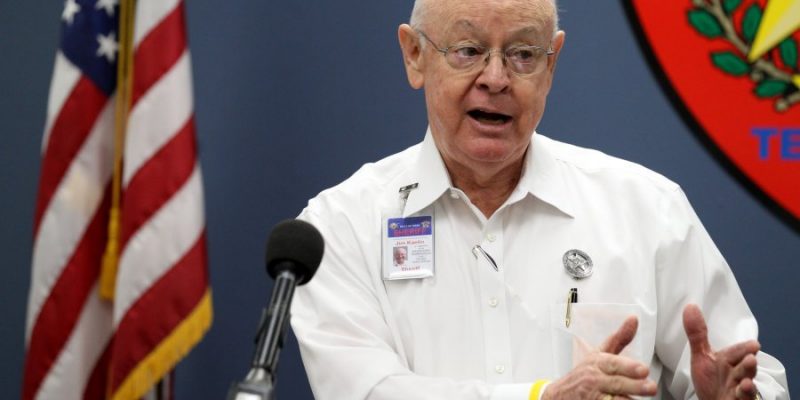 In the wake of sexual harassment scandals popping up in politics and media all over the country, a Texas sheriff is enforcing a strict no-hugging policy.

Nueces County Sheriff’s Office Sheriff Jim Kaelin said in a FaceBook post that his hugging days are over, and will only offer handshakes and knuckle bumps as a show of intimacy.

A sheriff in Texas has decided that he will no longer hug any of his colleagues due to the recent sexual assault and harassment allegations targeting Hollywood producers and politicians.

Jim Kaelin, the sheriff of Nueces County Sheriff’s Office, said he will only offer handshakes and knuckle bumps because “you just don’t know when this hug might come back and bite you.”

“My hugging days (outside family and or close friends) are over. The workplace, for one, can become hostile if an employee ‘feels’ threatened by your hugs,” Kalin wrote in a Facebook post. “SO IT’S OVER.”

“It might offend you that I will no longer participate in hugging you, but I have decided to discontinue receiving/giving hugs from anyone outside of my family and close friends,” he added. “I hope you understand. Thanks … I’m from the old school but the time has come for me … No more hugs.”

Many people commented on Kaelin’s post sympathizing with him saying they understood why he made his decision.

During the past few weeks we’ve gotten an in-depth look at how monstrous people in power in this country can be, but few solutions to how to stop it. If anybody should get a Person of the Year award for 2017, it should be Vice-President Mike Pence, who was ridiculed earlier this year for saying that he doesn’t dine alone with women out of respect for his wife.

Pence’s belief was mocked mercilessly by the left, with some people saying that if Pence couldn’t control himself around women when he’s alone, he shouldn’t be VP.

That of course completely misses the point. Not only does his idea thwart any temptation, it also puts to a halt any chance of a bogus sexual assault claim from popping up. Years ago that might have been considered a gentleman’s rule.

Kaelin is following in the same line of thought, and is taking seriously the current climate and other people’s definitions of harassment. I’m not so sure it should be a blanket rule for all public officials. This is the South, after all, and public displays of affection between friends are quite common and seen as harmless.

The more we wade through these scandals, it’s becoming clearer that the old-fashioned rules that were in place for earlier generations were there for a reason. The commodification of sex and lack of a moral compass for our culture has thrown those rules out, and we can see the results.

To my FB friends let me say this to you…my hugging days (outside family and or close friends) are over. Sad, but you…