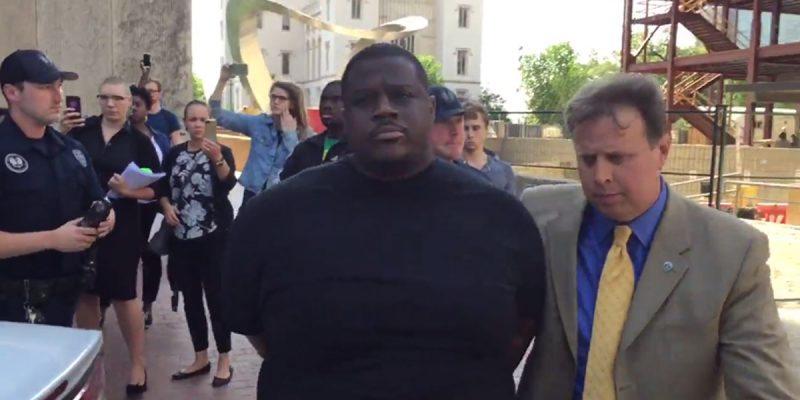 …the city of Baton Rouge. For what? For racism, of course. You had to ask? It’s Gary Chambers, for crying out loud.

Three people removed from a May Metro Council meeting have sued the city of Baton Rouge and Mayor Pro Tem Scott Wilson, who they contend violated their first amendment rights.

Gary Chambers, Mike McClanahan and Eugene Collins filed suit in the U.S. District Court in Baton Rouge Monday morning over events related to the May 10 Metro Council meeting. When the council opened the floor for public comments on items concerning sewer backups, the three approached the podium to talk about the death of Alton Sterling, who was fatally shot by Baton Rouge police last year.

Wilson had the sergeant at arms remove six people, saying they had to speak on the topic at hand. In their suit, the plaintiffs contended that “the Baton Rouge government should not return to business-as-usual without first resolving how to respond to the killing of a member of the community by BRPD officers.”

The suit argues that speakers at other meetings have been afforded the opportunity to wander off-topic without reprisal. The plaintiffs, who are black, view their removal as an attempt to silence them based on their race.

“Scott Wilson is part of a long history of Baton Rouge’s government suppressing the voices of its Black citizens. … Defendants discriminated against the content and viewpoint of Plaintiffs’ speech by having Plaintiffs removed from the Metro Council chambers before their public comment time was up,” the suit states.

Mike McClanahan is the head of the local NAACP chapter in Baton Rouge. He’s a lawyer who got himself in trouble for screwing his boss, his clients and a doctor he had a fee arrangement with out of money, but his defense to all that was he was hooked on dope at the time. How does one regain respectability after such bad behavior? By becoming an Avenger For Racial Justice, that’s how. Taking on such serious subjects as whether Mike Erwin might have popped off in an unwarranted fashion to a black woman who stole a fellow Sammy’s patron’s barstool.

So you show up at the Baton Rouge Metro Council and you rant and rave about Alton Sterling when they’re trying to figure out how best to handle the public sewers, so that the people’s business gets horribly delayed, and when you are tossed out of the meeting for violating the rules about subject matter to be spoken about at that venue you file a lawsuit saying it’s because you’re black.

Because you certainly can get attention that way. And if your McClanahan or Gary Chambers it never occurs to you that you want to do something productive as a means of getting attention. They wouldn’t know how to do that even if they had such an inclination.

In the meantime, the pressure just builds and builds in front of the inevitable reprise of the St. George movement. Can you not feel it in the air?