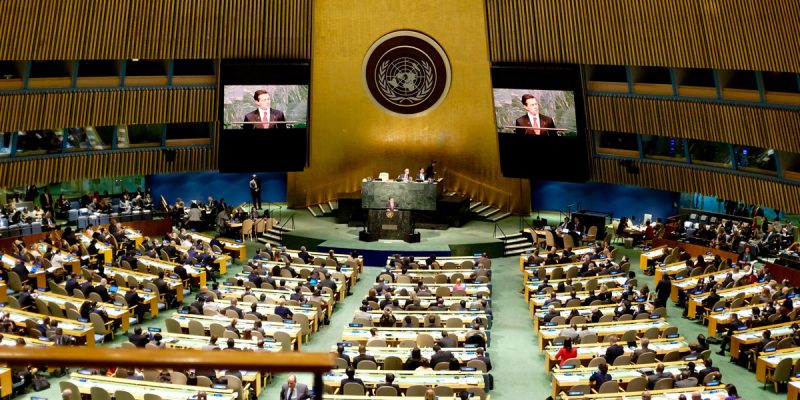 Since 1946, the headquarters of the United Nations has been in United States, with the official headquarters opening in New York City in 1952.

For decades, the United States has been a very hospitable host to this ungrateful, hateful collection of diplomats. By 2014, these international visitors had amassed over $16 million in unpaid parking tickets. For these diplomats, the laws of the United States are an afterthought and a mere inconvenience.

Even worse, the members of the General Assembly regularly pass resolutions that are both anti-American and anti-Israeli. The latest outrage occurred this week as 128 nations in the General Assembly voted to condemn President Trump’s courageous decision to formally recognize Jerusalem as the capital of Israel and move our embassy to this historic home of the Jewish people.

This move was an internal decision which should have been of no interest to the United Nations. Our country should be able to move our embassy to whatever city suits our purposes without international comment and certainly without vicious condemnation.

All the President did was to follow through on his campaign promise, which was the same promise made by Presidents Bill Clinton, George W. Bush and Barack Obama. Unlike the other Presidents, Donald Trump lived up to his commitment to the people of the United States and Israel. The President was not only keeping his word, he was also following a U.S. law that has been on the books for decades.

Not surprisingly, the condemnation vote by the United Nations did not please President Trump. He threatened to withhold foreign aid to any country that voted to censure the United States. President Trump said, “Let them vote against us. We’ll save a lot. We don’t care. But this isn’t like it used to be where they could vote against you and then you pay them hundreds of millions of dollars. We’re not going to be taken advantage of any longer.”

Currently, the United States spends approximately $50 billion per year on foreign aid. With 128 countries voting to support the resolution denouncing America, taxpayers will be saving billions of dollars in foreign aid if the President follows through on this threat. Polls shows that Americans believe the amount of money our country spends on foreign aid should be reduced, so, if the President acts, he will have the nation’s support.

Sadly, our close allies such as France and the United Kingdom voted for the resolution. These countries are heavily influenced by powerful Islamic nations such as Turkey, which engineered this resolution. It is very sobering to realize that an Islamic regime such as Turkey is a member of NATO and supposedly an ally of the United States. In reality, Turkey, and many other countries in the Middle East, are opposed to our values and our national security goals.

The President also tweeted that in the past few years, the country has “foolishly spent $7 trillion in the Middle East, it is time to start rebuilding our country!” He noted that “Infrastructure would be a perfect place to start,” and that he would accomplish this goal by reaching out to “Democrats in a Bipartisan fashion.”

Instead of wasting money on the United Nations or giving foreign aid to countries that regularly vote against our interests, our federal government can use those funds for much more important projects. As the President has repeatedly stated, we have crumbling infrastructure all over the country that needs repair. From our levees to our bridges to our airports, a massive investment is required. While $50 billion is nowhere near enough money, it would be a great start toward fulfilling an incredible need for our country.

Unfortunately, the United Nations is heavily influenced by socialist and radical Islamic regimes. Clearly, American taxpayers are not getting their money’s worth for this overly generous investment. We should not be funding an organization that is not aligned with our country’s interests or values.

Hopefully, President Trump will restructure our foreign aid program. Let’s reward those countries that support our goals and our values and punish those who do not. Regarding the United Nations, it is past time to say goodbye and good riddance to this organization.

At the very least, the Trump administration should significantly cut our contribution to the United Nations. This will not only give the President more funds to use on rebuilding our infrastructure, but, it will also a strong message to friends and foes alike that, unlike previous Presidents, Donald Trump is putting the interests of the United States of America first.

Interested in more national news? We've got you covered! See More National News
Previous Article No Jesus for Pennsylvania Family … Christmas Censorship in Gettysburg of All Places
Next Article WAGUESPACK: A Time And Place For Everything