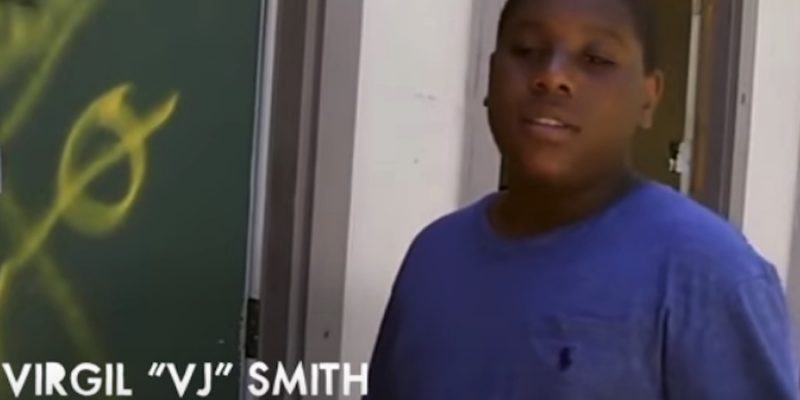 Thirteen-year-old Virgil “VJ” Smith of Dickinson, Texas, saved 17 people during the raging storm of Hurricane Harvey– by himself. He went out into the darkness of blinding wind and rain, using an air mattress to rescue his stranded neighbors from the flood waters that were destroying their homes.

His neighbors couldn’t swim. A woman in a wheelchair was stranded. Virgil said that he heard people screaming and that he had to do something. So he did. He got an air mattress and swam out to the windows of people’s homes, got them on it, and brought them to safety. Seventeen times.

Virgil didn’t risk his life for any motive other than to help his neighbors and friends. And, he went back to school acting as if everything was normal. He didn’t brag about saving people’s lives, or even the fact that he risked his own. In fact, most people had no idea that he had done something so remarkable.

But his football coach, teachers, teammates and classmates decided to give him a standing ovation, in keeping with the theme of the new film, Wonder. (The main character in the movie says, “everybody needs a standing ovation at least once in their lives.”)

Not only did he receive a standing ovation, but his example has been pointed to for others, both children and adults alike, to choose kindness. The teachers of Hitchcock Middle School reached out to the producers of the film Wonder. Wonder responded by giving Virgil an Auggie Award, which provided scholarship money to his school and made a donation in his name to the Harvey relief efforts.

How will you #ChooseKind this holiday season?