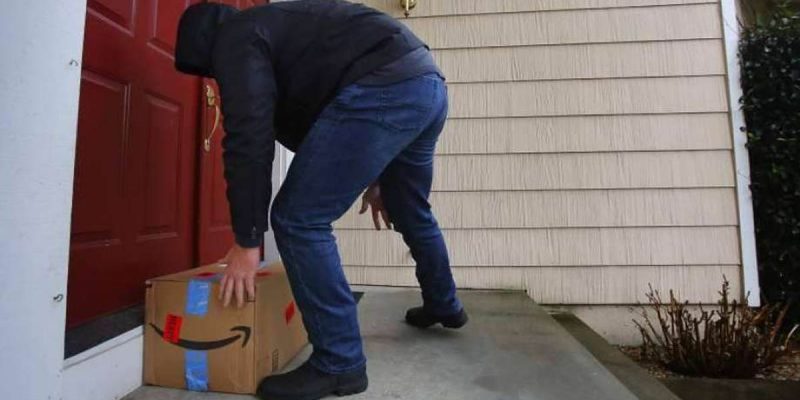 If you’ve watched local news at all in the last month you’re likely aware of the phenomenon of “porch pirates,” the lowlife scum who steal UPS and FedEx packages left on porches by delivery drivers. It appears the legions of these petty criminals have grown out of control this year, which is especially evident during the Christmas season.

Not to mention with Amazon and other online shopping venues cutting an ever-larger slice of the retail market, porch pirates will only become a larger and larger problem. Stories like this are going to become more prevalent…

SEATTLE — It is a season for giving and, according to law enforcement officials in Washington County, Ore., taking as well.

Two weeks ago, its Sheriff’s Office ran a sting operation to catch porch pirates, thieves who swipe packages from Amazon and other companies from doorsteps. Detectives from the department’s property crimes unit put several electronics items worth more than $500 in a box, dropped in a tracking device and “baited” a volunteer’s front porch in the town of Aloha.

Sure enough, a pirate struck just after 2 a.m., and deputies traced him to a home two blocks away. In an apparent effort to cover up his deed, the 27-year-old suspect microwaved the tracking device, so he was charged with evidence tampering in addition to theft.

Porch pirates have darkened people’s doorsteps for years. Law enforcement agencies say they think the crime is on the rise, along with the growth of online shopping. “There’s more packages for them to grab,” said Angela Sands, a spokeswoman for the Police Department in Lincoln, Neb.

And the rewards are especially attractive during the holiday season. United Parcel Service plans to deliver 750 million packages this season, up from 500 million five years ago.

…until something is done to make porch piracy untenable.

We like this lady’s idea, but let’s face it – this won’t stop the porch pirates. It’ll probably just piss them off and make them more determined.

Cat-poo bombs don’t quite solve the problem, but the general idea is a good one. What’s needed is a more aggressive solution.

Here’s how the police are handling the porch pirates…

Let’s all get hot and bothered about the cops putting high-value merchandise in those bait packages so as to ensnare the porch pirates in trumped-up felony charges. Anyone really think that’s an abuse of law enforcement? Really?

We like the application of the Castle Doctrine to the packages on the porch. Getting shot in the back by the homeowner whose property you invaded to steal his movables isn’t a bad outcome for anybody but the thief as far as we’re concerned.

The question is whether booby-trapping – or poopy-trapping – a bait box will engender negative legal consequences on the vigilantes doing battle with the porch pirates. Certainly it’s possible to go too far in a noble cause.

Not that these guys did…

He didn’t really run the scumbag over. It was an accident. Everybody agrees. What’s your problem?

And lastly, here’s a guy who’s figured out how to make a profit scaring the hell out of the porch pirates. Call him a war profiteer, if you want.

We can’t wait for Blank Box Deluxe, which perhaps incorporates dye packs like banks use to foil robbers, to make its debut. Nothing would be better than to see blue-dyed faces of would-be porch pirates on those home security cameras – after all, that’s just citizens aiding the police, right?