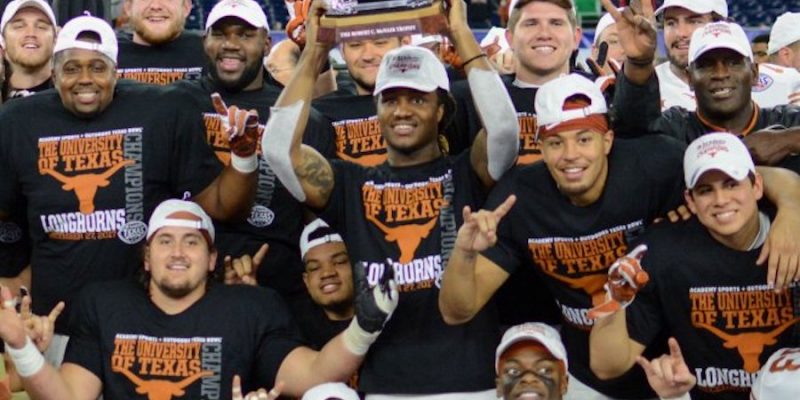 Big 12 Texas took on SEC Missouri at the 2017 Texas Bowl in Houston last night and despite the odds against them, the Texas Longhorns crushed the Missouri Tigers 33-16. The win delivered Texas its first winning season in four years.

You can’t overstate it. It’s really important for these guys to call themselves a winner… Again, it wasn’t gonna be life or death. We would’ve been just fine next year, but this was a big step forward.

The Longhorns win was symbolic for a city still struggling to recover from the widespread destruction of Hurricane Harvey. The team went into the game with a depleted roster; ten players who had started during the 2017 season could not play in the Texas Bowl either due to injury or suspension.

Here’s a recap of the game. In the first quarter the Longhorns scored a touchdown and by halftime had a 21-7 lead. Then Texas gained two points after a bad snap that became a safety. The Daily Texan reported:

Missouri’s offense, which ranked top-10 nationally in scoring and total offense entering the game, was shut down for most of the first half. The Tigers didn’t cross midfield until early in the second quarter. But on that drive, Missouri quarterback Drew Lock and the offense finally found some life. Running back Ish Witter scored from four yards out, and the Texas lead was cut to 14-7.

But right when Missouri appeared ready to find its footing in the game, Witter coughed up the ball after junior defensive back P.J. Locke III knocked it loose midway through the second quarter. Junior linebacker Anthony Wheeler scooped it up and returned it 38 yards the other direction for a touchdown, delivering a mean stiff-arm to a Missouri tackler along the way.

By the third quarter, Texas was leading, 23-16. In the fourth quarter, with two minutes to go, Armanti Foreman ran 18 yards, pushing Texas to a score of double, 33-16.

Their win helped boost morale in Houston. How did they do it? By focusing on having fun.

Before the game even started the Longhorns’ head coach, Tom Herman, posted a video online that went viral. He announced the team’s arrival to NRG Stadium in Houston with video of them walking in to the song, “Stir Fry,” by Migros.

Reports reveal that Herman’s focus for the team was to have fun– to enjoy the game– and they did. Enough to win– and beat the tremendous odds against them.

According to Las Vegas Texas Bowl odds predictions, Missouri was favored by 2.5 over Texas with an over/under of 60.5. In other words, the Texas win was a major upset.

After the game, Texas junior defensive end Breckyn Hager said, “I think tonight, Coach Herman won the locker room. 100 percent. Hearts out. He now has our hearts as a team.”

The Texas Bowl (the Academy Sports + Outdoors Texas Bowl) is a post-season NCAA-sanctioned Division I FBS college football bowl game. The first game was held in 2006 in Houston, Texas.

Interested in more news from Texas? We've got you covered! See More Texas News
Previous Article We Need A National Discussion Of What To Do About Porch Pirates
Next Article WAGUESPACK: How About Some 2018 New Year’s Resolutions?