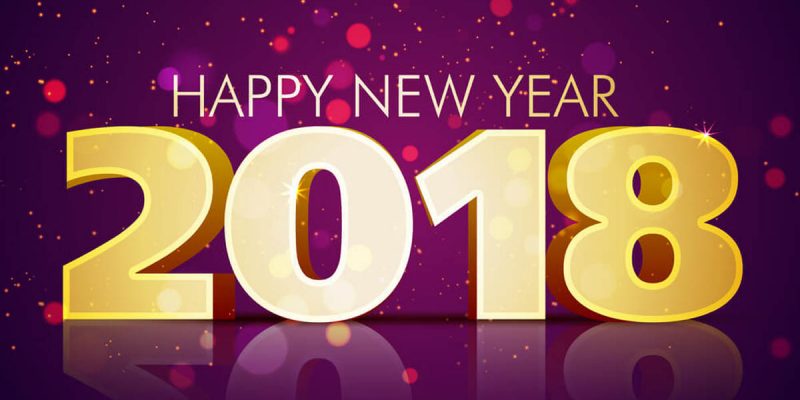 Ah yes, it is that time of year again where we all end up giving ourselves “the talk.” You know the one I am referencing… that tough talk where we make new year resolutions, either publically or privately, to do things a little bit better starting January 1st.

Eat too much and exercise too little over the holidays? No worries, that will all change in 2018. Need to go to church more? That spiritual “you” is patiently waiting to shine starting next Sunday. Need to call mom more… floss every night… volunteer in the community… be a better spouse? Next week is your big chance to start that new trend.

Benjamin Franklin once said, “Be at war with your vices, at peace with your neighbors, and let every new year find you a better man.”

So how do you plan to be a better man or woman in 2018? The truth is we all could use a little work.

None of us are perfect (even though our Facebook photo stream may try to make us appear that way), and we all have things in which to improve upon. To my knowledge, there has only been one perfect person to ever walk this planet… and though we last celebrated his birthday just a few short days ago he has been (physically) gone for a couple of thousand years.

The annual question this time of year is whether we have the guts to confront our largest shortcomings and truly resolve to tackle them with a vengeance… or instead just focus on inconsequential fixes to minor issues and just pretend we are trying to fundamentally better ourselves.

This metaphorical crossroads of kicking the can down the road versus grabbing the bull by the horns and actually following through on our resolutions is one we personally face each New Year’s Eve… and one we as a society seem to be increasingly facing daily regarding restoring faith in government.

Polls show that a large percentage of voters have lost faith in governmental systems and elected officials regardless of political party. This growing distrust is leading to rampant disgust and a toxic mix of apathy and intolerance that does not serve our republic well. This downward trend must stop, and 2018 is the perfect time to begin. So, in that vein, let’s get to some tough resolutions.

Conservatives need to resolve to focus more on solutions that work for everyone, not just sound bites that speak to a chosen few. If conservativism continues to be more defined by what it stands against as compared to what it stands for, the movement will never be capable of sustained electability and solution-oriented governance.

Liberals need to resolve to stop thinking government programs can solve all problems, and more money is an acceptable answer to every question.  Unreformed government functions at the state and federal level will bankrupt us all if we are not careful and scaring “the-you-know-what” out of the poor and elderly every time a sensible solution is offered is irresponsible and immoral.

The President needs to resolve to chill out with his twitter feed. His first year in office could easily be an impressive storyline about economic vitality, unemployment declines, stock market gains, tax reform and regulatory reform… however, the lack of civility and decorum on social media and other media outlets has clouded much of that successful narrative. Speaking of media…

The media needs to resolve to call balls and strikes more fairly. The election cycle of 2016 and the daily coverage of 2017 has left many convinced that a large chunk of the media coverage is left-leaning. Whether fair or not, this trend is just as undeniable as it is alarming. While natural for reporters and commentators to have strong personal views, it is also natural for large pockets of readers/listeners/viewers to tune them out as partisan ideology if those personal views begin to taint the coverage. The judgment is in the eye of the beholder, and a growing number of consumers are tuning out. The relevancy of journalism as an industry is at stake on this resolution for fairness taking hold. No pressure.

In Louisiana, the Governor and Legislature need to resolve to better work together for a sensible solution. The House of Representatives wants to reduce government, the Governor wants to increase it and the Senate wants to hop on pretty much any agreement made between the two. Sitting down at the table to negotiate is not a sign of weakness and does not obligate you to any final solution. Start the conversation and see where it goes. Whatever the outcome, be specific and clear to voters with the facts.

We in the business community must resolve to do our part to help find a sensible solution to the state’s fiscal challenges. This must include getting out of our comfort zone to seek tough solutions to complicated issues by working, where appropriate, with unconventional partners. Holistic reforms to Louisiana’s educational, pension, Medicaid, correctional, legal and tax systems must take place and compromise is the only way to make it happen.

This year, before rushing to pick New Year’s resolutions based on some temporary emotion, take some time to reflect on what really needs to be resolved to make things better… and then develop a clear plan to tackle it head-on. Doing so will be tougher than past years, but it just might make those 2019 resolutions a whole lot easier next year.