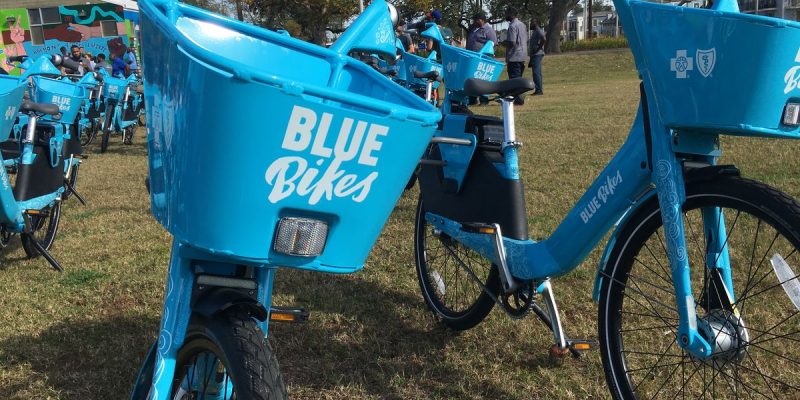 New Orleans, ever the slave to municipal trends under the tutelage of Mayor Landrieu, has joined countless other cities across the country in indulging the hopeless boondoggle that is bike sharing.  As the Times-Picayune reported today:

Bicycle aficionados kicked off the start of New Orleans’ first bike-share program Tuesday morning (Dec. 5) during a celebration at the Lafitte Greenway. The program, called Blue Bikes, so far has for-rent bicycles parked at 15 locations clustered in downtown areas up to City Park.

The bikes, painted their namesake blue, run on $8 hourly ride rentals and $15 monthly passes. A discount $20 annual pass is available for residents who qualify for public assistance.

On Tuesday, Mayor Mitch Landrieu joined other cycling enthusiasts on a five-mile morning ride to mark the program’s official launch. At a post-ride news conference on Lafitte Greenway, Landrieu touted moves made during his administration to pump up the number of bicycle lanes in the city and bring the bike-share program to fruition.

“Blue Bikes is the kind of public transit that is going to help get our citizens to and from work,” Landrieu said. “This is the culmination of a dream that many of us have had for a long time.”

To take a bike for a spin, riders have to register on Blue Bikes’ website or mobile app to receive account and pin numbers. Entered into a keypad fixed to any bike, those numbers unlock a U-lock device that you store in a holster on the bike’s side while riding. The bikes can be deposited at any station in the city or to any public bike rack for a $1 fee. Rides are non-refundable.

Much to my chagrin, there’s one location right around the corner from my house, taking up several parking spaces.

Of course, the pitfalls of bike sharing should be obvious.  If you run the service as though it were public transit, thereby allowing people to use cash to pay a rental fee set at a heavily-subsidized level, then you can expect the bikes to disappear or be vandalized.  It’s the tragedy of the commons and all that; the bicycle equivalent of a public restroom.

This is what initially happened when Paris, France instituted bike sharing.  Over half the original 15,000 bikes had been stolen within the first 18 months of the program.  Some wound up at the bottom of the river Seine.

On the other hand, you can also do what New Orleans has done, and simply contract out the service to a private firm (here, Social Bicycles or “SoBi”) that pays all the costs.  However, the end result will not be a public good, but a private gamble.  SoBi requires people to use payment through an app or their website, so you can’t just put cash in a kiosk, and it sets the hourly rate at an excessively high level — $8 per hour plus $1 just to park.

With this type of program, it’s likely New Orleans will end up with poor ridership numbers and a program that is (realistically) only utilized by bourgie, hipster types and perhaps tourists.  The latter were already well-served by bike rental businesses throughout the city, and the former need neither the help nor the push to ride odd-looking bicycles.

The offer of a minimal annual fee for people on public assistance is a fig leaf; it forces them to jump through hoops to prove eligibility, and again, I’m unclear on how you can pay with cash through the app or SoBi’s website.    Also, it’s limited to a maximum of one hour per day.  After that, the poor pay the excessively-high hourly rate (and the parking fee always remains).

If you want to see how bike sharing initiatives play out, look no further than Seattle, which tore out its bike sharing stations earlier this year after the program was revealed to be a massive boondoggle.  Don’t expect New Orleans to fare any better.

Interested in more news from Louisiana? We've got you covered! See More Louisiana News
Previous Article CROUERE: Lying To FBI Is Illegal; How About The FBI Lying To Us?
Next Article BATISTE: Governing Authority Enriches New Orleans Restauranteur Group