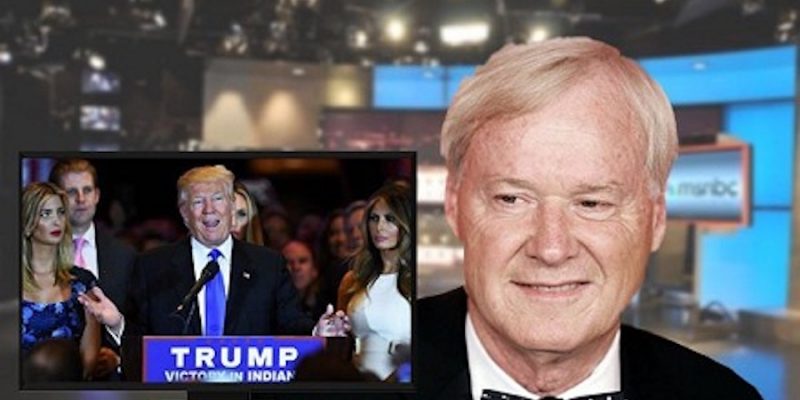 As if there needs to be more evidence of MSNBC Hardball host Chris Matthews’ character, more videos just keep coming out of his sexist and degrading attitude towards women. The latest is from Variety.com, which documents one of his ogling diatribes almost one year ago to today. Variety reports:

During the network’s coverage of Donald Trump’s Indiana primary victory speech, MSNBC’s Chris Matthews was caught on a live microphone commenting on the appearance of Melania Trump, the Republican nominee’s wife.

“Did you see her walk? Runway walk. My God is that good,” Matthews said.

It appeared that the 70-year-old “Hardball” host wasn’t aware his comments were being broadcast. “I could watch that runway show,” he added.

Brian Williams, who was co-anchoring the coverage of Trump’s victory, quickly cut to a commercial break. MNSBC declined to comment to Variety about the incident.

Variety then goes on to list examples of his sexism, starting with this video:

@hardball_chris Matthews creeping on @MELANIATRUMP saying he could watch her walk all day. #dirtyoldman #openmic pic.twitter.com/wQ29lWuVbV

Variety lists seven examples of Matthews’ disrespectful and derogatory remarks about the appearnce and intelligence of Hillary Clinton, Erin Burnett, and Sarah Palin, solely because they are women.

The Daily Kos lists Matthews’ history of sexist comments made between 2005-2007, especially about Hillary Clinton (although not about her beauty.)

Interested in more national news? We've got you covered! See More National News
Previous Article One Graph Which Tells Everything You Need To Know About Why Louisiana Is Last…
Next Article Border Wall of … Sea Shells?