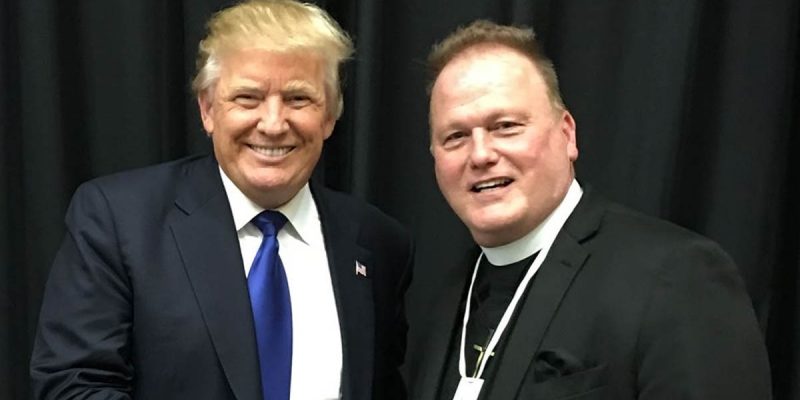 And this one involves a funeral.

A state representative in Kentucky shot and killed himself Wednesday evening, officials said — just days after a report emerged in which a woman said he sexually assaulted her when she was 17.

Rep. Dan Johnson, a preacher and a Republican, shot himself on a bridge in Mt. Washington, southeast of Louisville, Bullitt County Sheriff Donnie Tinnell told WDRB. His body turned up on a riverbank near the bridge and the weapon reportedly was found at the scene. He was 57.

Earlier Wednesday evening, WDRB said Johnson took to Facebook to post about the accusations leveled against him, claiming they were “false” and “only GOD knows the truth.”

On Monday, the Kentucky Center for Investigative Reporting published an account from a woman claiming that Johnson sexually assaulted her in the early morning hours of Jan. 1, 2013.

Johnson told reporters on Tuesday that the accusations were “totally false.” But leaders of the state Republican and Democratic parties had called for the representative to resign.

Our Louisiana readers might note something of a local connection, as Johnson was a native of Bastrop in the northeast corner of the state.

What to make of this? Well, it’s certainly the first time we know of that a public figure accused of sexual harassment and subsequently dragged through the mud has reacted so drastically to his travails. And while Johnson’s suicide will undoubtedly mark the Kentucky affiliate of NPR as irresponsible and tainted for having driven a man to shooting himself, it would set a bad precedent if the media were to be pursued legally for doing its job.

Still, maybe this might be a signal that it’s time to cool it with the screaming outrage every time someone gets accused of bad behavior. There are things which are unacceptable, to be sure, and there are certainly some horrible people out there. Most of us, even those of us in public life, don’t qualify as horrible – but none of us are angels. Everyone has character flaws which could lead to actions we could be publicly shamed for, and in this environment those actions might not be in reality all that terrible.

The accusation against Johnson was a fairly salacious one, essentially that he groped a teenage friend of his daughter during a New Year’s Eve sleepover the kids were having; Johnson was apparently very drunk at the time and there were Facebook messages between Johnson and his accuser which indicated that something untoward had happened, whether her characterization was accurate or not. That was the latest incident in a somewhat bumpy ride in public life; last year Johnson won re-election after being caught up in the outrage machine following his sharing on Facebook of a picture depicting Barack and Michelle Obama as apes, and back in 1987 he was indicted for complicity to create arson and filing a false police report over an incident involving a fire at his church. His public persona was one of a gun-totin’, God-fearin’ conservative patriot, and he held himself out as the “Pope” of a small evangelical church in Louisville. Despite his status as a controversial figure Johnson was relatively well liked in his legislative district – sources we talked to there say people generally would hear about his foibles and think “That’s just Dan.”

He probably wasn’t all that well suited to a career in politics. But now he’s dead thanks to a salacious hit job by a taxpayer-funded media organization (we make no judgement on whether that hit job was unwarranted; it may well be). Right or wrong, there will be a backlash against Louisville Public Media, the outfit publishing Monday’s expose.

Maybe the lesson is to tread somewhat lightly with such accusations. The Bible’s warning of “Judge not, lest ye be judged yourselves” isn’t just good religious advice.