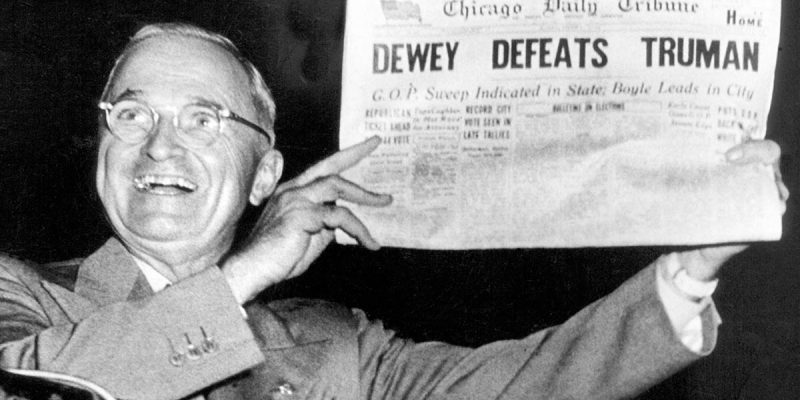 Headlines often set the tone and narrative for a reader before they ever devour any of the information in an article. Headlines can clearly summarize the contents and give the reader a quick taste of what’s in store. Unfortunately, they can also be confusing…misleading…or sometimes flat out wrong.

The most extreme American example of this happened on November 3, 1948. The banner headline of that morning’s Chicago Daily Tribune read, “Dewey Defeats Truman.” This headline signaled the fact that Republican challenger Thomas Dewey, then Governor of New York and the favorite to win that year’s presidential race, had defeated Democrat incumbent Harry S. Truman the night before. The only problem was that it wasn’t true. Truman pulled off the upset victory, and the rest is, as they say, history.

These days, it is quite rare for a headline to be that wrong. Evolution in printing machinery and technological editing practices have made those types of extreme mistakes easily caught and corrected. However, technology has not yet solved the general issue of headlines that can inadvertently give the wrong impression to the reader.

For example, the lead headline earlier this week in the business section of a prominent state paper was, “Sasol pulls plug, saving La. $200M.”

The article went on to describe how Sasol, a company who is currently investing $11.1 billion in Lake Charles to build an ethane cracker, has decided against also building a $13-$15 billion gas-to-liquids (GTL) facility due to global market conditions. That additional investment would have created 750 jobs with an average salary of $88,000.

This ethane cracker project currently being constructed in Lake Charles is an absolute game-changer for the state, a fact described in the second half of the article.

The article explains how 90 percent of the 6,000 construction workers on site are from Louisiana and that the permanent workforce has grown by “450 to nearly 1,000 people, paid an average of $80,000 per year.” The article goes on to describe that 1,500 entrepreneurs have gone through Sasol training to identify small business opportunities for the facility, an effort that “resulted in 43 new startups and helped create 163 new jobs.” Included in this number are $39 million in procurement contracts that have gone to minority and veteran-owned businesses. Once the construction process for the ethane cracker is complete, the facility will create “500 jobs paying an average of $80,000.”

The article confirms that this ethane cracker will be an enormous benefit for the region and state for years to come. This project is a big reason Lake Charles has been the largest jobs gainer in the state since October 2016, adding 4,700 jobs during that time, a 4.2 percent increase.

Which gets us back to that headline. With an article filled with documented information on the tremendous benefits to the state that come with an $11.1 billion investment like this, how can the headline say that losing an additional $13-$15 billion investment will save the state $200 million?

The answer is that some are confusing lost investment in the private sector as additional money for government.

For example, if the GTL would have been built, the value of the industrial tax exemption would have been more than $1.5 billion. Now that the project will not happen, that $1.5 billion doesn’t go to local government. Instead, it goes away entirely, most likely to another state or country. Same with the quality jobs incentive, which gives a six percent payroll rebate for up to ten years for investments like this. Do folks really think the long-term value to Louisiana of those permanent high paying jobs is less than a near-term incentive to bring them here?

Giving the impression that chasing away private sector jobs and investments is a direct way for the state to “save money” is not accurate. If it were, the sensible thing to do would be to go after the costliest exemptions the state offers and target them to “save” even more money for the state. Let’s try it out…

The costliest exemption in the state is the individual federal income tax deduction at $870 million. This allows Louisiana taxpayers to deduct their federal income tax payments from their state taxes. If Congress and the White House agree on a tax cut bill soon, this will go down.  Either way, it may be targeted for elimination altogether. Headline: “Taxpayers pay taxes on taxes, La. saves $870 million.”

The second costliest exemption in the state is the corporate subchapter S exemption at $504 million. This exemption basically prohibits double taxation, since these business entities already pay their taxes on their personal income filings. Eliminating this exemption for these businesses, many of which are small to mid-size businesses, is asking them to pay their taxes twice each year. Headline: “Small Businesses go bankrupt after paying same tax twice, La. saves $504 million.”

Next up is the prescriptions sales tax exemption at $359 million. If everyone could just toughen up and use old-fashioned remedies like leeches instead of modern medicine, imagine how much money the state could save. Headline: “Sick stop buying medicine, La. saves $359 million.”

Last on our list is the individual federal excess itemized deduction, the fifth highest exemption at $350 million. The state could easily save this money if folks would just stop paying their mortgage or giving to charities. Headline: “People become homeless and selfish, La. saves $350 million.”

Headlines don’t always tell the whole story, which is why it is important to dig for the details. The popular narrative these days is that exemptions and incentives are taking from government and that most of our state budget problems could be solved by removing their impact. If that is the case, the plan to solve government’s fiscal cliff seems easy. Stop recruiting new private sector investment and encourage existing employers to leave the state…stop buying food, prescriptions and homes…stop giving to charities. If folks would just follow these simple steps, the government would finally have all the money they need.

Yeah, right. If you believe that, you probably think Dewey defeated Truman back in 1948 because you vaguely remember seeing that headline somewhere…

Interested in more news from Louisiana? We've got you covered! See More Louisiana News
Previous Article LSU Is Going To The Citrus Bowl, But Not To Face Michigan State…
Next Article John Bel’s Wasteful LGBT Appeal Is Another Indication He’s Trying To Position Himself For 2020