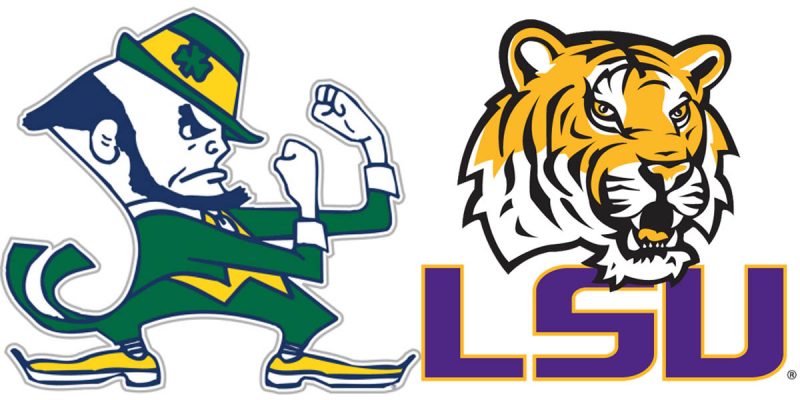 …instead it’ll be the Fighting Irish of Notre Dame as the Tigers’ opponent on Jan. 1 at noon for the Citrus in Orlando.

The Tigers and Fighting Irish are meeting in a bowl game for the fourth time. It started with the 1997 Independence Bowl which LSU won 27-9. The teams also played in the Sugar Bowl following the 2006 season with LSU and JaMarcus Russell defeated Notre Dame and Brady Quinn, 41-14.

Notre Dame got a bit of bowl revenge following the 2014 season when the Fighting Irish defeated the Tigers 31-28 in the Music City Bowl.

LSU also finished the year at 9-3 after winning six of its last seven games after starting 3-2 with losses to Mississippi State and Troy.

This was a make-or-break season for Brian Kelly at Notre Dame, after Kelly’s team went 4-8 last year. But the Irish were considerably improved this year, playing Georgia to within one point in the second week of the season and getting red hot in late September and October, with seven straight wins including impressive beatings of Boston College (49-20), Michigan State (38-18), USC (49-14) and NC State (35-14). But Notre Dame cooled off significantly in November; their Nov. 8 loss to Miami by a 41-8 score seemed to pop their bubble in a significant way. Following that blowout, Notre Dame struggled in a victory over Navy (24-17) and then took a 38-20 pasting at Stanford’s hands.

Notre Dame might be a bit of a challenging matchup for LSU’s defense, as the Irish are a quality running team. The Irish are a very-impressive 7th in the country in rushing at 279.1 yards per game, which means the Tigers’ run defense will be heavily tested. Notre Dame has a high-quality running back in Josh Adams, a 6-2, 225-pound bruiser who had his name in the Heisman race for a time this season as he rushed for 1,386 yards and an impressive 7.3 yard average. Adams’ nine TD’s weren’t the team lead, though, as quarterback Brandon Wimbush, who rushed for 756 yards and a 5.6 yard average, scored 14 touchdowns on the ground. As a team, Notre Dame averaged 6.4 yards per carry – which is a pretty astonishing number, and it isn’t just a product of an easy schedule. Notre Dame only had 55 yards on the ground in the Georgia game, but ran for a crazy 515 yards in the Boston College game, 182 against Michigan State, 377 against USC, 318 against NC State and even 154 in the Stanford loss. Miami did hold the Irish to 109 yards, though.

Stop Notre Dame’s run and you probably render their offense harmless. Wimbush isn’t a particularly dangerous passer; he’s only completing 49.8 percent of his passes, which is a terrible number. That said, he does have a good 16-6 TD-interception ratio, and he’ll beat a defense down the field; despite the low completion percentage he’s got a solid 6.8 yards-per-attempt number. That’s largely a function of the play action when Notre Dame establishes the run; Notre Dame’s best receiver Equanimeous St. Brown, who has 31 catches on the year, has a 15-yard average and two of their other top four receivers are averaging 18 yards per catch. All told, Notre Dame averages 454.9 yards a game of total offense and they’re scoring at an impressive 35.3 point-a-game clip. They’re capable of wrecking a defense with that running game and then sneaking receivers behind single coverage for chunk plays via the air.

Defensively, Notre Dame isn’t quite as dominating. They’re giving up 21.8 points a game, which is a respectable number, and they allow a so-so 366.7 yards per game. Notre Dame’s run defense allows 153.2 yards per game, a number which includes some great performances (Temple had just 85 rush yards, North Carolina had 86, USC just 76, NC State only 50) and some not-so-great performances (Georgia rushed for 185 yards, Boston College had the same, Michigan State had 151, Wake Forest ran for 239 while throwing for 348, Miami ran for 237, Navy for 277 and Stanford for 152). In the air, Notre Dame’s defense gives up 213.5 yards per game and a QB rating of 120, which is healthier than you’d like. Opponents complete 56.6 percent of their passes against the Irish and have a 21-10 TD-interception ratio.

In all, this is an interesting opponent and a dangerous one, and in Notre Dame LSU will see some bona fide NFL draft prospects – particularly 6-5, 329-pound guard Quenton Nelson and 6-7, 312-pound tackle Mike McGlinchey, both of whom could be first round picks. St. Brown is also likely a first-day pick; he’s a well-built 6-4 and 205 pounds at wide receiver. Adams should be drafted by the end of the third round, as should linebacker Te’Von Coney (6-1, 240), who had 99 tackles this year. Another likely high draft pick is defensive tackle and Shreveport native Jerry Tillery (6-7, 305), who has 37 tackles and three sacks.

In all, it’s a good Citrus Bowl matchup and one which should generate a lot of national attention. Orgeron didn’t quite get LSU into a New Year’s Six bowl in his first year, but he got pretty close – Notre Dame spent a big chunk of the season catching notices as a potential playoff participant, and LSU is, after all, going to be playing on New Year’s Day.