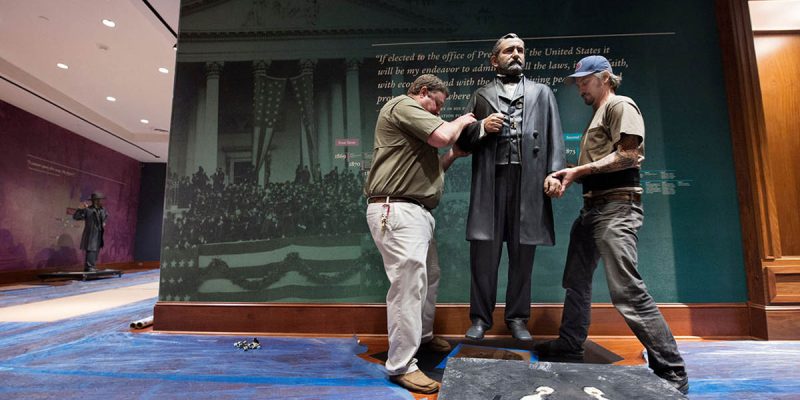 Mississippi surrendered its pride with the new Ulysses S. Grant Presidential Library.  On November 30, the Grant Library opened in Starkville on the campus of Mississippi State University.

It’s a $10 million, 21,000 square-foot facility that makes MSU one of only six universities in the country to host a Presidential Library. America’s newest Presidential Library offers the largest single collection of Grant papers and items in the world, contains 15,000 linear feet of correspondence, research notes, artifacts, photographs, scrapbooks and memorabilia, along with 4,000 published monographs.

“There was not another state in the nation that had more to do with propelling Grant’s career than the state of Mississippi. It was Grant’s success here in Mississippi that earned him the special gratitude and confidence of President Lincoln, and propelled him into a much larger, grander role in leading the army during the war. Afterwards, with his celebrity, it propelled him into being the president of the United States,” MSU President Mark Keenum, a native of Corinth, Mississippi, said. “It’s most appropriate, and fitting, for his library to be located in the great state of Mississippi.”

If Mississippi State is concerned about honoring its victorious opponents, perhaps the football field should be renamed for Ole Miss’ 20 game advantage in the Egg Bowl series.  “Ole Miss field at Davis Wade Stadium” would fit right in with Ulysses S. Grant library on Mississippi State’s campus.

Grant waged war on Mississippi for roughly six months.  He fought several battles including the capture of Jackson and Vicksburg.  When he went after Mississippi’s capitol city, Mississippians living in Jackson were protected by Confederate forces long enough for them to evacuate.  Grant then came into Jackson, burned part of the town, and destroyed factories. He went on to take Vicksburg with a siege that lasted six weeks.  Vicksburg finally surrendered on July 4th in 1863.  The people of Vicksburg refused to celebrate the Fourth of July for the following 81 years as it marked the capture of the city.

Vicksburg has 17,000 graves of Union and Confederate troops who died during the Vicksburg Campaign, deaths that are the result of Grant’s invasion of Mississippi. Grant conquered Mississippi.  He forced people to leave their homes.  He defined the War of Northern Aggression.

Grant was born in Ohio and lived in Illinois and New York.  His tactics in the War Between The States earned him the nickname “Butcher” as he strongly relied on his troop number advantage, waging a war of attrition to out last the South’s armies.  Grant’s armies inflicted 191,000 Confederate casualties.

While Robert E. Lee was widely regarded for his high character, Grant was noted for flaws beyond his lack of regard for Union troop lives.  Grant was said many times to be a heavy drinker and accused of being drunk at times during the war.  Grant was also anti-Semitic as noted in General Order No. 11 that he issued from Oxford, Mississippi, which reads:

“The Jews, as a class violating every regulation of trade established by the Treasury Department and also department orders, are hereby expelled from the Department [of Tennessee] within twenty-four hours from the receipt of this order.”

With the order issued from Oxford, Grant kicked Jews out of the states of Kentucky, Tennessee, and Mississippi under the threat of arrest.  He also described “the Israelites” as “an intolerable nuisance.”

Locating the Ulysses S. Grant Presidential Library in Mississippi would be tantamount to putting a monument to fiery Andrew Jackson on an Indian Reservation—it’s the wrong place for it.  The Grant Library in Starkville honors the man who crushed Mississippi.  Don’t expect any questions as to the appropriateness from the liberal left, it’s the wrong fight for them.  Social Justice Warriors and Antifa would be outraged if they didn’t hate white men and Southerners so much.

The current state of Southern politics at the close of 2017 is a Second Reconstruction.  The Confederate Battle Flag is stigmatized as the Nazi Swastika.  Historic monuments funded and erected by Southerners to commemorate Southern veterans after the end of Reconstruction are being removed.  And the anti-Semitic drunken butcher commander of the Union Army is now honored in the Deep South land he conquered.  The heritage and culture in the South is being erased at a very fast pace.  The War of Northern Aggression wages on.

Interested in more news from Mississippi? We've got you covered! See More Mississippi News
Previous Article LSU Is Going To The Citrus Bowl, But Not To Face Michigan State…
Next Article Gary Chambers And The NAACP Are Feeling Ignored, So Now They’re Suing…