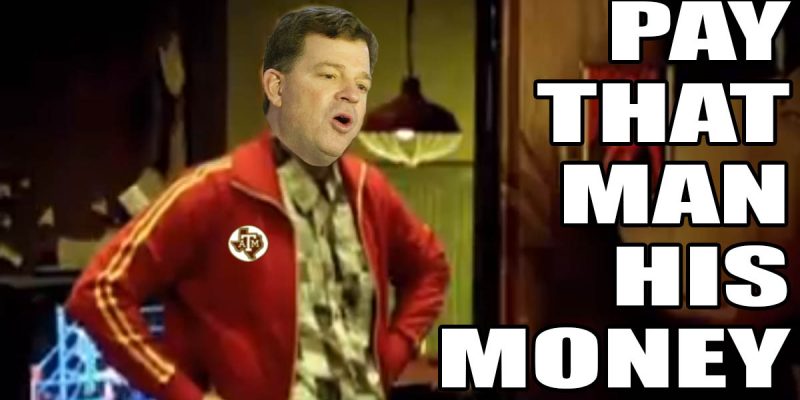 …and torches in a unified demand for Joe Alleva’s firing as athletic director. LSU’s 2016 football coaching search can now be seen in its complete perspective now that Fisher will be competing in LSU’s division for the next 10 years.

Before we get started with this discussion, let’s dispense with the things we are not going to be saying in this post. This will not be a castigation of Ed Orgeron as LSU’s football coach or the job he did in steering the team to a 9-3 record, 6-2 in the SEC. Orgeron looked like a disaster for LSU after a ridiculous loss to Troy in the season’s fifth game, and all of Louisiana was up in arms following what looked like evidence his hiring was a colossal mistake, but the turnaround he engineered was legitimately worthy of acclaim. Orgeron had what turned out to be a massive signature victory in his 27-23 win over Auburn, who will be playing in the SEC Championship Game Saturday for a berth in the college football playoffs; Auburn didn’t lose another SEC game all year. Closing the season with six wins in the last seven games and having multiple opportunities to make plays to win the game LSU lost against Alabama meant Orgeron coached the second half of the season at a level at least that of his predecessor Les Miles.

So none of this is a shot at Ed Orgeron. Nobody at this point should be trashing Coach O or saying he doesn’t deserve the job he has. He did well this year. The first five games were sloppy enough that the fans who questioned his performance weren’t wrong, but righting the ship is what good coaches do and he did it.

But Ed Orgeron was not the first choice for Miles’ replacement. Jimbo Fisher was. Fisher was Alleva’s man back in 2015 when the athletic director first began making moves to change Miles out as LSU’s head coach, and it was a poorly-executed ouster which led to the humiliation of the school for an entire month under the national spotlight as Miles twisted in the wind, so much so that school president F. King Alexander pulled the plug on the whole enterprise and left Miles in place for the 2016 season. When that began in disastrous fashion Miles was gone and Fisher became the priority candidate again.

But, if all stories of the Fisher flirtation are to be believed, Alleva wouldn’t meet the coach’s price and terms, and that’s why he moved onto Tom Herman on the way to Orgeron.

Woodward knows how to make a hire for a coach. At Washington where he was AD, when Steve Sarkisian left to become USC’s head coach he zeroed in on the best college head coach in the Northwest, in the person of Boise State’s Chris Petersen, and did what it took to sign him. At Texas A&M, Woodward zeroed in on Fisher, who he knew from his time serving on Mark Emmert’s staff at LSU, and broke the bank to the tune of $75 million over 10 years to bring him in.

That’s the richest contract ever given to a new hire for a college football coach, but it’s not going to break Texas A&M and it wouldn’t have broken LSU. In fact, if Fisher were to perform at the level he did at Florida State it’s the best money A&M – or LSU – would have ever spent.

Woodward knows this, because Woodward was around when Mark Emmert hired Nick Saban and created LSU’s football program as a national powerhouse. The athletic director at the time Joe Dean, who was a holdover from a previous regime and would soon be gone, told Emmert he could pull Saban, whom Emmert identified as the right coach to rebuild the school’s program, from Michigan State for $900,000 per year. Saban’s agent Jimmy Sexton, who is also Fisher’s agent today, quoted a price of $1.2 million per year to hire his client.

Emmert told Dean to, in words made famous from the film Rounders just one year earlier, “Pay him. Pay that man his money.” And Saban made LSU an SEC champion within two years and a national champion within four.

Honestly, after watching Fisher struggle to a 5-6 record this year – they’re set to play UL-Monroe Saturday in a makeup game postponed by Hurricane Irma which Fisher won’t coach in – we’re not all that sure he’s the coach we thought he’d be at this stage of his career. He looked worn out and exasperated, and his team’s play reflected it. Sure, FSU took an injury they couldn’t afford when quarterback Deondre Francois went down with a broken leg in the opener, but it wasn’t just bad quarterback play on display this year. The whole team looked like they didn’t care, and FSU lost games to inferior opponents. Especially in the second half of the season Orgeron’s LSU team, which was ranked a lot lower than Florida State was in the preseason, looked a lot more like a playoff contender than Fisher’s Seminoles.

So it’s entirely possible that LSU may end up with a healthier football program with Orgeron than Texas A&M will with Fisher, and at a far lower price.

The problem is, that wasn’t Alleva’s first option. His first option was Fisher. And rather than follow the Emmert/Woodward template and do the common-sense thing – namely, that if you’re trying to hire a coach in demand away from a job he’s relatively happy with, if that coach gives you a price at which he’d be willing to move you pay it and don’t waste time trying to nickel-and-dime him – Alleva tried to lowball Fisher. Depending on whom you believe he did the same thing to Herman and proceeded to lose him to Texas.

Orgeron can win a national championship at LSU and it still won’t take the stink off Alleva’s performance in running that coaching search last year. This is about process, and Alleva’s process is deficient.

So is he. LSU deserves better. Here’s hoping for a new athletic director at the Ole War Skule, sooner rather than later.

Interested in more news from Louisiana? We've got you covered! See More Louisiana News
Previous Article Garrett Graves Announces The Passage Of FEMA Reforms By A Congressional Committee
Next Article LSU Is Going To The Citrus Bowl, But Not To Face Michigan State…