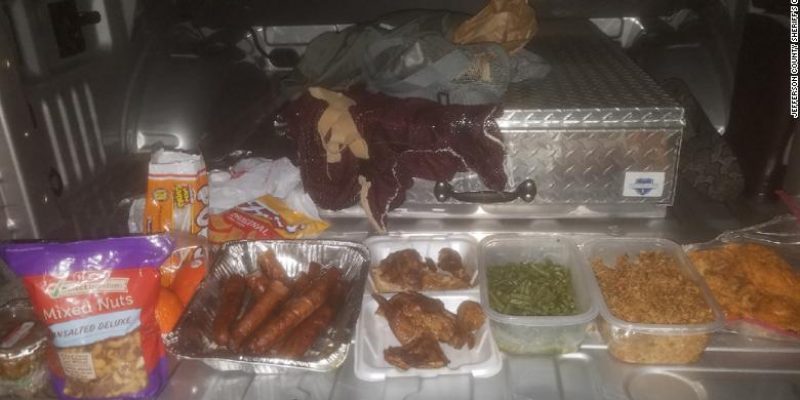 Life appears to be better inside prison, than outside of it, with perhaps the exception of prison food. Or so it appears, based on the latest news from Texas of a prison inmate who escaped, only to return to prison with a duffle bag of homemade food and beer. Maybe he couldn’t order take-out so the best way to get good food was to break out of prison and bring it back with him to share with his inmates.

CNN reports that escaping and returning to prison in Beaumont, Texas appears to be a regular occurence:

Jefferson County Sheriff’s officers and US Marshals were tipped off that inmates were escaping the federal prison in Beaumont, Texas, and crossing onto a rancher’s land that backs up to the federal complex. The inmates would then pick up contraband that was dropped off for them and bring it back to the prison.

Here’s how it apparently works. Someone from the inside communicates with someone on the outside. Someone delivers a duffle bag of requested items onto the rancher’s private property. Inmates run out to get the bag and run back. This time an inmate got caught.

Joshua Hansen, 25, is serving time for narcotics charges, got caught and was arrested. The police found three bottles of Brandy, one bottle of Whiskey, multiple bags of Buglar tobacco, prepackaged snacks and BBQ sausage and fried chicken in the duffle bag.

The food looks pretty good: homemade chicken, Mexican rice, green beans, and sausage. But if you’re going to smuggle food why not go for chicken fried steak or BBQ ribs? Either way, he most likely didn’t get to eat the food– and according to the Jefferson County Sheriff’s Office, he was charged with escape and possession of marijuana.

The police reported of the incident:

Interested in more news from Texas? We've got you covered! See More Texas News
Previous Article Convicted Felon Larry Bankston Is Back In The News, And You Won’t Believe Why…
Next Article ERSPAMER: School choice helps Louisiana’s moms, dads, and students